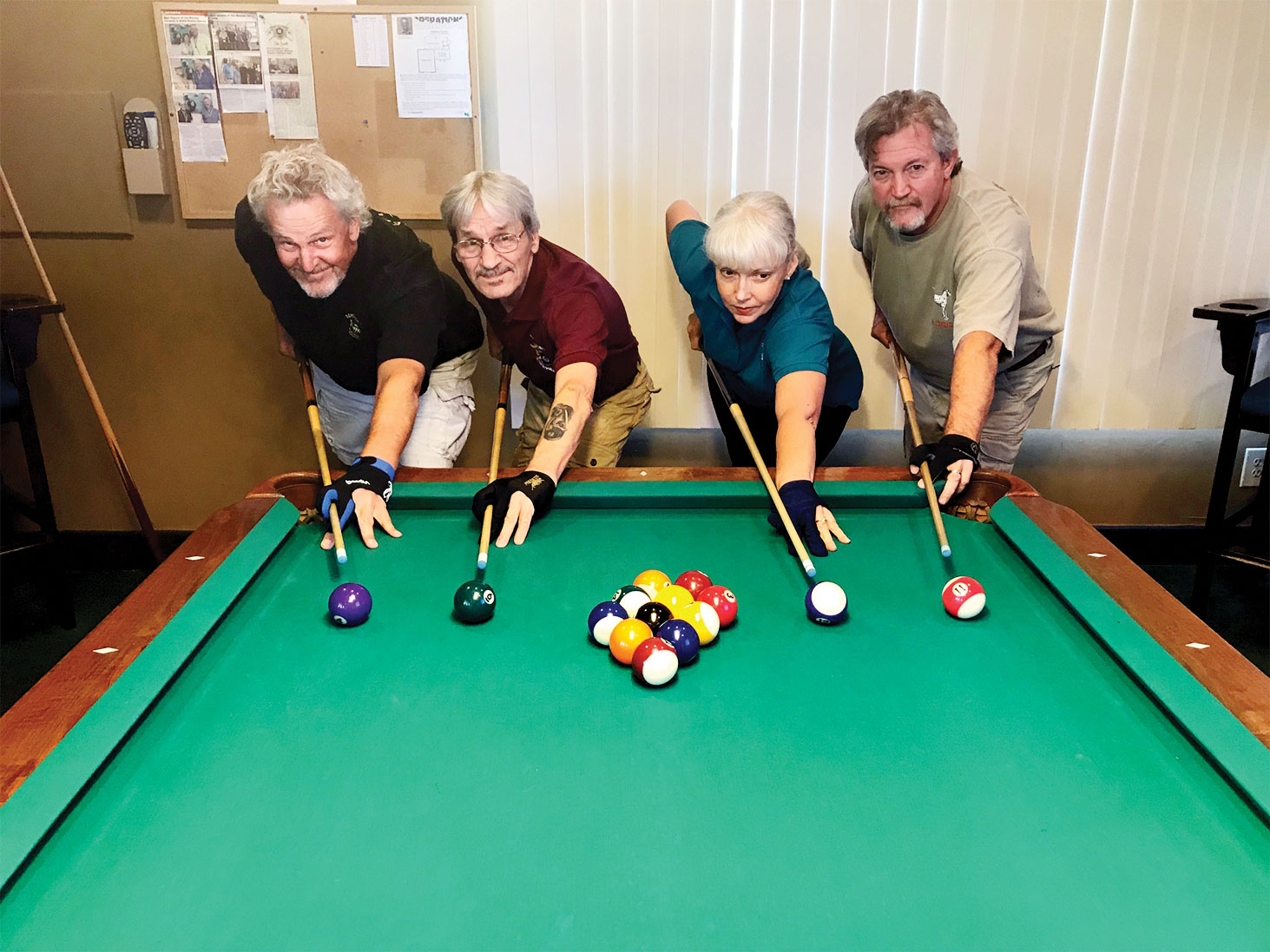 Pool Players of The Brooke wants to thank our generous sponsors Sammy’s Mexican Grille LLC. and SaddleBrooke One. On July 21, 2018 the Pool Players of the Brooke hosted a Partners 8-Ball Tournament. Tournament Directors were Dominic Borland and Joe Giammarino. The following field of 12 players gathered to play competitive 8-Ball. After a skill rating controlled draw where the top six skill rated players from the Pool Players of the Brooke would draw a partner from the balance of the field, the six partners were Jay “The Shamrock Shooter” Clary and Joe “Fast Eddie” Giammarino, Gary “One Rail” Barlow and Julie “Cutter” Ferguson, Tom “Blind Squirrel” Barrett and Dan “Oh No!” Stebbins, Nancy Barrett and Dominic “The Doctor” Borland, Randy “Thin Man” Smith and Jim “Shooter Fabio”, Jan “Banker” Stebbins and Karl “English” Knight (Ranch).

Jay Clary and Joe Giammarino’s road to victory started badly by quickly losing their set to Dan Stebbins and Tom Barrett in their first-round match. In the loser’s bracket, Jay and Joe got into stroke and defeated Jan Stebbins and Karl Knight. Then Jay and Joe delivered Jim Fabio and Randy Smith their second loss of the tournament. Next up were Dan Stebbins and Tom Barrett, Jay and Joe revenged their first round loss by sending them home with their second defeat of the day. Sitting on the hill waiting for an opponent to come out of the loser’s bracket were the formidable foes of Nancy Barrett and Dominic Borland. Jay and Joe would have to beat them twice to win this tournament. Jay and Joe were up to that difficult task on this Saturday as they disposed of Nancy and Dominic in two straight sets to take first place and bragging rights.

The day started with some of the participants meeting at the RoadRunner Grille for an early lunch. The 8-Ball Partners tournament started at 1:00 p.m. and lasted three hours. We competed and met some new friends that shared our passion, that is a good day! Rack ’em up!

The Pool Players of the Brooke wants to extend a big thank you to all our participants and sponsors. A special thank you to the ladies who stepped up to participate, Nancy Barrett, Jan “Banker” Stebbins and Julie “Cutter” Ferguson.

This tournament will most likely be the last of the Pool Players of The Brooke’s until the anticipated SaddleBrooke One’s Starter Shack expansion is completed. SaddleBrooke’s billiard enthusiasts patiently await this expanded venue for billiards in our community. Please hurry!