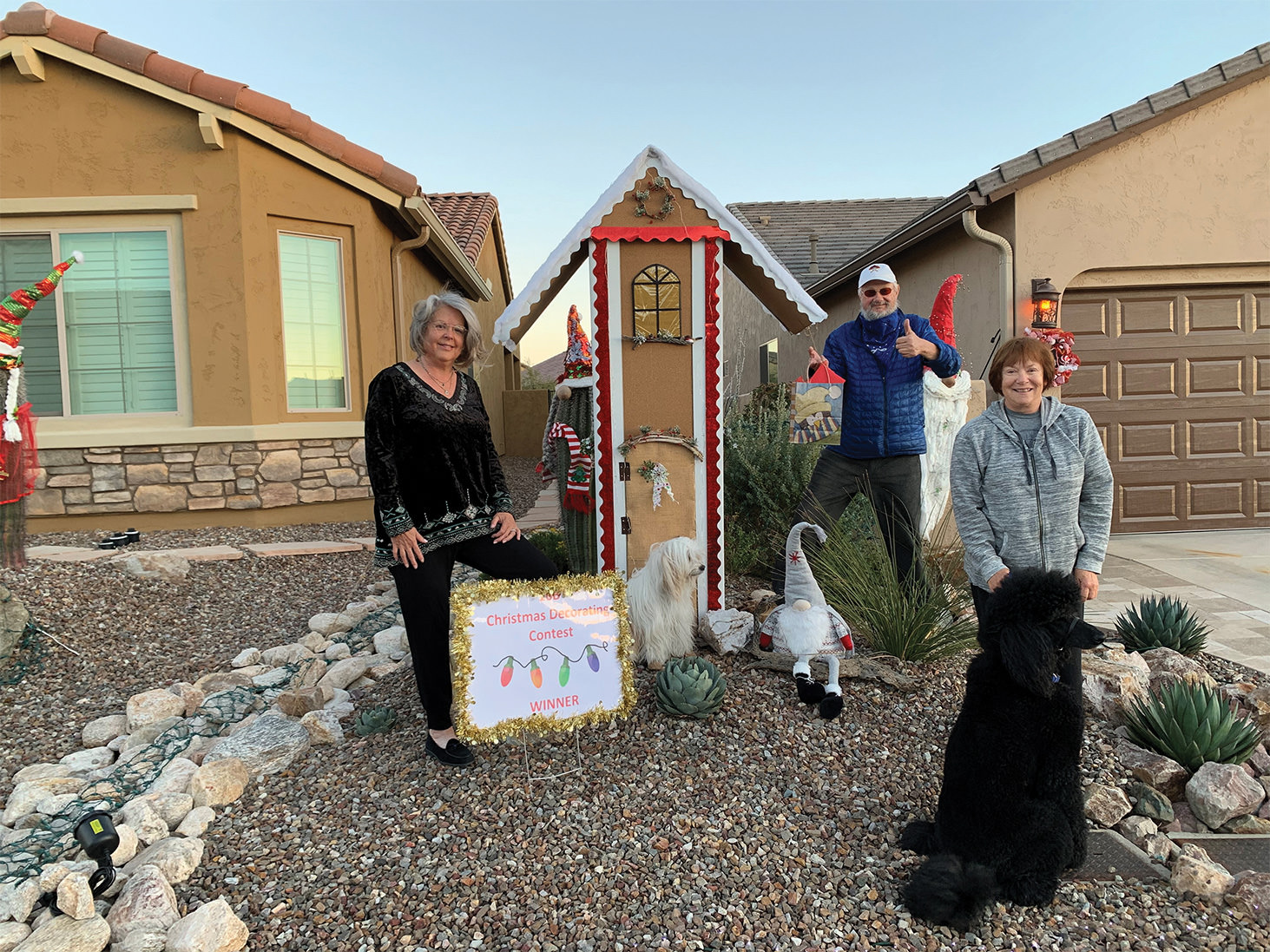 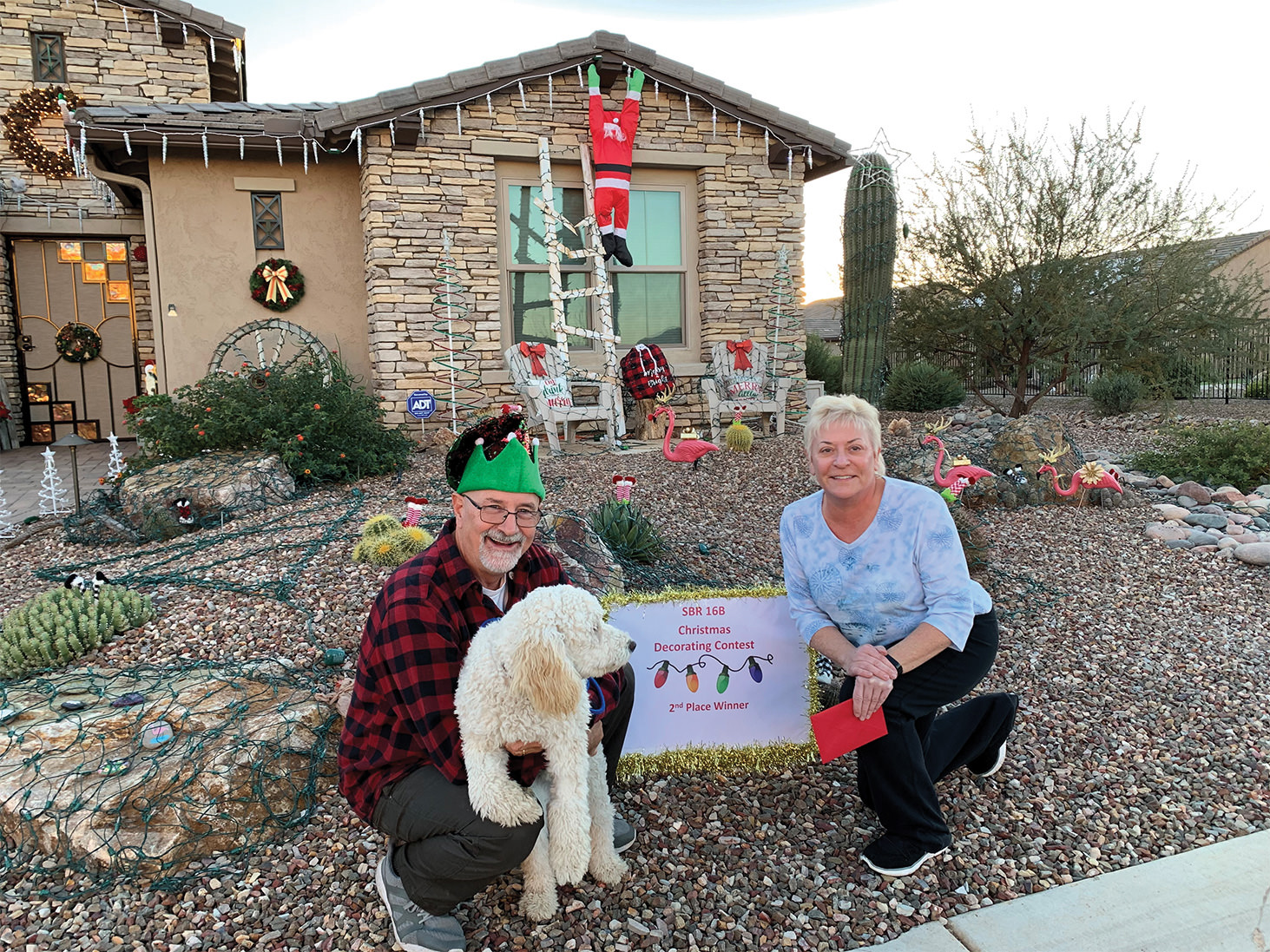 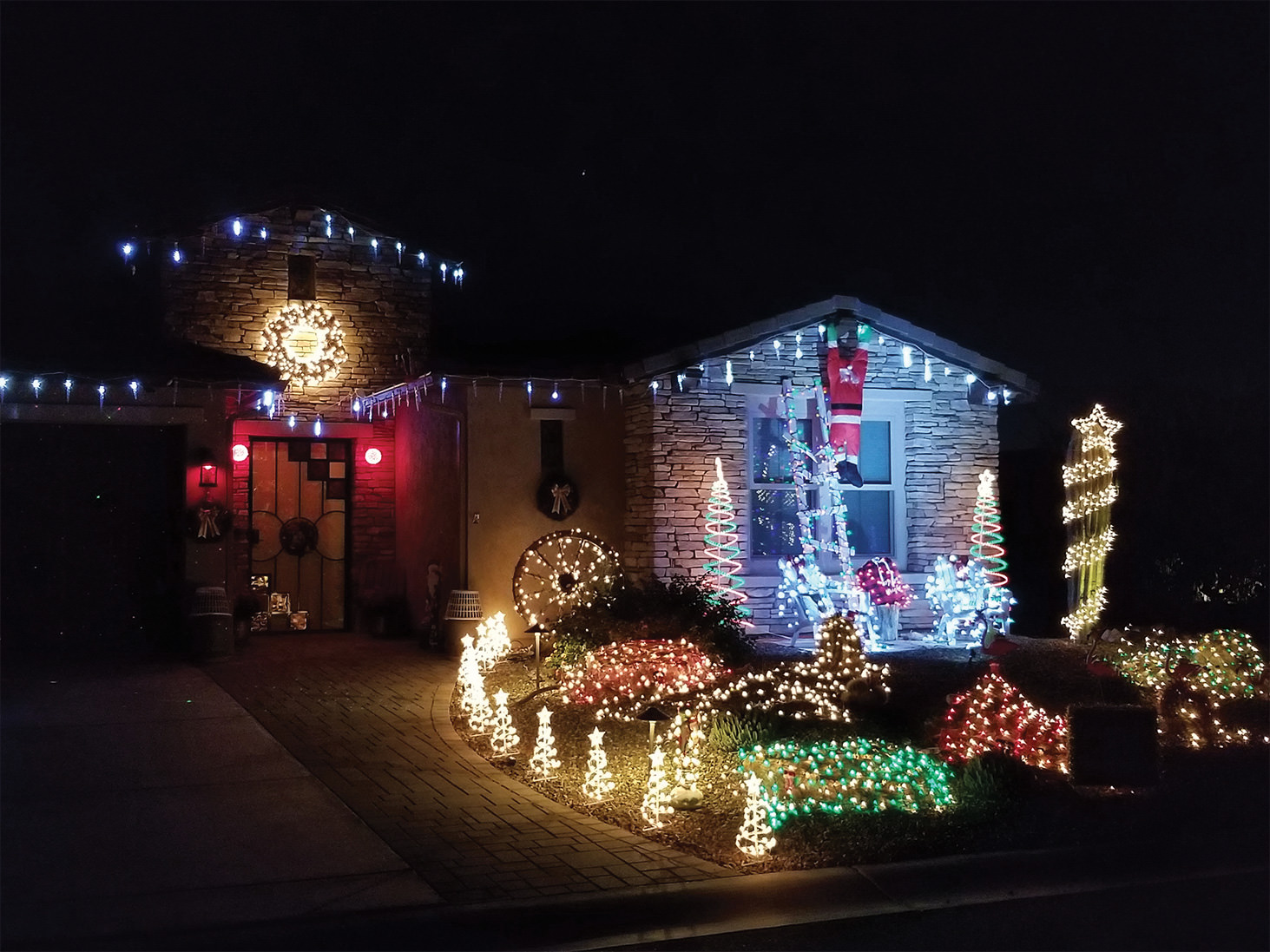 Given a challenge to decorate for the holidays, Unit 16B embraced the opportunity and awarded the three best. Between Dec. 13 and Dec. 20 neighbors voted for who they believed provided the best decorations in the community. The competition was stiff with snowmen, angels, gnomes, Santa, a golfing moose, and even a monolith shining throughout.

Many votes were cast and the Gnome Village outshined the rest with Sherann Ellsworth, Bruce MacIver, and Joy Hellard’s homes winning the top prize. Second place went to Pete and Roxanne Watson for their light spectacular that included a hanging Santa, flamingos, and flying pig. Following closely behind were third place winners Tom and Pam Engelhardt for their elegant Arizona display.

The neighborhood was highlighted during the community holiday golf cart tour. 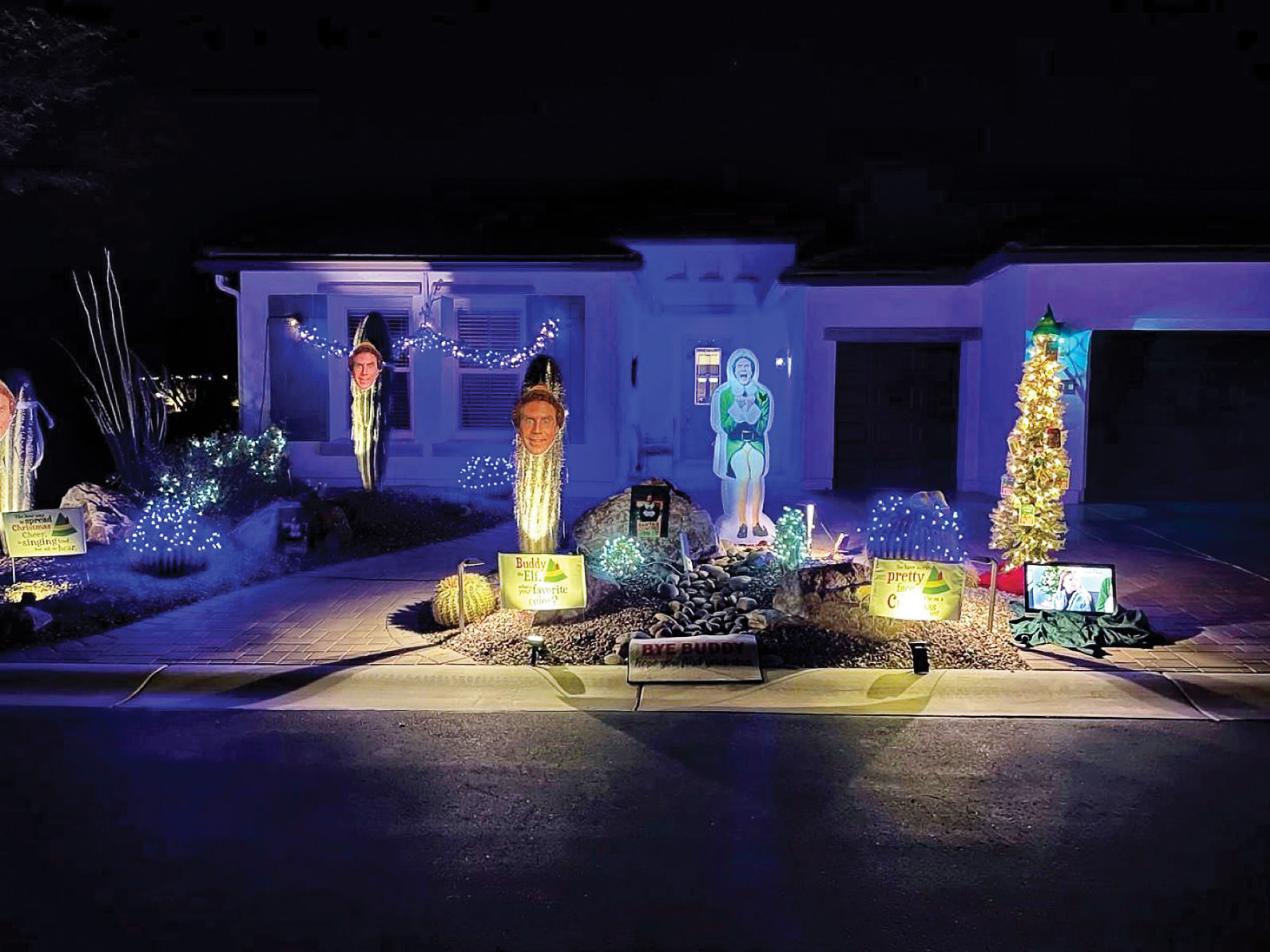 What? No Unit 8A Holiday Party this year? No Alastair and his Ranch Carolers that filled our ears with beautiful music? No exchange of silly gifts that would reappear year after year? What can Unit 8A do to enjoy the holiday season? Hold a contest? Of course! Everyone should get outside and decorate their homes for all SaddleBrooke Ranch to enjoy during these dark, homebound days and year!

Unit 8A had a Lights Spectacular contest. There was a creative committee formed, consisting of Judie Townsend, Denise Doepke, Kathie Calbone, Lani Warren, Marci Whitehead, and Betty Ryan. These ladies along with their husbands decided there would be three categories—Most Creative, Best Visual Effect, and Funniest! Judging was held on Dec. 16 by all the Unit 8A residents.

It was a tough decision as there were so many houses that took on the challenge of illuminating our unit, that we are sure the people in Summerhaven on Mount Lemmon could see the sky aglow above Unit 8A! The winners were presented with a unique painted rock that was decorated with the Unit 8A logo. These imaginative and coveted prizes were designed and made by Unit 8A resident, Dick Ryan. The lucky winners were Bob and Judy Townsend for Most Creative, Tim and Julie Malone for Funniest, and John and Marci Whitehead for Best Visual Effect!

The winter wonderland Holiday Lights of Unit 8A were appreciated and enjoyed by all of SaddleBrooke Ranch during several golf cart drive-bys throughout the holiday season!

We are looking forward to Christmas in 2021 to add to our Lights Spectacular and get back to enjoying Alastair’s Ranch Carolers and our silly gift exchange! Till then, happy New Year to all from Unit 8A! 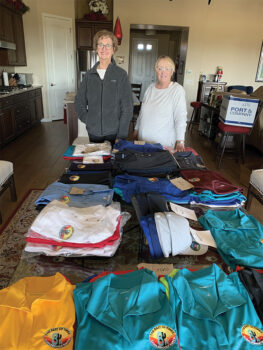 Dian Gowen, Chairman of the Logo Committee, and committee member Julee Malone check and sort the Unit 8A logo clothing items prior to distribution to residents.

Having the Best of Times

If you spot Ranchers wearing a hat or shirt or carrying a golf towel with a colorful “The Best of Times” logo, you know they happily live in Unit 8A.

The Unit 8A logo project started in January 2020 with a logo contest. Seven Unit 8A residents submitted their own unique designs, and unit residents voted on their favorites at the group’s monthly happy hour. The winning logo, designed by Sheila Davidson, was unveiled at the unit’s “Four Years Under the Desert Stars” celebration in February 2020. The logo captures “The Best of Times” with a desert cactus against a colorful background and overlaid with Unit 8A.

With design in hand, the Logo Contest Committee researched digitizers, embroiderers, and clothing suppliers, no easy task in the middle of the COVID pause. They ordered a variety of samples and sizes for both men and women, and organized an outdoor, socially-distanced shopping boutique prior to the unit’s October happy hour. In total, Unit 8A residents ordered 88 items with small or large embroidered logos, including shirts, hats, aprons, and golf towels. Items were sorted and delivered to residents in early December, just in time for a holiday gift.

The logo is already popping up in on-going unit activities and events. Rich Osterlund and Bill Oprish received golf towels with embroidered logos as winners of Longest Drive and Closest to the Pin, respectively, in the Men’s Golf Tournament in November. The Bob Townsends, Tim Malones, and John Whiteheads’, winners of the unit’s Holiday Lights Contest, received an award featuring the colorful logo on a painted rock.

The Committee, chaired by Dian Gowen along with committee members, Evie Thompson, Julee Malone, and Sheila Davidson is already planning for future orders. Who knows where the logo may next show up!