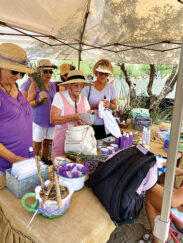 Shopping at the pop up shop (left to right): Vicki Froistad, Julee Malone, and Kathie Calbone 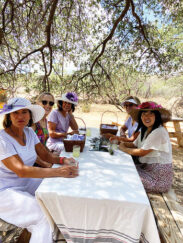 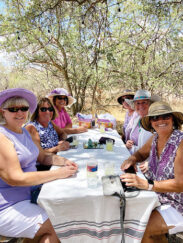 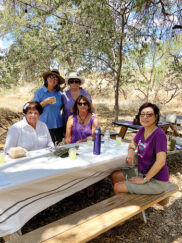 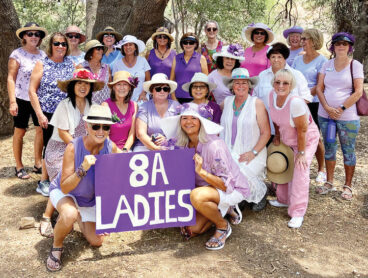 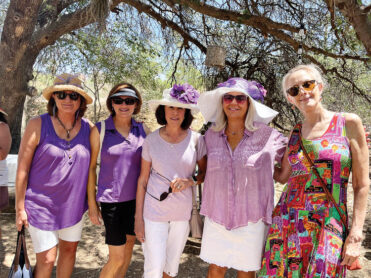 The Unit 8A Ladies Lunch with Lavender

On the last day of June, 2021, 23 Unit 8A ladies took a short road trip off of the SBR property for their monthly luncheon. Five cars caravaned up to Life Under the Oaks Lavender Farm, in beautiful Oracle, Ariz. Many of the women wore the color lavender, and several donned a decorated hat for a chance at a door prize, provided by the owner Caroline Blair. The lunches were preordered and prepared by the Patio Café, and were wonderfully presented in a variety of colored baskets. The choices on the menu all included an element of lavender, from lavender chicken salad to lavender cookies, and tasty lavender lemonade. Upon arrival, we started our afternoon with an informative tour of the farm, which included a stop at the Pop-Up Lavender Shop, where several women practiced retail therapy. We then meandered to the shade of the Five Sisters Oak Tree to enjoy our unique lunches. After our picnic lunch, we played a get-to-know-your-neighbor dice game where each attendee answered a random question about themselves. It was lots of fun learning about our unit friends. Life Under the Oaks Lavender Farm has an incredible vision for future growth. They currently have workshops, retreats, pick-your-own days, an area for children to enjoy, farm animals, and the most clean and best smelling port-a-potty in the region. It is going to be exciting to watch their dreams come to life. Also amazing is how much work they have done at their new property in just a year’s time. The lavender farm is a true gem. We are lucky to have them in our community! It is always a “win” when you shop and buy local. Visit lifeundertheoakslavenderfarm.com or call 520-820-3454 for more information. 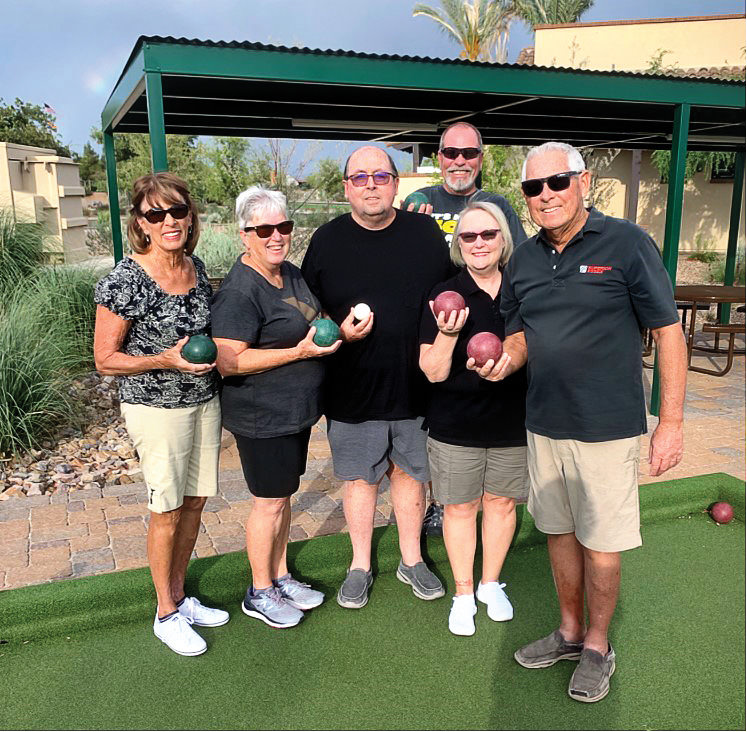 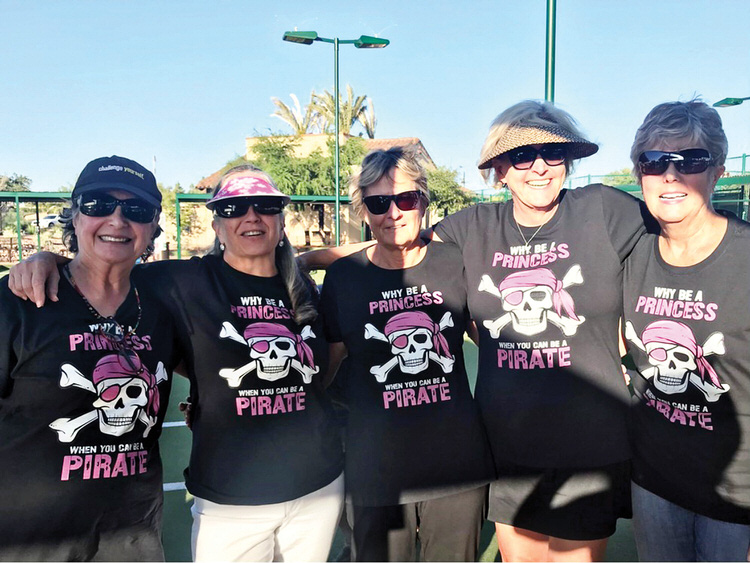 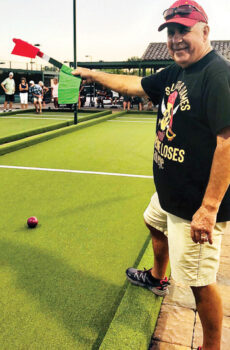 As early as 5000 B.C., Egyptians played a form of bocce ball, but it was the Italians who developed the game that we know today. The British shared the current form of the game with America, leading George Washington to build a court at Mt. Vernon in the 1780s. Bocce ball, the second most popular game in the world, included players like Galileo, Emperor Augustus, and Sir Francis Drake. Present day brings us to SaddleBrooke Ranch, where the bocce ball bonanza is in the making.

I was watching a golf match on TV when my wife approached me and asked, “Would you like to learn to play bocce ball?” My off-the-cuff response was, “Isn’t that the game played by old people on cruise ships?” My outlook today is very different from March because I actually learned how to play bocce ball and realized I am one of those old people or mature adults.

I live in unit 16B, one of the most active units in SaddleBrooke Ranch. When the call for bocce ball players went out to form teams, our response was tremendous. So many people showed an interest that we were able to field two teams with over 20 players. Many had no idea how to play bocce ball or if it was even legal in this country. We all had to learn about court etiquette, rules, attire, and, most importantly, how to bend down far enough to throw the ball down the court without hobbling home.

Our two teams are the Pallino Pirates and Marge’s Marauders. The Pirates quickly became a team of finesse, with store-bought uniforms, beverage containers, and finger sandwiches after the match. Their attitude was “take no prisoners” and “if you’re not first, you’re last.” They even had one player who may have played the game in the ’60s but had a fuzzy memory of the event! On the other hand, the Marauders forgot to buy uniforms but looked to beat the Pirates with determination and luck. We decided that hootin’ and hollerin’ and just having fun were the keys to a great season.

Our first training session went well because no one was injured or needed medical help. The biggest decision that morning was deciding which hand to use when throwing the ball. In the end, most were as good with either hand, and just getting the ball in the right time zone was close enough. At the end of the day, it was quickly decided that the Olympics are a road too far, and we should just go out and have fun. I think we bonded that day and became a team, nay, a family of high rollers in a community of good people.

Now that league play has started, the fun and excitement of each game seems to have intensified, not in a competitive sense but as excited friends. Plenty of oohs and aahs echo through the courts, quelling only at game’s end. It is extremely difficult not to have fun playing bocce ball because it is exciting, fun, and rewarding to all involved. If you have never played bocce ball, you might just be next year’s MVP, or you might have a blast learning a new game.