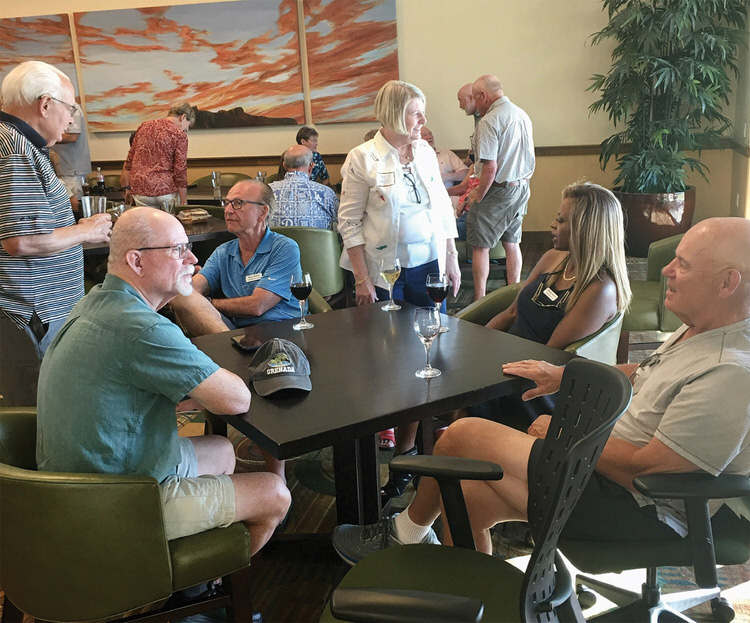 Unit 2, one of the first sections built at the Ranch, met for the first time on May 16 for happy hour. We had a great time and will do it again in the fall. 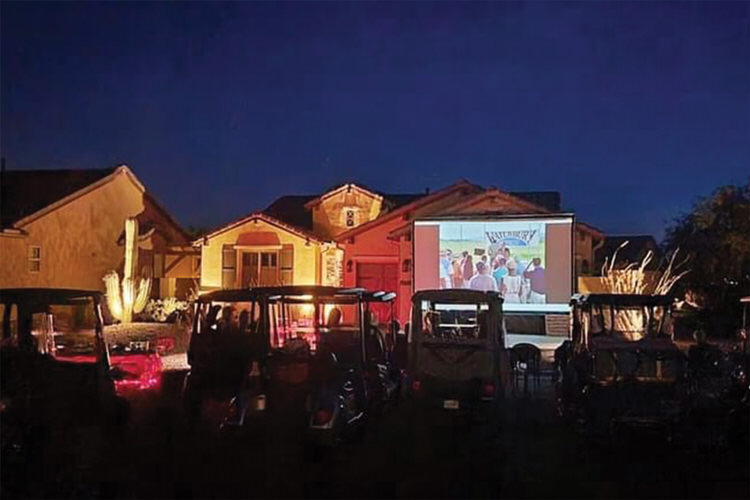 Who doesn’t fondly remember drive-in movie nights with popcorn, candy, sticky treats, and cold drinks? Friends and neighbors of Amanda Kaminski and Jeff Sater relived that experience as they pulled up their golf carts and enjoyed watching the antics of Happy Gilmore.

Raising the giant screen that covered Amanda’s double garage door required a lot of extra help. Joining her and Jeff in that task were Chuck and Denise Smith and Patrick Murray. Meanwhile, other attendees filled the snack tables and socialized before the sky was dark enough for the movie to start.

This Memorial Day gathering in 4B was in honor of John Kaminski. It was a celebration of his passion for hilarious movies and his love of life. Thank you, Amanda and Jeff, for hosting a fun-filled evening. 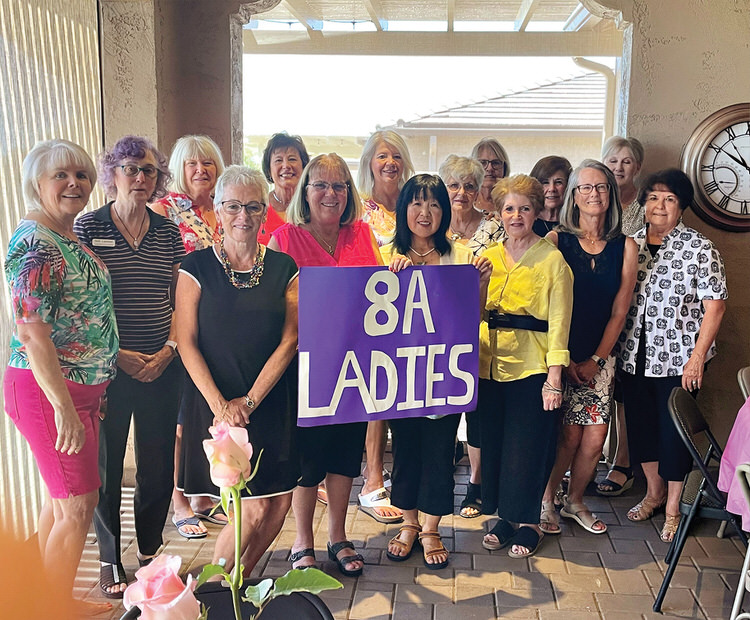 Mother’s Day Brunch in Unit 8A

On Sunday, May 8, a Mother’s Day brunch was hosted by Brenda Pooler and co-hosted by Shelley Ziegler for the ladies of Unit 8A. There were 18 fabulous women in attendance. All brought a picture of their mothers, and most shared a story about their mom. Several stories brought laughter; some brought tears. The guest of honor was Shelley Ziegler’s mom, Mary, who flew in from Madison, Wis., to spend Mother’s Day week at the Ranch. There was plenty of wonderful food, including Mary’s almost-famous “Monkey Bread” and a “Momosa” bar with several varieties of juice and berries. There was also a build-your-own yogurt parfait station. Of course there were traditional brunch favorites such as bacon, sausage egg bakes, and hash browns. Shelley Ziegler would like to extend a special thank you to Unit 8A for making her mom’s week so special. 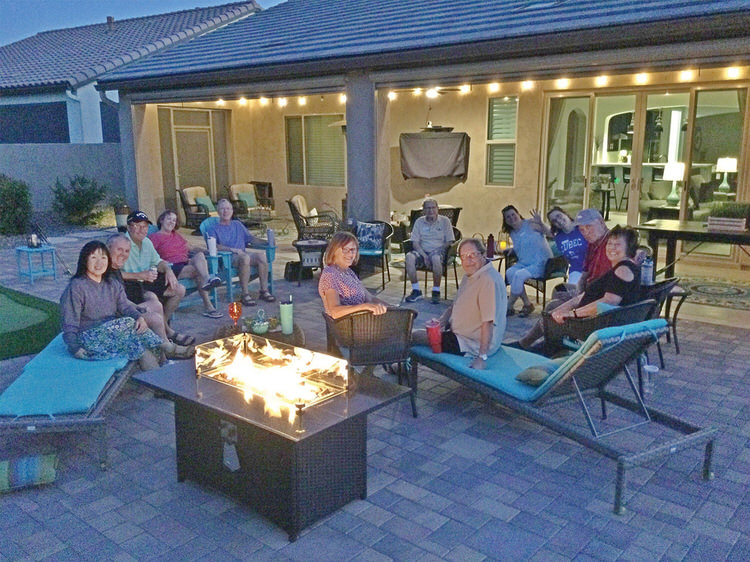 Unit 8A Sparkles for Happy Hour No. 75

On Friday, May 20, forty residents of Unit 8A donned their best bling to celebrate 75 months in a row of monthly Unit 8A Happy Hours.

Since the traditional gift for 75th anniversaries is diamonds, and the contemporary, modern gift is gold, what better way to celebrate a 75th happy hour than with an evening that sparkles with bling?

As always, Unit 8Aers showed their creativity and sparkled with their own definitions of bling, including jewelry, decorated hats and clothing, shoes, hair ornaments, tiaras, and even sequin-wrapped arm casts.

The evening started in the cul-de-sac with an overhead group photo courtesy of unit resident Curt Kamada and his drone. Then, back by popular demand, residents gathered in small groups at four host homes. There were three rotations, with guests drawing the location of their next host home at the end of each 25-minute rotation. Mark and Lani Warren, Curt and JoAnn Kamada, Frank and Linda Sherfy, and Sheila Davidson and Marty Knezovich served as hosts for the evening.

Guests appreciated the small group format, so plans are for a repeat throughout the summer. 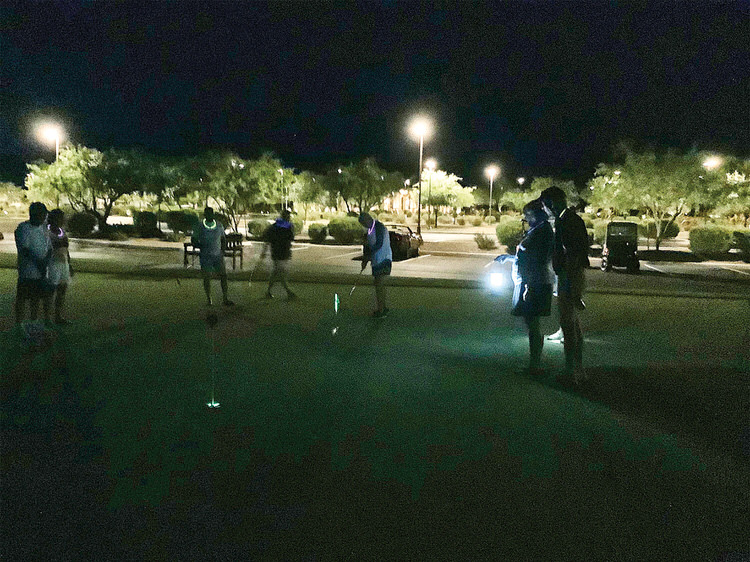 Thirty-six residents from Unit 8A enjoyed a lovely evening of putting under a full moon on Sunday, May 15. Judie Townsend, Kate Thomsen, and Evie Thompson headed up the committee, which researched and purchased the glow equipment, provided prizes and light snacks, and assigned the teams as well as set up decorations on the putting green. Each of the nine teams had four members consisting of accomplished golfers to those who had never putted before. The use of Glow Golf Balls gave a different feel than putting with a regular golf ball for an additional challenge. The putting green was decorated by various glow sticks to mark the starting point for putting as well as the hole. You could hear lots of shouts for joy when the golf ball landed in the hole with just one putt and a number of sighs when it took the ball four putts to reach the hole. There was also a money bag at one hole with dollars waiting for a hole-in-one—unfortunately, there was no lucky player.

The winning team with the fewest number of putts went to Jeanne Osterlund, Bob Townsend, Terri Vossekuil, and George Patterson. The winner of the most holes-in-one went to Bill Oprish with a total of six. The excitement mounted as we had a three-way tie for second place for holes-in-one. All gathered around to watch John Whitehead, Shelley Ziegler, and Bob Townsend putt for the honor of second place. And the winner was … Bob Townsend.

The evening ended with a view of the supermoon called the “Flower Blood Moon” eclipse.

Fun was had by all, agreeing that this event was a keeper and should be repeated in the future. 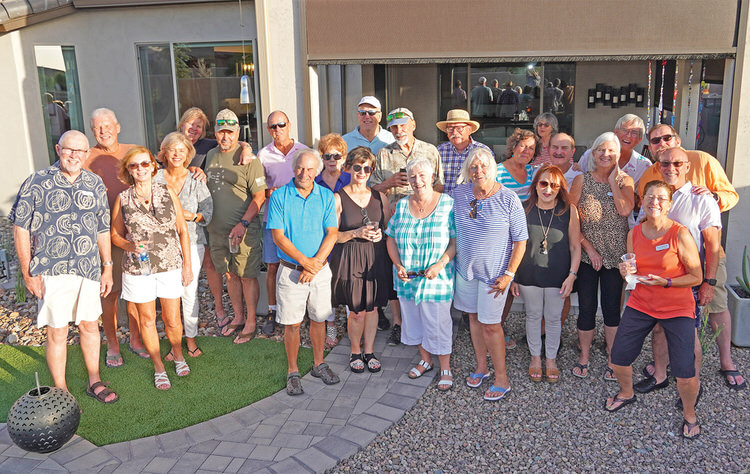 Unit 16C’s May block party, hosted by Joyce and Don Cox, was a hit of the month. Pineapple martinis, sugar cones with chocolate edges and sprinkles filled with summer berries, homemade empanadas, and spicy dips with veggies were among the more than 20 appetizers and drinks available. A beautiful warm, but windy, evening had us all outside admiring the Cox’s extensive landscape, including Don’s whimsical glass mobiles that he has made in the SaddleBrooke Ranch glass studio. (Photo by Roger Cowles) 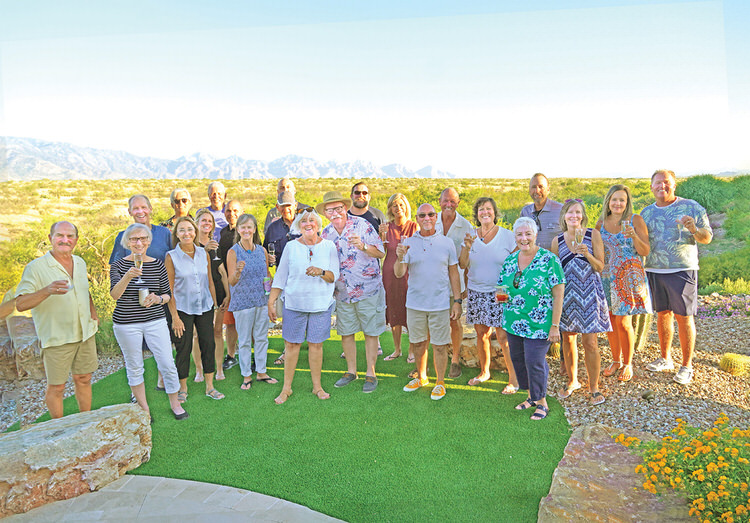 Seventieth anniversaries are few and far between, but Unit 16C had a doozy in May. Homeowner Hans Lange celebrated the 70th anniversary of arriving at Pier 52 in New York Harbor with his family on May 24 after an 11-day sail from Germany. Glenna Matthews, Susan Lucarelli, Roger Cowles, and Lucy Lange put noses to the grindstone and got the surprise party for Hans planned and achieved in 10 days. Everyone who was in residence came, but Hans thought he was going to a dinner for six to celebrate. Walking into Susan and Roger’s home to Neil Diamond’s “America” song playing, he was shocked to see some 30 neighbors ready to celebrate. Food and beverages included bratwurst, German potato salad, baked spaetzle, German beer, and German chocolate cupcakes for dessert. 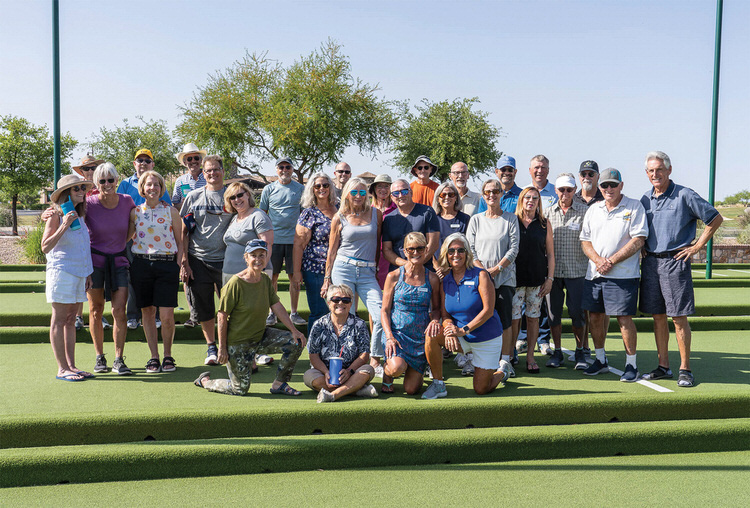 Unit 21A’s Second Get-Together Was a (Bocce) Ball of Fun!

We had a fun gathering to welcome our new Villa neighbors to Unit 21A for an afternoon of bocce ball, treats, and conversation. It was a beautiful day, and a good time was had by everyone. 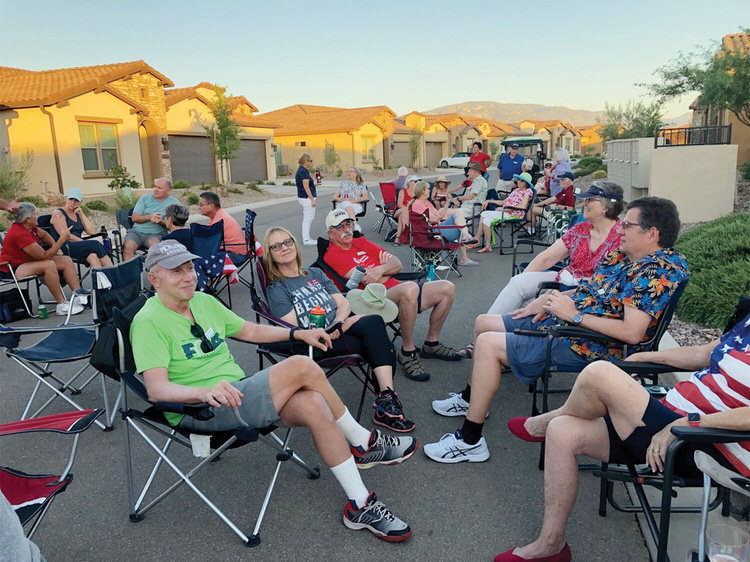 Villas at 14B Block Party

The Villas at 14B had their Memorial Day block party, and what a turnout! Everyone brought a dish to share, along with their outgoing personalities and holiday outfits. Thank you to Barb Wallis, who hosted this best turnout block party to date.