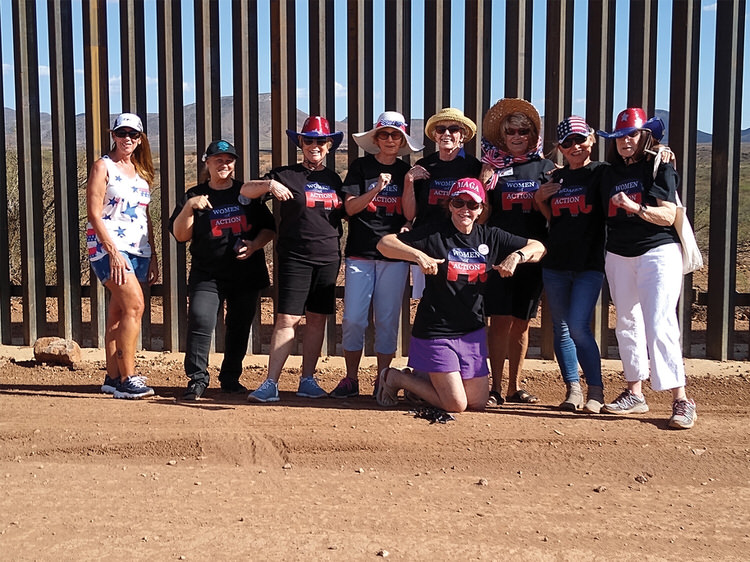 The SaddleBrooke Women of Action Club recently attended a border rally located next to the border near Hereford, Ariz. The rally, held on a rancher’s land that adjoins the wall, was interesting and informative enough to help us forget the over 100-degree heat. As we gazed at the massive wall, we could see another nation’s border patrol and it brought home what a border really is. Our Constitution requires the federal government protect states from invasion. (Article IV, Section 4) In this case, the invasion is masses of people who hopefully want a better life. We gained a better understanding of why people want to come to America, and we realized what a privilege it is to be American citizens. We do want that for others, but it was troubling to contemplate the massive flooding into our country without vetting or even knowing who these people from countries all over the world are. The border wall in the sector where the rally occurred is complete, but without the technical devices to enhance its effectiveness. Those who get through often wreak havoc on American ranchers, or even more tragically, lose their lives in the fierce heat.

We learned that in addition to the controversial aspects of our open border, there were even more concerns. For these people to get to the border, they pay exorbitant fees to the drug cartels, who often force them to carry illegal drugs on their person. Unaccompanied children with no biological commonality with the “families” they are travelling with are at risk, pawns in a deadly game of drug and sex trafficking.

Many sheriffs from across the nation attended and attested to the fact that the entire nation is at risk from this unwarranted invasion. A sheriff from Massachusetts said his state has been inundated with people flown into communities without the knowledge of officials, resulting in massive public health issues, public fund shortages, and crime mostly related to drugs and alcohol.

The biggest problem, however, is the exponential increase in drugs entering our nation, especially fentanyl, a deadly and addictive drug that only takes minute amounts to kill a person. The illegal fentanyl, packaged as legitimate prescription drugs such as Percocet, often contains lethal doses of the drug, posing a significant threat. There has been an enormous increase in the number of confiscated drugs since the border has become so porous, posing a danger to all, as proved by “Angel Families” who spoke of their relatives and friends killed by either illegal drugs or crime. The cartels are using the people pouring over the border as a diversion to facilitate illicit drug and sex trafficking—the modern slavery.

It was a sobering visit and a reminder that we should all understand our republic, its laws, and Constitution, and insist our elected officials observe them for the good of all or our nation will no longer be a haven for those seeking a better life.