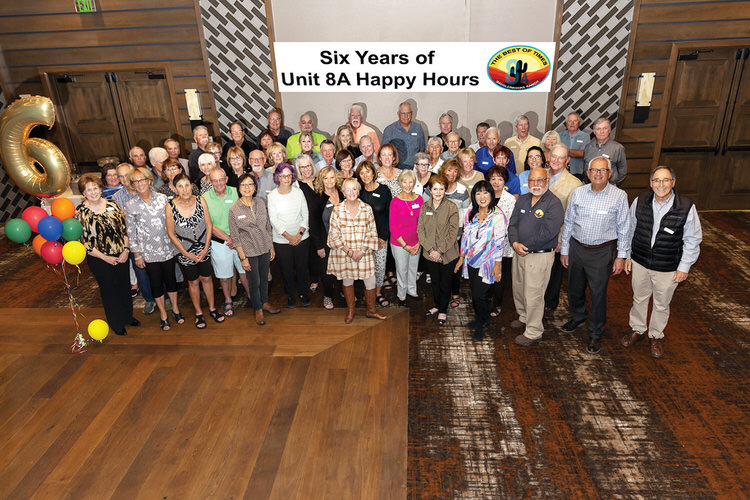 Residents of Unit 8A pose for the annual Unit photograph in celebration of six years of monthly Happy Hours. (Photo by Steve Weiss)

“This is Us”—Unit 8A Celebrates

Six Years of Happy Hours
Janelle Authur
When the first residents of Unit 8A met for happy hour at the Bistro in March 2016, no one imagined the unit would still be meeting for monthly happy hours six years later. With the happy hour streak unbroken, 57 Unit 8Ars gathered at the Sol Ballroom on March 19 for “This is Us”—a Celebration of Who We Are and Six Years of Happy Hours.
The evening’s program was designed to be broader than just a look back at year six. The “This is Us” theme weaved through the evening and reflected not only who residents are as Unit 8Ars, but also as individuals—where they came from, their pre-Ranch life, and what they do individually as Ranch residents.
As guests arrived, they were directed to the guessing game table festively decorated with colorful tie-dye bandanas and a balloon bouquet with, of course, a 3-foot “6” balloon at the center. Guests estimated the number of items in each of five Mason jars. Each game, described in a rhyme posted by each Mason jar, represented a slice of Ranch life—pennies saved to retire, birthday candles, golf tees, poker chips, and popcorn kernels.
After the annual group picture, guests were welcomed by hostesses Janelle Authur, Denise Doepke, and Sherry Weiss. The ladies continued the evening’s theme by reading “A Tribute to the Residents of Unit 8A—This is Us,” a poem written by Janelle and Denise. The poem began with Unit 8A as it “is” now—53 homes, 98 residents from 17 states, a six-year happy hour streak, a Unit logo, and how residents have adapted to the Arizona desert. It continued with where residents came from—big cities, small towns, farms, mountains, water, and plains, then listed their many professions and careers, all in rhyme. The final section described life once settled at the Ranch, listing all the sports, clubs, groups, boards, travel, and ending with a tribute to the unique camaraderie developed within the Unit in the past six years.
Guests were treated to two slide shows. The first during happy hour was a compilation of individual Unit 8Ar’s activities during the past year—travel, celebrations, sports, dancing, and life in general. The dinner slideshow pictured monthly and special Unit 8A events during year six, including Five Years of Happy Hours; A Whimsical Afternoon by the Sea in Lubec, Maine; Block Party; Milestone Birthday Party; Bunny Scavenger Hunt; Bunco Bocce; Lavender Farms; and a downtown play, to name a few.
Lastly, guessing game winners were tallied and announced. Frank Sherfy was closest to the number of pennies without going over, CJ Utecht—poker chips, Paul Thomsen—golf tees, Judie Townsend—popcorn kernels, and Vicki Froistad—birthday candles. Each received a gift in addition to the game, with Frank the big winner of the pennies in the Mason jar plus seven small jars of pennies, for a total of almost $30. Frank also won the raffle prize, a blanket embroidered with the Unit 8A logo. 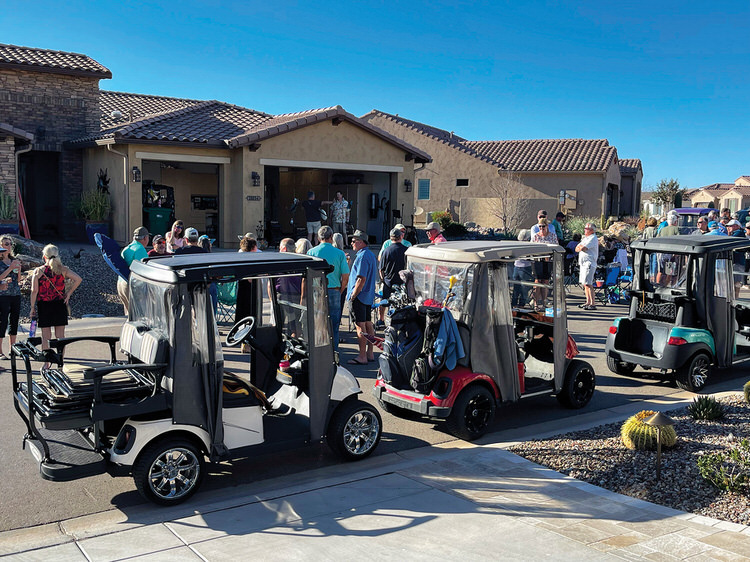 Unit 10 residents gathered for their annual driveway and street dance.

Unit 10 Celebrates the Arrival of Spring

SaddleBrooke Ranch Unit 10 residents showed up in force for the third annual “Unit 10 Driveway & Street Dance.” Returning with a host of songs that we all remembered from the ‘50s, ‘60s, and ‘70s were fellow SaddleBrooke Ranchers Andy Waddell singing lead vocals, Jay Hall on bass guitar, and newcomer Karl Knight on acoustic guitar. They call themselves “That New Band” or T.N.B. for short. Unit 10 residents danced, sang, and clapped to celebrate the return of spring here at the Ranch. This musical event was staged in the driveway of Jeff and Judy Smith’s East Pinyon Drive home and extended out to the street! It was a wonderful way to celebrate spring and send the resident snowbirds off to their summer adventures. 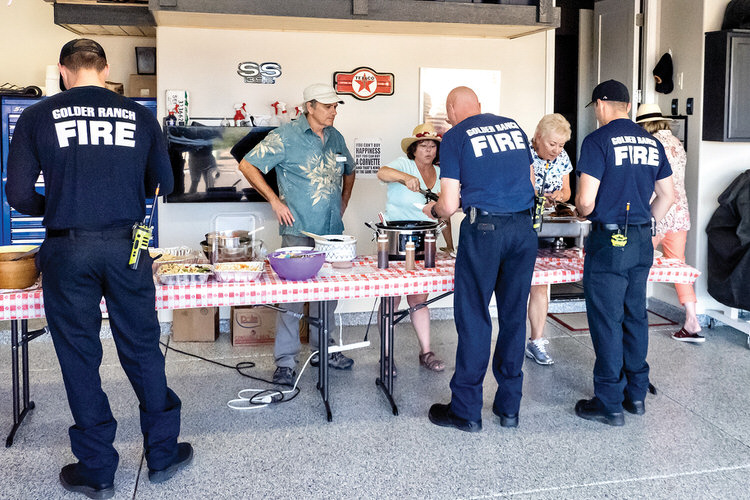 Our firemen enjoy dinner after fighting a structure fire in Oracle.

On the evening of April 8, Unit 16B hosted a BBQ for its residents. Warm breezes carried tantalizing scents of smoked pork, beef, chicken, and shrimp down Dead Wood Trail, across One Horse Lane, and onto Happy Jack Trail. The T.N.B Band of SaddleBrooke Ranch, whose members—Jay Hall, Karl Knight, and Andy Waddell—played favorite “golden oldies” from the ‘50s, ‘60s, and ‘70s while more than 80 residents heaped their plates with generous portions of food provided by 16B’s excellent cooks. The tables, groaning under the weight of delicious dishes, lined Bob and Shirley Lewis’ garage with an endless assortment of BBQ, salads, sides, and desserts. Our firemen were able to join us after fighting a structure fire in Oracle. They enjoyed the opportunity to have a home-cooked meal, listen to the band, and chat with Ranch residents. The evening was terrific and a perfect example of why people choose to live at SaddleBrooke Ranch. Residents laughed, danced, and ate their way into the evening serenaded by talented musicians.

The 16B residents want to give special thanks to Bob and Shirley Lewis, John and Mary Green, and Abby and Jerry Foote for donating their garages and driveways to host the event. A further “thank you’ goes to The Pitmasters, who provided the residents with succulent BBQ perfection—Wayne Adams, Jim Hynes, Bob Frank, Tom Engelhardt, Bob Lewis, Will Wells, and Pete Watson. Additional thanks to all 16B residents who donated tables, chairs, and delectable side dishes, which made the event truly epic. Lastly, a big “shout out” to the 16B Activity Committee for organizing, setting up, then cleaning up in the dark to make this gathering a wonderful time for all.

The only hiccup, after the event, was when Bob and Shirley Lewis’ garbage disposal committed suicide and caused a tidal wave of historic proportions in their kitchen. Banding together, 16B residents flung themselves into crisis mode and attacked the food-clogged tsunami with shop-vacs, towels, and anything that absorbed moisture. There is gossip circulating in 16B about the heroism of the band who returned to the stage and played the Titanic’s theme song, “Nearer My God to Thee,” until the situation was under control. However, it was dark, and this may only be a rumor. One thing is certain—all who attended had a wonderful time and are ready for our next 16B get-together.

Unit 16C’s St. Patrick’s Day celebration had a few extra surprises. Hosted by Denise Carlton, Barry Feinberg, and fur baby Skipper, the party started out with everyone picking out fun party accoutrements supplied by Toni Graves. The bling included blinking necklaces, bracelets, and headbands. After everyone was decked out, we surprised Denise and Barry with a champagne toast to celebrate their second anniversary. They actually met over coffee on March 17. Barry couldn’t figure out why everyone brought champagne when he had a case of Guinness beer on ice for the celebration. We just told him to go with the flow!

Denise had prepared corn beef sliders for everyone along with Irish sides. Everyone else brought appetizers, salads, and enough chocolate desserts to keep everyone up all night from the caffeine. The Irish Cream brownies went first. Skipper enjoyed any scraps that fell his way and was anybody’s BFF if they had food to share. Denise shared later that he was asleep in their bed before they had brushed their teeth. After dinner, Glenna Matthews gifted 2022 calendars with Jim Hoagland’s monthly bird photos. She also had small Ukrainian flags for everyone to put in their front yards to show our solidarity with the people of Ukraine.