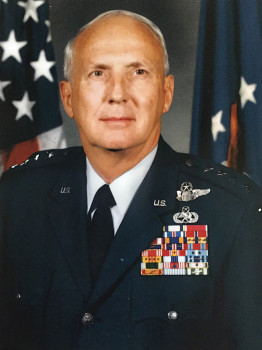 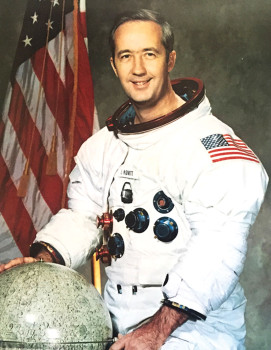 Former astronaut James A. McDivitt and four-star General Earl T. O’Loughlin are special guests at the SaddleBrooke Troop Support (STS) luncheon on Wednesday, February 4, 2015, at SaddleBrooke One clubhouse. Don’t miss this opportunity to listen in to the conversation between these two American heroes as they discuss their phenomenal Air Force and NASA careers and decades of service to our country. Following their conversation there will be an opportunity for Q&A with attendees.

James A. McDivitt, Brig. General, USAF Ret. and former NASA astronaut, joined the Air Force in 1951. He flew 145 combat missions during the Korean conflict in F-80s and F-86s and has logged over 5,000 flying hours. He was selected as an astronaut in 1962 and was command pilot for Gemini 4, a 66-orbit four-day mission in 1965. He was commander of Apollo 9, a 10-day earth orbital flight in 1969 and became manager of the Lunar Landing Operations and then manager of the Apollo Spacecraft Program the same year. He was program manager for Apollo 12, 13, 14, 15 and 16. Following his retirement from the USAF and NASA in 1972, he held executive positions with a number of corporations.

Earl T. O’Loughlin, a SaddleBrooke neighbor, joined the Air Force as an enlisted man and retired as a four-star general, the highest rank in the Air Force with the exception of the only five-star general, Hap Arnold. Early in his career he flew 29 combat missions over North Korea. He went on to serve in Vietnam where he logged 7,000 hours at the controls of 22 different types of aircraft. During his service he managed a budget exceeding five billion dollars a year and a workforce of 128,000 men and women.

A Color Guard of active Marines will present and retire the American Flag.

Tickets for the luncheon program are $30 per person of which $10 is a tax-deductible donation. Doors to The Vistas at SaddleBrooke One clubhouse will open at 11:30 a.m. with plated lunch service at noon. The program will end at 2:00 p.m. To reserve your place and purchase tickets, go to www.saddlebrooke-troop-support.com/luncheon/ or send a check payable to “SaddleBrooke Troop Support” to Joe Rink, 38967 S Serenity Lane, Tucson AZ 85739. For questions, please contact Joe at 825-2211.

For information about SaddleBrooke Troop Support, a 401(c)(3) organization, go to www.saddlebrooke-troop-support.com.