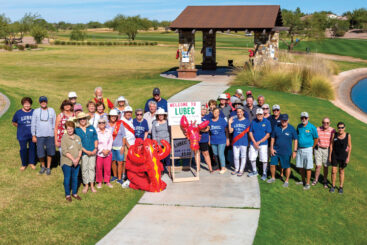 The Unit 8A tour group poses at the Welcome to Lubec sign upon arrival at the Town of Lubec on Sunday, Oct. 24. (Photo by Steve Weiss) 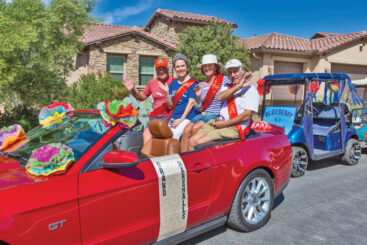 Left to right: Grand Marshalls John and Marci Whitehead and Ernie Nedder, along with Blueberry Queen Maia Schenkel, get ready to lead Unit 8A residents the final miles into Lubec, Maine. (Photo by Steve Weiss) 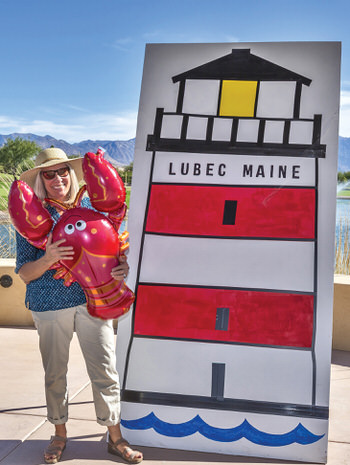 Barbara Heft poses at the recreated West Quoddy Lighthouse at the Unit 8A “Seas the Day” event. (Photo by Steve Weiss) 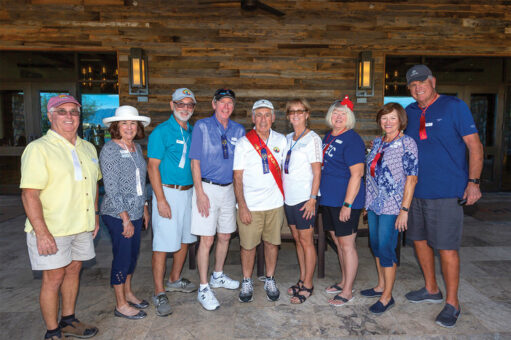 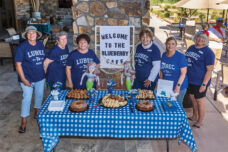 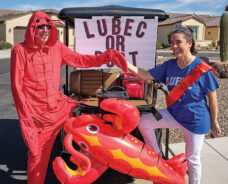 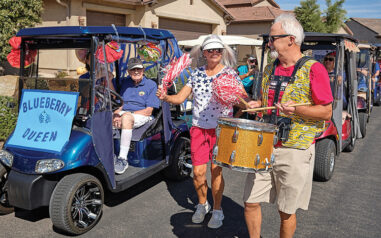 Shelley Ziegler and George Patterson provide cheering and marching music for the Unit 8A parade of final miles into Lubec, Maine, on Sunday, Oct. 24. Len Schenkel, spouse and escort for Blueberry Queen Maia Schenkel, looks on. (Photo by Bob Authur) 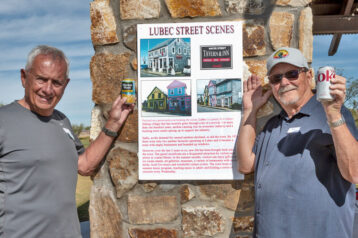 Sam Calbone and Bob Townsend checkout the Lubec Street Scenes display during their tour of the Town of Lubec. (Photo by Steve Weiss) 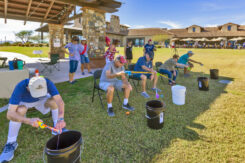 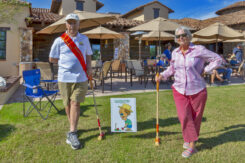 Ernie Nedder and Diane Fox get ready to compete in the croquet contest during the Unit 8A afternoon in Lubec, Maine. (Photo by Steve Weiss) 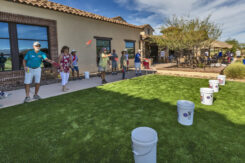 Left to right: Marvin Soskil, Vicki Froistad, Jerry Fox, Sherry Weiss, and Len Schenkel throw lobsters into pots as they compete in the Lobster Toss during the Unit 8A visit to Lubec, Maine. (Photo by Steve Weiss) 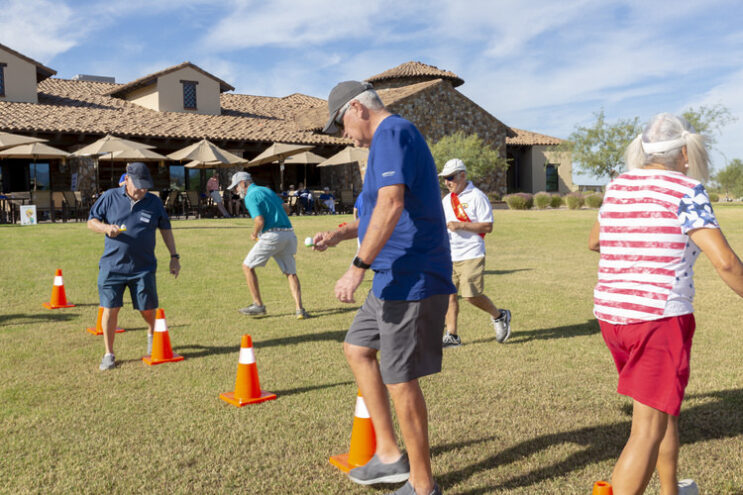 During the 2020 COVID pause, Unit 8Ars decided to relieve a little stress by using their combined exercise miles on a 15-day journey across the country. The final destination was unknown, but residents were incentivized with the promise of a party, themed after the city/state where their total miles would eventually take them.

Unit residents started tracking their daily walking, biking, and jogging miles on March 17. By the end of the trek, 56 Unit 8Ars had walked and biked a total of 2,971 miles, ending up in Lubec, Maine, the Easternmost town in the contiguous U.S., just at the Canadian border.

On Oct. 24, 2021, 18 months after “arriving” in Lubec, unit residents finally celebrated with “Seas the Day”—A Whimsical Afternoon by the Sea in Lubec, Maine.

As they arrived at the Lubec Visitor Center at the Ranch House, residents were greeted by Lubec town officials (committee members Kathy Nedder, Denise Doepke, Judie Townsend, Kate Thomsen, Betty Ryan, and Janelle Authur) and posed for a group picture at the “Welcome to Lubec” sign. They signed up for an afternoon tour of the town and strolled the streets of Lubec. Landmarks were illustrated through pictures and descriptions, including McCurdy’s Herring Smokehouse, Campobello—the summer home of President Franklin Delano Roosevelt, the Lost Fishermen’s Memorial, the West Quoddy Lighthouse, and Lubec Street Scenes. Tourists also posed for pictures at a giant recreation of the West Quoddy Lighthouse.

The 39 tourists then tested their skills and patience at four Lubec-related games: a lobster toss, fishing, croquet, and a Bay of Fundy relay marathon. After lively competition and tie breakers, the winners were awarded first, second, and third place ribbons.

The tour ended with dessert at the Blueberry Café by the Sea. All the desserts—scones, cake, muffins, and turnovers—were made with blueberries, a tribute to Maine’s state fruit and the role it plays in Lubec life.

As they departed for the day, the tourists passed a “Thank You for Visiting Lubec” sign, a gracious ending to a whimsical afternoon by the sea.

Epilogue: After a day of rest, on April 2, 2021, 60 Unit 8Ars began their trek back to the Ranch, traveling 3,109 miles in 14 days. Round trip, Grand Marshalls Marci and John Whitehead walked and biked more than 650 miles, and Grand Marshall Ernie Nedder walked more than 300 miles.