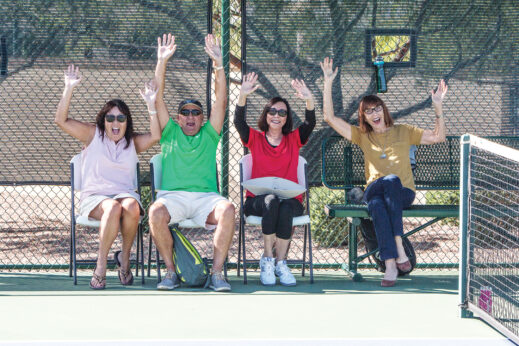 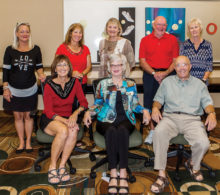 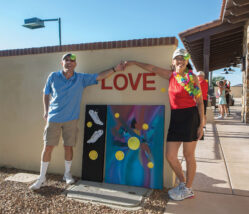 The group; photo by Steve Weiss

On a beautiful fall weekend in early November the SaddleBrooke Ranch Tennis Association (SBRTA) held its annual Steiness Tennis Festival. With thunderstorms in the days preceding the festival, organizers were naturally a bit nervous. Thank goodness the courts remained dry throughout the two days of games.

The festival is named after Helge Steiness, the club’s founder and first president, who passed away three years ago. His wife Krista has moved closer to family but still attends the festival every year.

Participation in the SBRTA is increasing every year, and this year 36 members played. Names were drawn to create two teams: “The Servivors” and “The Aces.” Corine Sturdivant was the captain of the Servivors (sporting red shirts) and Alastair Stone was the captain of the Aces (in blue). The captains did a great job organizing the matches so that most players had four matches. The challenge for them was making sure that spouses didn’t have to play against each other or with each other. I wonder why – not!

At the end of the games the Servivors had done more than “survive,” they won with 38 points to 26 for the Aces.

On Saturday evening a dinner party was held in the La Hacienda Club. Janice Neal, our club president, awarded each Servivor a $10 gift card for use in the Bistro along with a chocolate mini tennis racquet. By raffle three lucky people won half-hour tennis lessons with TJ Duffy. One person won a gift basket with great wine and chocolates, which was donated by Krista Steiness. Janice Neal was presented with a beautiful bouquet of flowers to show our appreciation for everything she has done for the club this past year.

Right after dinner Alastair Stone provided entertainment in the way of a tennis trivia contest. Only two tables managed to get six points out of a possible 10.

This year Susan Swanson and Jackie Levitt took charge of decorations for the festival. Susan enlisted her husband Vern to help build art for the patio area. Susan and Jackie also put their artistic skills to use in creating fun tennis-related centerpieces.

Much planning goes into a successful event. The following people were responsible for putting on this great festival: Sheila Bray, Event Coordinator; Carol Mihal, Registration; Linda Bowman, Treasurer; Dean Alfrey, Facilities Coordinator; Sandy Schlager, Publicity and Greeter; and of course the team captains Alastair and Corine. Sheila recruited her husband John Bray to be the announcer for the games. He is not a tennis player but has such a perfect voice for the job. Steve Weiss was back this year with his camera to capture everyone in action.

Everyone is breathing a sigh of relief that we didn’t have any serious injuries this year. The festival takes a lot of work, but I think everyone is already starting to look forward to doing it again next year.

If you are a Ranch resident and interested in getting into the game, the club offers free mentoring on Monday mornings. To learn more about our club go to www.saddlebrookeranch.org/tennis.