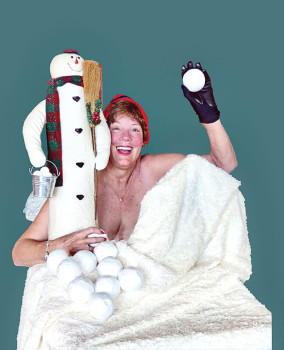 Calendar Girls, “They dropped everything for a good cause!” will be presented April 5-10. The doors/cash bar open at 6:30 p.m. and the show starts at 7:00 p.m at the MVCC Cabaret Theatre. Tickets are $24 including dessert, coffee or tea. Tickets can be purchased by calling 825-2818, at the website: Saddlebrooketwo.com or the HOA office. The best tables sell quickly. Buy a table and come with your friends.

Full of poignant moments, Calendar Girls is a true story about friendship, determination and hope. It’s about loss in many forms, the importance of acceptance and knowing when to let go. But it also offers plenty of humor as six Yorkshire UK friends decide to pose “nude” for a calendar to raise money in honor of their friend.

What attracted media attention and spread their fame world wide was the fact that these women of a certain age dared to be different. The story has been fictionalized from the true story but only altered in small details as the spirit of these amazing women shines through. Based on the blockbuster film starring Helen Mirren and Penelope Wilton, Calendar Girls as a stage play only recently became available in the States after years of performances around the world. It opened in the UK in 2009 and has since become the fastest selling play in British theatre history.

“A very British story with a very British heart, Calendar Girls is based on an uplifting and very inspiring true story that is quirky, poignant and hilarious”

Produced by special arrangement with Samuel French Publishing and based on the Miramax motion picture by Juliette Towhidi and Tim Firth.