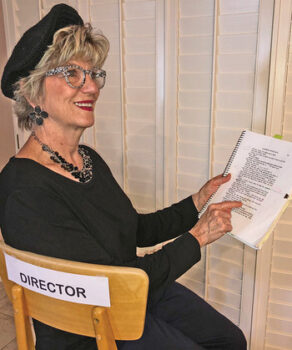 Our live dinner theatre troupe Community Circle Players (CCP) will soon be delivering a charming production in a new format—a series of eight, short, stand-alone plays interspersed with a delightful meal. What a post-Halloween treat! These one-act plays, not merely skits or vignettes, are tender, hilarious, and thought-provoking.

The eight fantastic shows ranging in length from four to 10 minutes are:

* INTERMISSION: Allan Miller’s dramedy with a couple deciding to leave a play or each other.

While the performance format for An Evening of One Acts may be new, patrons can, as always, count on a lovely dinner with salad, entrée, dessert, and no-host bar, along with the wonderful entertainment you’ve come to expect from CCP. The $49 tickets include dinner plus performance and go on sale beginning Oct. 5 at the SaddleBrooke TWO Administration Building or online.

Performances will all be held this fall on the newly renovated stage in the MountainView Ballroom. Seating will be at tables of six in half-moon style so that everyone will have a terrific view of the stage. Tickets can be purchased by individuals or for an entire table if friends and neighbors want to enjoy the show together.

Auditions were held mid-September, and the casts are now busy rehearsing under the guidance of five directors—David Fuller, Carol Merlini, Susan Sterling, Connie Ward, and Tim Morsani, the coordinating director. These CCP directors have acted on stage and worked off stage to help produce previous CCP productions to the delight of SaddleBrooke audiences. CCP co-founder Shawne Cryderman serves as producer of this year’s unique production.

Connie Ward, a veteran CCP actress who also has extensive experience procuring props and sets, is the director of both 1-555-HELP-ART and Conversation 2001. She had the role of the wacky next-door neighbor in CCP’s 2020 fall comedy Cooking with Gus and the trapped tourist Mrs. Hollander in Don’t Drink the Water! in March 2019. Having also played murderess Pinky Zinfandel in Eat, Drink, and Be Deadly! and songstress Tipsy Brewhider in Mafioso Murders, she found CCP’s comedies and murder mystery dinner theatre productions had audiences entertained and involved. Connie says this year’s format of one-acts “is unique, exciting, and new to SaddleBrooke audiences.” She’s thrilled to be directing for the first time.

Mark your calendars and get your tickets. This is a production you won’t want to miss!

Tickets: Tickets go on sale Oct. 5, starting at 8 a.m. in the SaddleBrooke TWO Admin office or online with a credit card.