Colorado Club members have a ball at bocce. 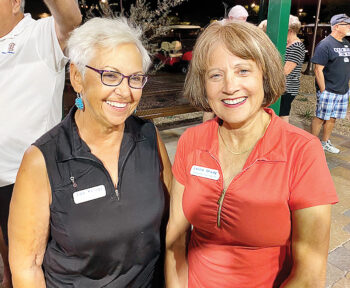 Under the evening stars, members of the Colorado Club gathered at the new Bocce Ball lanes for a great time of bocce. We had 40 players, which meant there were five pairs per lane, but we managed things so that all five pairs played against each of the other four pairs.

With a mix of expertise, leaders were assigned to each lane to help neophyte players as teachers, to be measurers, or to settle disputes as they knew the rules. Thank you to Teresa and Larry Burchfield (our SBR Bocce Club president), Vicki and Kurt Warning, Melanie and Doug Sedam, and Nini and Bob Frank!

When all five pairs had played each other on each lane, the winners of Lane 1 were Edie Kellogg and Leslie Grady, Lane 2 were Vicki and Kurt Warning, Lane 3 were Teri and Richard Beach, and Lane 4 were Deb and Rich Pennington.

In the last 20 minutes of the evening, we had two playoffs between the champions of each lane. The final matchups for the championship were the pair of Deb and Rich Pennington against Edie Kellogg and Leslie Grady. It was an extremely exciting match. Pennington’s score of 1 point won the first direction, but on the return, Edie and Leslie secured 3 points to be the overall winners. Each winner will receive a $20 Ranch House Grill gift card.

The club must thank our event leader, Alastair Stone, for keeping everyone organized but still having lots of fun. Well done, Alastair.

More events are in the planning stages. If you are interested in joining the Colorado Club, please send an email to Linda Shannon-Hills at [email protected]