Community Circle Players (CCP) quickly sold out its fall dinner theatre production An Evening of One Acts. Over the six November nights, 724 attended the show in the MountainView Ballroom. Eight one-act plays—some funny, some thought-provoking—made up this unique production which had one producer, five directors, 21 in the cast, one stage manager, and a tech crew of six. For almost half of the performers, this was their first CCP production.

Audiences had a peek at speed dating, intermission conversations, and rocking chair reminiscences hampered by aging brains. Who can forget mummies hating cats and seeking facelifts, plus Socrates’ desperation call? There were memorable couples on stage arguing about their son’s birthday, about their dog, and over a laundry mishap. As well as requiring many costume changes for some cast members while audience members dined on a delicious meal, the show provoked tears and laughter.

* Oh! Those Antiquities was visually stunning and humorous.

* Love Sonnet was a little sad.

* 1-555-HELPART was philosophical and frustrating.

* Faro was pet centric and playful.

* Intermission was contemplative and poignant.

* Stain was outrageous and in your face.

* I’m Herbert was hilarious, if a little close to home.

Each play elicited a different response, and each audience responded differently, sometimes unexpectedly.”

The troupe’s next production will be March 14 through 23, 2022. Save the dates! CCP is already working on bringing another fabulous dinner theatre show to the SaddleBrooke community.

Auditions for the yet to be announced CCP spring production will be held Monday, Jan. 10, and Tuesday, Jan. 11, from 10 a.m. to 1 p.m. in MountainView Ballroom West. Please plan to come both days. Those cast in the show will be expected to attend a complete read-through on Thursday, Jan. 13, from 10 a.m. to 1 p.m. This is a great opportunity for both novice performers and seasoned ones to use their talents, be involved, and have fun. 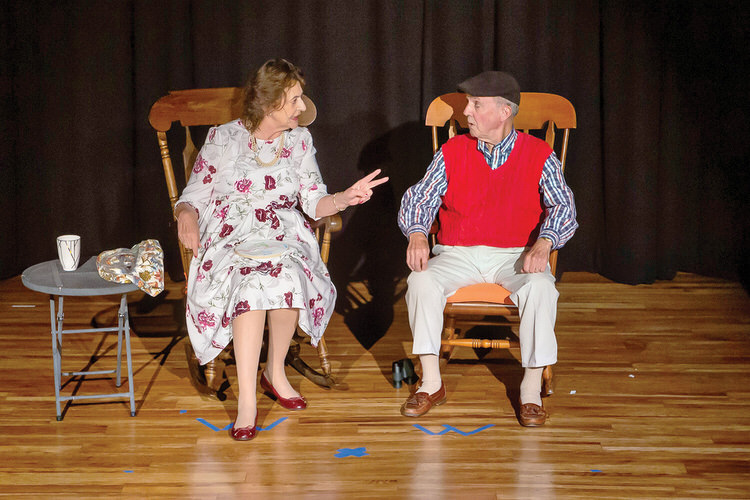 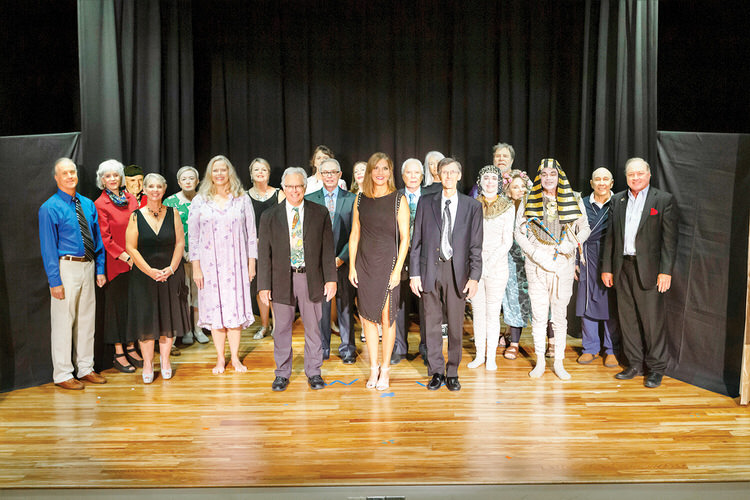 The cast of CCP’s An Evening of One Acts.

Community Circle Players has announced that The Curious Savage will be CCP’s spring dinner theatre production. Since its opening on Broadway, this warm comedy has been enjoyed around the country. It delightfully compares the loyalty and caring of psychiatric patients with the greed and hostility of so-called “normal people,” and as the comedy’s playwright John Patrick describes, The Curious Savage leaves the audience “with a feeling that the neglected virtues of kindness and affection have not been entirely lost.”

CCP director Susan Sterling and producer Tim Morsani are eagerly looking for SaddleBrooke and SaddleBrooke Ranch residents to audition for the six female and five male roles. Want to participate offstage with lights, sound, sets, props, and costumes? Please also come to the Jan. 10 and 11 auditions. This is a great opportunity for both novice performers and seasoned ones to use their talents, be involved, and have fun.

Rehearsals will be Mondays, Tuesdays, and Thursdays from mid-January to mid-March, and a few accommodations can be made for schedule conflicts, if needed.

Performance dates are Monday through Sunday, March 14 through March 20 (excluding the 17th) on the MountainView Ballroom Stage. Also, there will be performances March 22 and 23 on stage at SaddleBrooke Ranch. Mark your calendars. See you at auditions!