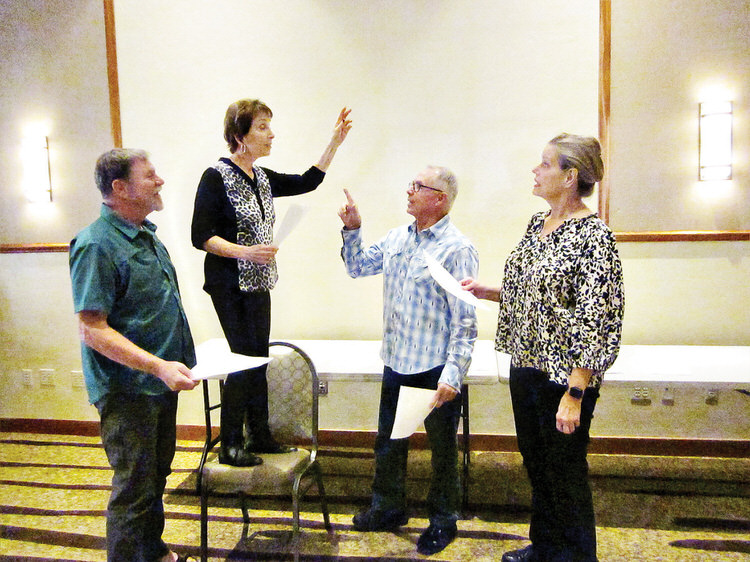 Jim, Fran, Al, and Carol auditioning for The Curious Savage

Bet you’re curious about Community Circle Players’ (CCP) production of the warm comedy The Curious Savage coming to SBR this March. In 2007, the production by SaddleBrooke PrimeTime Players was a big hit under the direction of Susan Shear. No doubt CCP’s revival will be as well.

Since its opening on Broadway, audiences across the country have enjoyed the story of an elderly widow (Mrs. Ethel P. Savage) whose husband left her millions and whose stepchildren strongly object to her plans to give away the entire fortune. To hold on to their family wealth and legacy, they have her committed to a sanatorium called the Cloisters, where the comedy takes place.

Playwright John Patrick delightfully compares the loyalty of gentle psychiatric patients with the greed and hostility of the so-called “normal” Savage stepchildren and leaves the audience feeling that the oft neglected virtues of kindness and affection have not completely vanished.

CCP director Susan Sterling and producer Tim Morsani had a lot of talent to choose from for the cast. Both SaddleBrooke Ranch and SaddleBrooke residents auditioned for the seven female and four male roles and are already in rehearsals. Crafty and kindhearted widow Ethel Savage will be played by CCP veteran actress Connie Ward. The cast members filling the roles of the other Savage family members are Jim Burke, Monica Gustafson, and Al Weigel. The staff and Cloisters’ residents (including a compulsive liar, former military pilot, statistician, and seascape painter who has never seen the ocean) will be portrayed by Mark Albrecht, Fran Berman, Marilyn Gunther, Patti Bregory-Burke, Carol Henry, Karen Moore, and Jay Schweitzer.

Performance dates on Tuesday and Wednesday, March 22 and 23, on the SBR stage.

Tickets for these performances go on sale online Feb. 21 and must be purchased with a member account. Log in to your member account at www.saddlebrookeranchhoa.org. Go to the recreation & events tab and click on the event.

The Curious Savage is worth more than your curiosity. See you there!