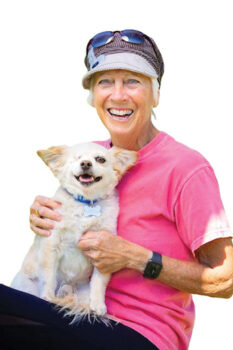 In early February, a SaddleBrooke Ranch pet sitter, Donna Hoshide, messaged Deb Street saying that her little one-eyed rescue dog, Pirate, would make a great contestant in the Cover Dog contest that was sponsored by Tucson Lifestyle magazine to benefit the Humane Society of Southern Arizona. It ran from Feb. 1 through 13. Deb, of course, agreed and entered him, and then sent his entry photo on the website to friends. Donna also posted it on Nextdoor.

Deb immediately started receiving emails giving her details of who had donated in Pirate’s name. She watched the website daily, and Pirate worked his way up into the top 10. Being in the top 10 meant that those dogs had a chance of being the Cover Dog for 2022 on the cover of Tucson Lifestyle magazine. Five minutes before the closing time of 10 p.m. on Feb. 13, Deborah checked the website and Pirate was number 14. Deb was very happy and thought that was pretty good, considering there were 330 dogs in this contest. The next morning, Deb got a message from Donna saying that Pirate ended up number 8. Wow! Deb wondered how that happened, because there was quite a gap between number 10 and number 14.

On March 4, Deb got an email from a Tucson Lifestyle magazine editor saying that because Pirate was a finalist, they would like them to come to the Mariposa resort in Tucson so they could take some photos. Well, this little dog, who was fearful of most people when Deb first got him, performed like never before with the two guys involved in the photo shoot. It’s like somehow he knew this was a special thing. The two guys were obviously dog lovers, and Pirate picked up on that as well.

It wasn’t until the end of April that Deb got a text message from Cindy Pylkka with the article in the Tucson Lifestyle magazine showing that Pirate was runner-up. What a lovely surprise! The contest raised $59,352 for the Humane Society of Southern Arizona—way above the goal they hoped to reach.

Deb wants to thank everyone who passed the word on and contributed to this wonderful cause—what a fun way to get people involved to help animals in need.