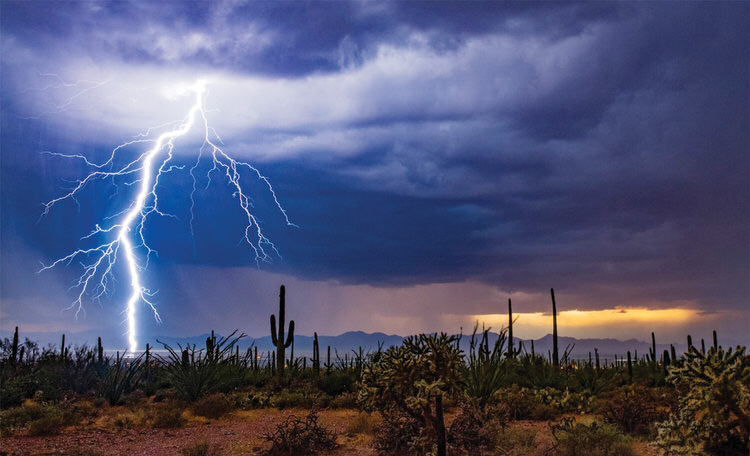 Prior to moving to the Ranch, we were accustomed to the four seasons that divide up the year, based on the weather and daylight hours. We quickly learned of the fifth season of the Sonoran Desert.

Summer is divided into two parts, “fore-summer,” occurring in May and June, followed by “summer monsoon season” from July to mid-September. The fore-summer brings us very hot temperatures, and with climate change, our temperatures have been more intense each year. The monsoon summer, in a good year, brings summer rains and the revitalization of the desert vegetation. The Sonoran Desert, covering a large part of the southwestern U.S. and Northern Mexico, is one of the wettest deserts in North America.

There are three essential elements for a good monsoon—having strong weather activity in southern and central Mexico, the Gulf of California heating up, and the wind reversing directions. These critical factors cause the monsoon thunderstorms to build up in the south and make their way up north.

The term “monsoon” is a slight misnomer. It comes from Arabic roots, meaning “reversal of wind” referring to a seasonal shift in winds, bringing wet and dry periods to our region.

Forecasts call for a particularly wet monsoon season this summer, with more rain in July while tapering off in late August into September. Although we love the cooling of the temperatures, the humidity rises, making it a bit more uncomfortable, even with the cooler temperatures.

Be aware of a few things as the rains come. Those dry creeks and arroyos begin to fill, causing some flooding and lower areas of the road becoming dangerous to cross. If you see signs that say, “Do Not Cross When Flooded” don’t drive there or you will be fined if a rescue occurs. Oils build up on roads causing hydroplaning, which is very dangerous during rainstorms. Additionally, the Arizona Emergency Information Network says flooding can cause power outages, traffic issues, damage to buildings, and landslides.

At least five people died during Arizona’s monsoon season in 2021 due to flash floods: two in Gila Bend, one in Grand Canyon National Park, one in Cottonwood, and another in Pima County. Flooding in 2021 also left thousands of people without power throughout the season.

When the rains start, Sonoran Desert toads—also known as Colorado River toads or the Bufo toad (Bufo alvarius)—will begin to emerge from the ground and hop their way into desert washes, ponds, and lakes, as well as your pool. Keep your pets away from the toads, as the skin is so poisonous it can kill full-grown dogs within hours of contact of the toxins on their skin. In addition to the parotid glands that produce deadly bufotenin, the glands on their skin release equally toxic chemicals that have psychedelic properties. The male toad makes a quick and barely audible low-pitched trill during mating season.

For more information about weather in our area, visit the National Weather Service website at www.weather.gov/twc. Enjoy the rains!