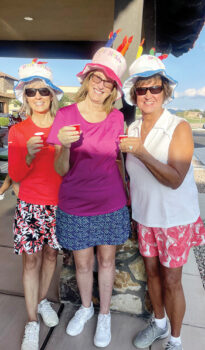 In the late afternoon each Tuesday, you will see the pickleball courts packed with women pickleball players who call themselves the Dinking Divas. The group was started when Sherry Brinster and Debora Witten wanted to play pickleball with just women of liked ratings. A small group of eight grew to more than 25 members within a month as word got around that only women were playing. The music is loud and the laughing is constant. But it is the game of pickleball that brings the ladies back each week. They have added an after-play birthday celebration the last Tuesday of the month to celebrate anyone who had a birthday in that month. Sherry is always in charge of making the cupcakes. In September, the Divas celebrated the birthdays of Gayle Richey, Teri Anderson, and Kitty Pohler.