Residents of Unit 8A pose for the traditional group photo, memorializing another year of monthly happy hours. (Photo by Steve Weiss) 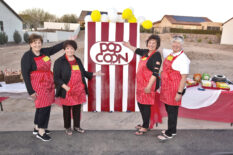 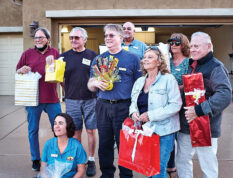 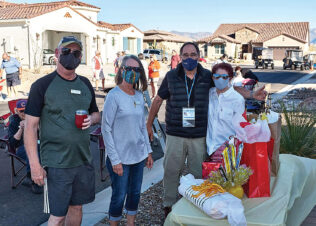 Mark and Lani Warren and Steve and Sherry Weiss check out the raffle prizes at the Unit 8A “Drive-In” Through the Years event. (Photo by Bob Authur) 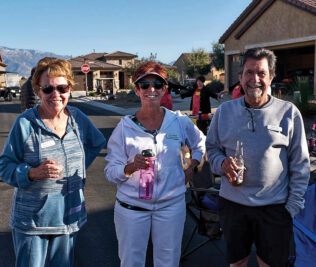 Nancy Tuel, CJ Utecht, and Floyd Tuel enjoy an evening at the drive-in during Unit 8A’s “Drive-In” Through the Years event on March 19. 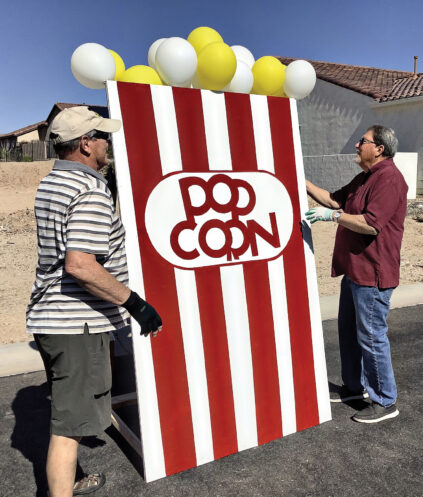 Stan Doepke and Bob Townsend set up the concession stand popcorn box as the committee decorated for the Unit 8A event “Drive-In” Through the Years. (Photo by Janelle Authur)

Residents of Unit 8A bid farewell to year five of monthly happy hours and welcomed in year six on March 19, with “Drive-In” Through the Years, a celebration of half a decade of happy hours and a look back at year five.

Sixty-seven Unit 8A residents set up tables and chairs in the socially distanced outdoor theater on South Tamarisk Place. The setting resembled a drive-in theater, complete with a towering six-foot, red and white popcorn box at the concession stand, an admission table, a 120-inch movie screen, and hostesses in red and white striped aprons posing as old-time TV personalities.

Residents were greeted at the admissions table by hostesses Shirley and Lucy (a.k.a. Denise Doepke and Kate Thomsen) and moved into the theater area to enjoy happy hour and shop for Unit 8A logo items at the Spring Logo Boutique. As has become an annual tradition, unit resident and photographer, Steve Weiss, memorialized another year of happy hours with a group photo.

Hostess Laverne (a.k.a. Janelle Authur) welcomed residents with a bit of unit trivia. She noted that 52 homes are occupied and the 53rd (and last) lot has been sold. The unit has 98 residents (pets not included), has had seven re-sales, and welcomed five new households this past year. Residents are from 18 states, with California and Washington leading the count. The unit also enjoys the longest streak of happy hours at SaddleBrooke Ranch and, as far as is known, is the only unit to have its own official logo and time capsule. So far, no unit song.

In March 2020, unit residents recorded the historical COVID pause by contributing their thoughts to a time capsule, to be opened in 2021. Laverne, Shirley, Lucy, and Ethyl (a.k.a. Judie Townsend) opened the time capsule to much fanfare and described and displayed the entries. The thoughts contributed reflected the gambit of emotions, including items such as one sheet of valuable toilet paper, masks, hand sanitizer, a picture of empty shelves, handwashing instructions, prayers, handwritten notes, cartoons, reflective song titles, timely newspaper articles, a magazine, and an unused entry token to the 2020 Tokyo Olympics.

Residents bundled up in the cool evening, enjoyed their “Bring Your Own Dinner,” and watched a slide show featuring Unit 8A residents, events, and gatherings from the past year. The slide show has also become an annual tradition, with this year’s show the third production.

Unit 8A residents Paul and Kate Thomsen wrapped up the evening with surprise Oscar nominations and awards to committee members Denise Doepke, Judie Townsend, Kate Thomsen, and Janelle Authur for producing, directing, and acting in the evening’s event. On to year six!