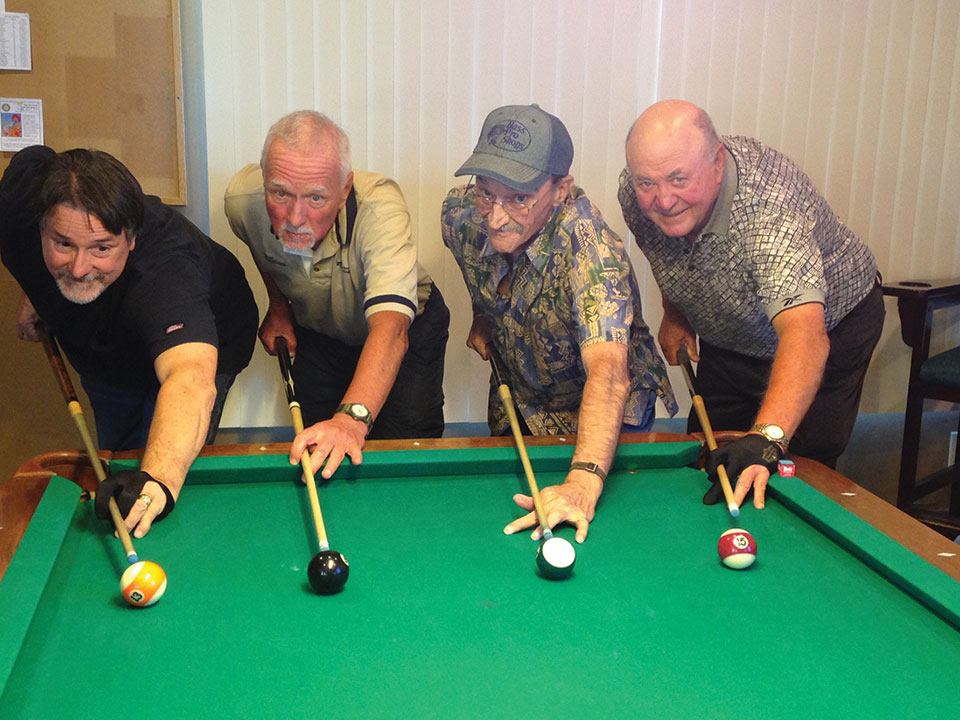 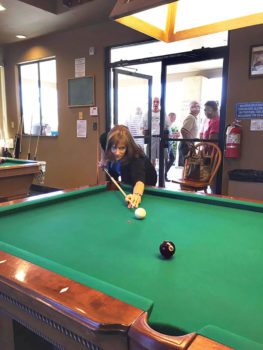 Janette “The Archer” Borland, the first lady to play in a Pool Players of The Brooke’s sanctioned event.

Pool Players of the Brooke would like to thank our generous sponsors La Hacienda Mexican Restaurant and Xpert Automotive in Catalina.

A Pool Players of The Brooke First: Janette “The Archer” Borland, a member of Pool Players of the Brooke and also the SaddleBrooke Sharkettes, is the first women to play in a PPB sanctioned tournament. We applaud you, Janette, for your courage; you held your own in this competition. We hope to see you and other Sharkettes participate in the future.

Fred “The Baker” Dianda and Gary “Bushwhacker” Powers’s road to undefeated victory started by sending Jim “The Artist” Morris and Dominic “The Doctor” Borland to the losers’ bracket after a hard fought 2 to 1 win in a 45-minute marathon 8-Ball match. Their next opponent was Richard “Loose Rack” Galant and Tom “Half Jacket” Barrett; Fred and Gary sent them to the losers’ bracket with ease. Karl “English” Knight and Dan “Oh No!” Stebbins were next up, and their fate was no different than Fred and Gary’s other opponents; they were defeated and sent to the losers’ side. Meanwhile, Tom and Richard were working their way through the losers’ side for the chance to match up again with Fred and Gary who were on the hill waiting for someone. Tom and Richard would have to beat Fred and Gary twice to take the championship, but that didn’t happen. Fred and Gary won the first match for the Championship. Congrats to Fred and Gary!

The day started by 14 participants meeting at the RoadRunner Grille at 11:15 a.m. for an early lunch. The Scotch Doubles tournament started at 1:00 p.m. and lasted three hours with 26 games of 8-Ball being played. The 14 participants consumed too many scrumptious éclairs whipped up by our own Fred “The Baker” and some Cadbury Crème eggs brought by Karl “English.” We competed and met some new friends that shared our passion. That is a good day! Rack ‘em up!