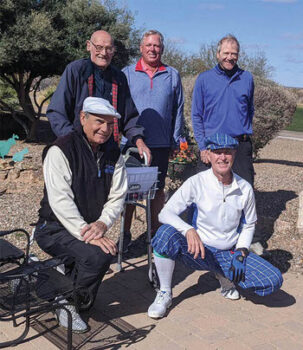 The SaddleBrooke Ranch golfing community is honored to have him as one of our neighbors, Dr. Ed Updegraff, who has had a long and distinguished career as an amateur golfer. Dr. Ed has won many tournaments on the local, state, and national level, including the U.S. Senior Amateur in 1981. He played in the Masters Tournament five times, as well as played in 17 U.S. Amateur tournaments, and was a member of three winning Walker Cup Teams, and captained the 1975 team to victory. He first shot his age when he was 67.

One of Dr. Ed’s greatest achievements however, came in 1999 when he received the United States Golf Association’s (USGA) highest honor, the Bob Jones Award. This award is named for the amateur great and co-founder of the Augusta National Golf Club, Bobby Jones, and is given in recognition of distinguished sportsmanship in the game. The award seeks to recognize a person who emulates Jones’ spirit, his personal qualities and his respect and attitude towards the game and its players. Dr. Ed is in exceptional company as other recipients of this award include Arnold Palmer, Ben Hogan, Bob Hope, Jack Nicklaus, Nancy Lopez, and Annika Sorenstam.

Dr. Ed lives just off the green on the 10th hole and spends part of each day watching golfers go by from inside his home. His three daughters, who also live in SaddleBrooke Ranch, download each day’s tee sheet for him so he can watch his favorite SBR players go by, and he’ll often comment on their game or how they could have played the hole differently. On the warmer days, Dr. Ed will sit outside on his patio to wave to players or say “hello”.

Dr. Ed turned 99 years old on March 1. That week, the ladies of the Women’s Golf League and the men of the Men’s Golf League stopped by Dr. Ed’s patio behind the 10th green on their respective golf league days to present Dr. Ed with a birthday card signed by all their league players. There was a large banner hanging from a nearby tree to encourage golfers to “HONK” to wish Dr. Ed a happy birthday!

Happy Birthday Dr. Ed! We are very fortunate to have such a wonderful person and distinguished golfer as our neighbor.