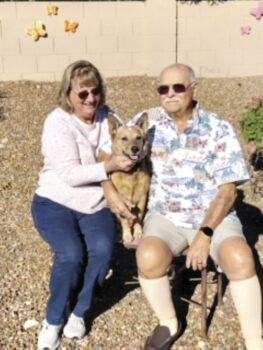 Dharma with Debbie and Warren Montoya 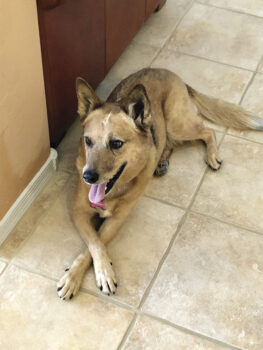 SaddleBrooke Pet Rescue Network is delighted to announce that Dharma, the Australian Cattle Dog in need of a new home has found her perfect home. She has been living with a very caring foster for several years but needed to find a permanent home. Dharma is a bit of a princess and had specific requirements for her new home: she had to be the only pet, requires two walks per day, frequent golf cart rides, and the non-negotiable requirement—she must sleep with her people on the bed. It took a while for the perfect couple to come along but they have.

We would like you to meet Debbie and Warren Montoya of SaddleBrooke. They recently lost their beloved dog, Honey, whom they adopted at 6 weeks of age, and she passed at the age of 16. When they saw Dharma’s picture, they could not believe how much she resembled their dog, Honey. Then as luck would have it, or was it fate, their paths crossed while Dharma was on one of her many walks, it was love at first sight! It didn’t matter to them one bit that she had been deaf since birth, they were smitten. Her adoption was a little bittersweet for the foster, but he knew she was on her way to the perfect SaddleBrooke home. And by the way, she did sleep on the bed with her people the first night and every night since. Such a princess!