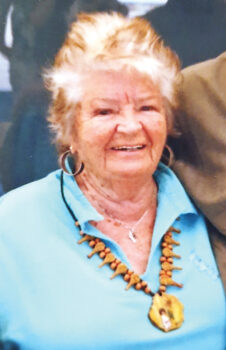 Marie Madeleine Fiorino was born into a French-Canadian family in Edmonton, Alberta, on May 8, 1925. She passed away on Aug. 3, 2021 at the age of 96 in Tucson, Ariz. She lived a musically- and family-oriented life, and was a deeply spiritual woman who put her faith in God’s love and shared it generously.

She is preceded in death by her husband of 71 years, Emilio “Lee” Fiorino, (died May 22, 2021), and her brothers John Turgeon, and Bernard Turgeon. Madeleine is survived by her siblings Pierre Turgeon, and Marie-Claire Turgeon, as well as her five children, Robert, Paul, Michelle, John, and Ted. At the time of her passing, she had 11 grandchildren and five great-grandchildren.

Madeleine’s musical talents and distinctive singing voice was discovered at the young age of 9. She had a weekly radio show that featured her singing in five different languages. She had many fans across Canada, and even received 169 Easter eggs from her fans one year.

At age 12, Madeleine moved by herself to the United States where she was awarded a scholarship to study singing, piano, and languages with the sisters of the Sacred Heart at the Pius X School of Liturgical Music. She also received a scholarship to study at the Juilliard School of Music in New York City. She went on to sing at Radio City Music Hall, with the Philharmonic in Carnegie Hall, and in opera, radio, and TV. She made her debut at age 18 playing the part of Michaela in Carmen at the Metropolitan Museum of Art. She sang alongside budding stars such as Frank Sinatra, Gladys Knight, Dorothy Collins, and her childhood friend, Robert Goulet, to name a few. She performed on Broadway along with Ethel Merman in Annie Get Your Gun and with Shirley Jones in Oklahoma!. She received fan mail from Bing Crosby and later received the Key to the City in Denver.

Madeleine was a master of Gregorian Chant, which she taught in seminaries and other religious institutions, along with choir and piano. She has directed countless choirs since 1956, including the Women’s Choir in Denver and the St. Louis Catholic Church Boy’s Choir that won three first place state awards in the Lowell Thomas Testimonial Event.

She was a teacher of Yoga and was one of the first women in Colorado to teach natural childbirth classes. She was also the first lay minister of the Catholic Church in Parker, Colo., that began with masses in her home in the 1960s.

Madeleine had a great respect and connection to the American Indigenous Tribes, and she was a great advocate for their way of life, spirituality, and legends. She took any chance that she could get to spend time on reservations and getting to know the cultures of the various tribes. She was proud to have been made a member of the Blackfoot Tribe in Canada in a traditional naming ceremony. They gave her the name Asi Potaki, which means Good Flying Woman.

She has written and composed numerous songs and released albums in her extensive singing career. She will be greatly missed.

Madeleine and her husband Lee always considered SaddleBrooke to be a little piece of heaven on earth. They have both expressed their extreme gratitude for all the wonderful people in their community.

In lieu of flowers, donations can be made in her name to the Rocky Mountain Down Syndrome Association at www.rmdsa.org/donate.

A Celebration of Life will be held for Madeleine in both Tucson, Ariz. and in Denver, Colo. Details for each service will be listed on her dedicated website at a later date as her family makes arrangements to honor her life. Visit bit.ly/MMFiorino for more information.