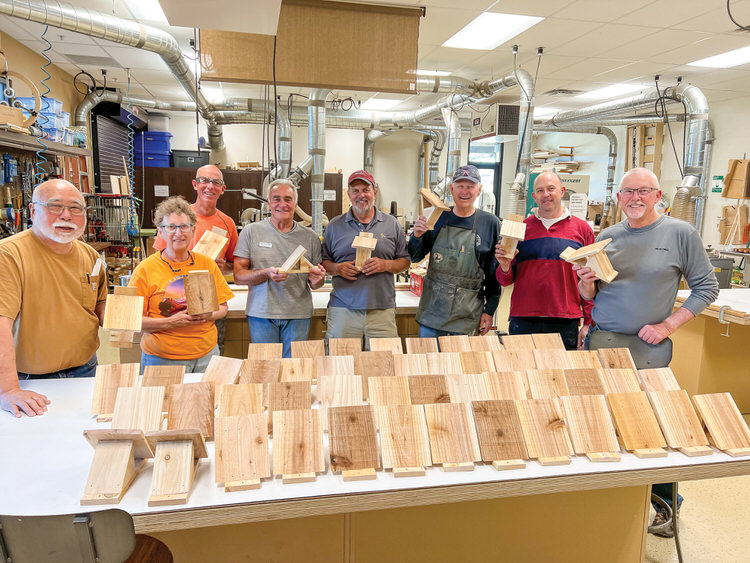 Seven volunteers from the SaddleBrooke Ranch Woodworkers Club joined Jim Hoagland, “the Birdman of SBR,” in building nest boxes for Lucy’s warblers to donate to the Tucson Audubon Society (TAS). This group met on Feb. 15 in the woodworkers room at the SBR Creative Arts and Technology Center. Jim provided the plans from the Tucson Audubon Lucy’s Warbler Project as well as the wood material. The experienced woodworkers assisted the new members, who got a chance to learn a few new techniques of cutting bevels and using jigs. The goal was to make 30 nest boxes, but the volunteers exceeded that goal in making more than 55.

To begin the session, Jim explained the purpose of making the boxes. These boxes will be sold in the Tucson Audubon Society’s nature shop. The money from the sale of the boxes will support TAS’s mission of “Inspiring people to enjoy and protect birds through recreation, education, conservation, and restoration of the environment upon which we all depend.”

Jim went on to explain the breeding range and timing of the Lucy’s warbler and how it is limited mainly to the Southwest from mid-March until departing in the late fall to the Pacific Slope of Mexico, rarely going south of Oaxaca for the winter. Most of the nesting in their habitat range occurs in April and May. He went on to further explain that the small 4” long bird will lay between four to five eggs per clutch and almost always will lay two clutches during the nesting season.

A video was shown of a Lucy’s warbler making a nest in the exact type boxes the club was making, and Jim played the sounds of the male singing, a set of two to three trills varying in pitch and speed. He encouraged everyone to listen for it in the arroyos, along the nature trail, and in their backyards starting in mid-March. He went on to describe the species’ gray plumage that is highlighted with rich cinnamon on the crown and rump.

The Lucy’s warblers nest in tree cavities, one of only two warbler species that do so (the other is the prothonotary warbler of the Southeast). After TAS studied their natural nests located in peeling bark of mature mesquite trees in dense mesquite bosque, the triangle nest box was found to be the best design of the eight experimental boxes used.

Jim continued to explain that Lucy’s warblers have been seen here at the Ranch along the Nature Trail, in the arroyo behind the dog park, and in the trees between the Ranch Grill and the Art Center. He also has recorded them behind his house in the arroyo.

Lucy’s warblers were named in honor of Lucy Hunter Baird, the daughter of ornithologist Spencer Fullerton Baird, the second secretary of the Smithsonian Institution.