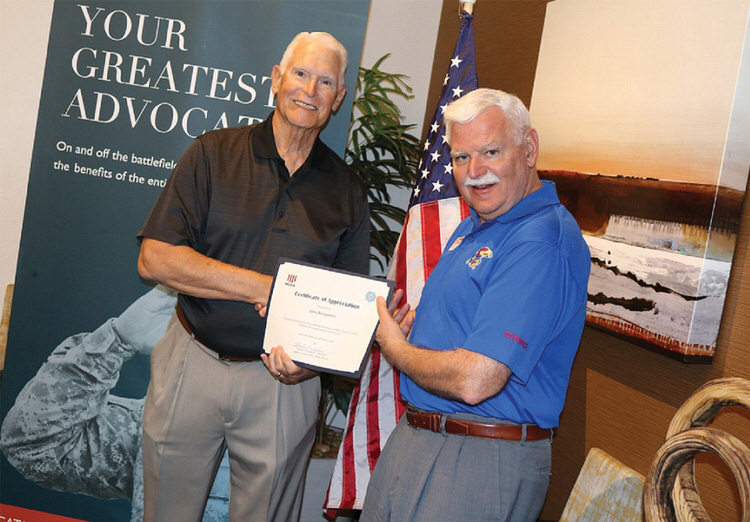 The Catalina Mountain Satellite Chapter (CMSC) of the Military Officers Association of America (MOAA) held its meeting on March 19 at SaddleBrooke Ranch. The meeting began with a business session presided over by Capt. Chuck Vaughan, president, during which members were updated on the chapter’s current activities.

Capt. Vaughan stated plans were being made to ask the membership for permission to change from a satellite chapter of the Tucson Chapter to being its own chapter because of the growth in membership being experienced by the satellite chapter versus that of the parent chapter.

SaddleBrooke resident John Reingruber was the presenter. John had spent his entire 35-year career as a civilian in the Department of Defense. John is also the husband of CMSC member LTC Tracy Reingruber, USAF Retired.

Mr. Reingruber initially discussed his early, pre-Pentagon career, which featured a tour with the Navy Foreign Material Program, where he focused on reverse engineering weapons and weapon systems from other countries. Next, he told the attendees about setting up and running a special field activity for the Office of the Secretary of Defense to develop equipment for Special Forces, the counterinsurgency in Central America, and counterterrorism applications.

Mr. Reingruber recounted his experiences in conducting research and development for “Charlie Wilson’s War” in Afghanistan. Congressman Wilson influenced key elements of the United States government to support the Afghan Mujahideen in its war against the Russian Military. John had many interesting stories about developing “low-tech weapons” for the Afghan Mujahideen, as well developing ways for higher technology weapons to be used in Afghanistan. For example, he talked about developing special mule saddles to carry Stinger missiles through the Afghan mountains.

Potential members interested in joining our organization and attending any meetings can contact Membership Chair LTJG David Bull by email at [email protected] or by telephone at
520-825-0604.

The Military Officer Association of America (MOAA) is a nonprofit veteran’s association dedicated to maintaining a strong national defense and preserving the earned entitlements of members of the uniformed services, their families, and survivors.

The Catalina Mountains Satellite Chapter is part of the Tucson Chapter of MOAA, and encompasses Northwest Tucson including Catalina, Oracle, parts of Oro Valley and Marana, SaddleBrooke, SaddleBrooke Ranch, and Sun City. For additional information, please visit our website at www.tucsonmoaa.org.