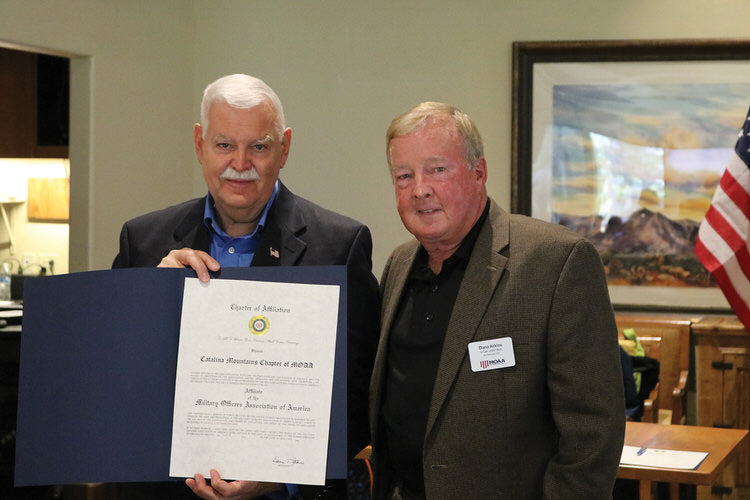 On Nov. 5, 2022, Catalina Mountains Chapter received its formal charter as the newest chapter of the Military Officers Association of America (MOAA). For the last eight years, the organization has been a satellite of the Tucson Chapter MOAA.

All three presidents of the Catalina Mountains Satellite Chapter were also present. Retired Col. Rett Benedict, U.S. Air Force, was elected the satellite chapter’s first president in 2015 and served until 2018. In 2019, retired Col. William J. Nagy, U.S. Army, was elected president and served through December 2021. In the beginning of 2022, retired Capt. Charles F. Vaughan, U.S. Navy, took over the reins of the satellite chapter. Capt. Vaughan then became the president of the new chapter on July 14 when the national MOAA Board of Directors approved the organization’s application to become the tenth MOAA chapter in Arizona.

The December luncheon meeting of the Catalina Mountains Chapter was held at SaddleBrooke Ranch Grill on Dec. 17. The speaker was retired Maj. Raymond Caryl, U.S. Army. He talked about his experience flying with the 220th Reconnaissance Airplane Company, the “Catkillers,” in support of U.S. Marine Corps operations in the Republic of Viet Nam. Maj. Caryl is also the author of the book An Army Pilot Flying for the Marines in the Vietnam War, published in 2019.

If you are a former or present officer of the uniformed services interested in joining our organization, please contact Membership Chair former Lt. j.g. David Bull, U.S. Navy, by email at [email protected] or by telephone at 520-825-0604.

The Military Officers Association of America is a nonprofit veteran’s organization dedicated to maintaining a strong national defense and preserving the earned entitlements of members of the uniformed services and their families.