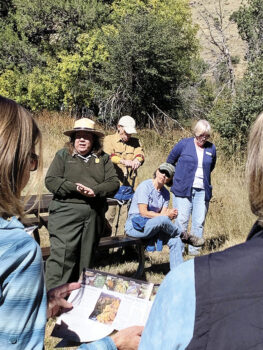 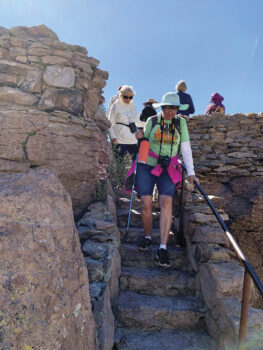 Chiricahua National Monument (NM) was the latest destination of the SBR National Park Club. Over 30 members of the club had a day of learning, exploration, and hiking in the park site located in Southeast Arizona.

Ranger Moody explained Chiricahua NM is a small part of the Chiricahua Mountains. The national monument is known for amazing rock pinnacles and balancing rock formations that are the result of erosion of volcanic rock spewed over the area 27 million years ago. Ranger Moody was asked if the pinnacles could fall. She stated that the pinnacles have been studied and found to be 40 times stronger than buildings in Los Angeles that are built along the San Andreas Fault.

The word “Chiricahua” is thought to come from an Opata Indian word describing the wild turkeys that once roamed the area. Although over-hunted to the point of extinction in the 1800-1900s, the Gould wild turkey was successfully re-introduced to the area in 2006 and are seen and heard today.

Besides the Chiricahua NM being part of a sky island habitat to a variety of wildlife, and plant life, it is also a crossroads for four ecosystems: the Rocky Mountains., the Sierra Madre Mountains., the Sonoran Desert, and the Chihuahuan Desert. Wildlife includes black bears, ringtails, mountain lions, four species of the North American skunk, tarantulas, lizards, rattlesnakes, and more. In addition to the prickly pear and yuccas, there are Arizona sycamore and walnut trees that turn yellow in the fall, as well as varieties of oak and maple trees that turn color in the spring as the old leaves drop. The area even gets snow. There is something for anyone who enjoys these ecosystems.

Starting in the 1400 and 1500s, Native Americans who became known as the Chiricahua Apache began to live in the area. It was interesting to learn that Cochise and Geronimo were from this Chiricahua Apache tribe. More information about the early Native tribes can be found at the Amerind Museum in Dragoon, Ariz.

Other interesting facts from Ranger Moody were:

* In 2021, Chiricahua NM was certified an International Dark Sky Park.

* Chiricahua NM is designated a Class I area, which is the highest air-quality protection designation under the Clean Air Act.

* In April 2022, the U.S. Senate passed a bill to make Chiricahua NM a national park. The bill needs to pass U.S. House approval.

A huge thanks goes to Vickie Atkinson and Rob Lonjers and other volunteers for making this a wonderful experience.

If you are interested in visiting Chiricahua NM, it is located 120 miles southeast of Tucson; take I-10, turn off at the Willcox exit, then follow the signs. For more information about the park, go to nps.gov. For books and maps about the monument, visit the Western National Parks Association in Oro Valley. For more information about the SBR National Park Club, visit GroupWorks or send an email to [email protected]