First Unit 6 Gathering of the Witches 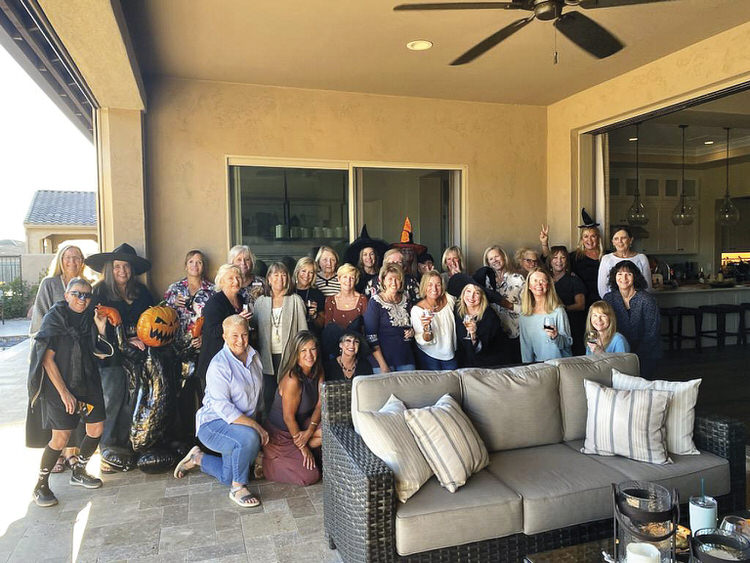 Witches of Unit 6 gather for the spooky season

The ladies of Unit 6 parked their broomsticks to ring in the haunted season for the gathering of the witches on Oct. 28 hosted by Irene Harvey, Denise Smith, and Linda Chase. The “no warlocks” allowed event was the first ever in Unit 6 where just the ladies got to get together to learn about each other, enjoy great conversations, and feast on spooky dishes and sip on wine. The “coven” was such a success, with 31 witches in attendance that the Unit 6 ladies have decided to make it an annual event!

Unit 6 Ladies Start Off Halloween with a Dance Fitness Class 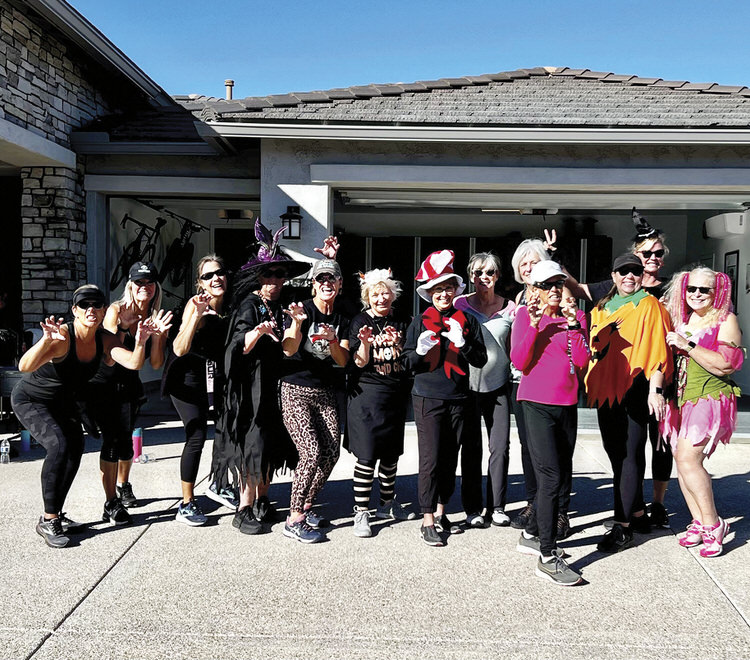 Our Unit 6 ladies showed up bright and early on Halloween morning to start celebrating. We stretched and danced to Halloween inspired music and even learned the “Thriller” line dance. Thanks to dance fitness instructor Katie Lundgren, all levels of skill were able to participate. There was much laughter and fun, not to mention a good workout! Afterward the ladies enjoyed a breakfast buffet, and prizes were given out for the best costumes.

Unit 6ers Are at it Again!

Participants in the Unit 8A happy hour and scavenger hunt

Residents of Unit 8A gathered on Oct. 22 for their 80th Happy Hour while participating in a scavenger hunt and “Let’s Make a Dea”’ extravaganza! The event was hosted by Lani Warren and Sheila Davidson. Teams of four were sent out to search for a list of items in front yards in unit 8A and streets nearby. The teams were also encouraged to seek out bonus points by finding the hidden Unit 8A rock. Once they returned to the Hacienda Club, teams then had to see how many items they had in their bags of goodies that matched the “Let’s Make a Deal” list. The winning team to take the distinguished 8A scavenger hunt trophy included Janelle and Bob Authur along with Judie and Bob Townsend. A great time was had by all!

On Oct. 22, 12 Unit 8A neighbors dressed in bright yellow vests and cleaned up Highway 77 from mile post 91 to 92. Seventeen large blue trash bags were collected and left roadside for the Arizona Department of Transportation (ADOT) road crew to pick up. It had been one year since the last work session, and it is amazing how much trash is discarded either intentionally or accidentally.

Additional road sections are available for adopting by contacting ADOT.

Celebrating the Arrival of Fall 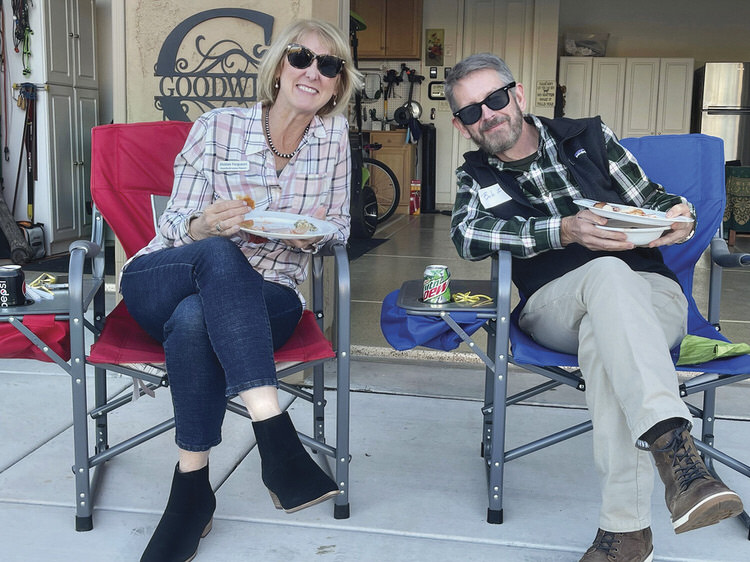 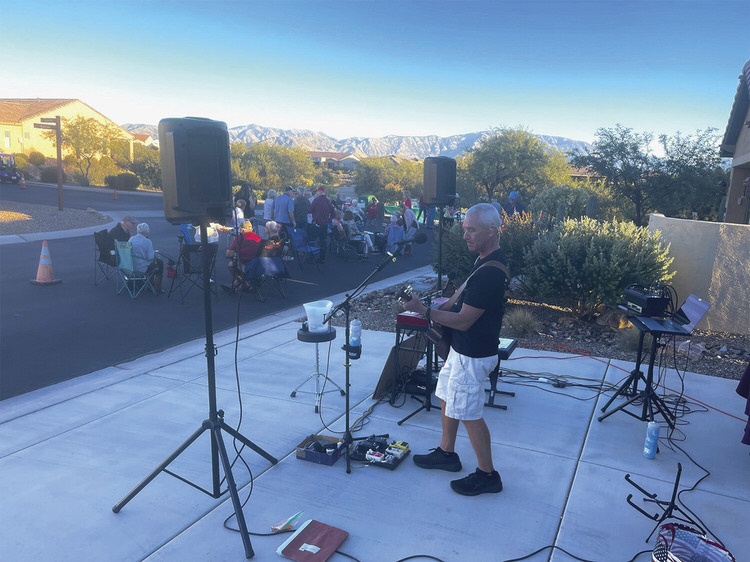 SaddleBrooke Ranch Unit 10 residents turned out in force Oct. 6 to acknowledge the seasonal change. The Autumn Street Party at the intersection of South Nectar Lane and East Pinyon Drive also welcomed the return of the snowbirds. They arrived here still decked out in their foul weather clothing—some traveling long distances from places like Seattle, Eugene, Billings, Minneapolis, Detroit, Denver, and Duluth. It didn’t take long for the winter clothing to disappear, replaced by shorts and T-shirts. It was a good old-fashioned potluck, with an abundance of wonderful food. Musical entertainment was provided by the popular local band, KT Klassics, featuring old-time favorites.

Unit 16B: ‘Twas the Night of Halloween 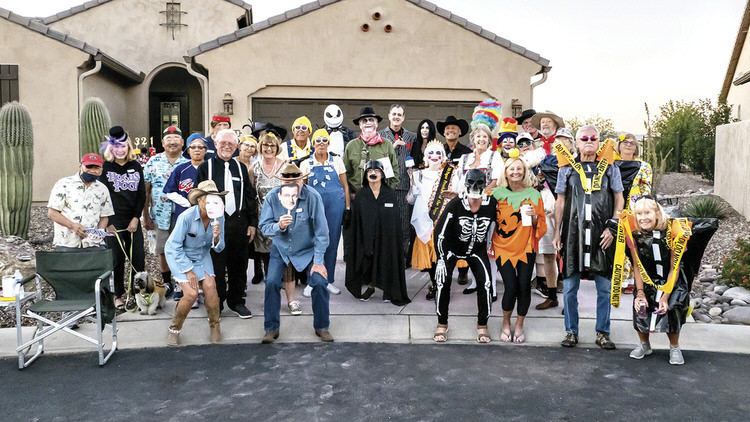 A poem by Pete Watson and Joy Hellard

With apologies to Tennyson, Keats, Poe, and every poet, but in keeping with the true Halloween spirit, the illiterate idiots of Unit 16B have butchered, hacked, and dismembered this beautiful holiday poem and transformed it into something totally unrecognizable.

‘Twas the night of Halloween, and all through 16B,

The ghouls and ghosts crawled out of their beds,

While visions of mayhem danced in their heads.

The Clowns, the Minions, and the Road Paving Crew

Joined the Boy Scouts and Paper Queen to just name a few.

When out on the street, there arose such a clatter,

Even Morticia and Gomez came to see—“What’s the matter?”

When, what to our bloodshot eyes should appear,

But a shiny new cart holding hot dogs and beer.

With a little ‘ole driver so lively and fun,

The witches and goblins all had a smile,

Drooling for dogs, the line stretched for miles.

But John sprang into action, so much to do,

On Bratwurst, on Sausage, on Chili Dogs too!

Crawling, slithering, and dancing along,

The 16B crew was one happy throng.

Soon tummies were tight as an old kettle drum,

But we all saved room for the Cake Walk to come.

Jenga and Cornhole were played in the street,

Mary and Vince Fung were the ones to beat.

Spider Peg and Dave rocked to the Monster Mash.

And the Hippies and Horse Thief were a Graveyard Smash.

And prizes were awarded to the Best Costumed.

Then John packed up his cart, and drove out of sight,

We yelled, “Happy Halloween and to all a—Good Night!”

If your Club or Unit is holding an event, call John Hardy at 907-354-2590 and have Poncho & Lefty’s Patriot Hot Dogs served at your party! He lives here at the Ranch and does a fantastic job!