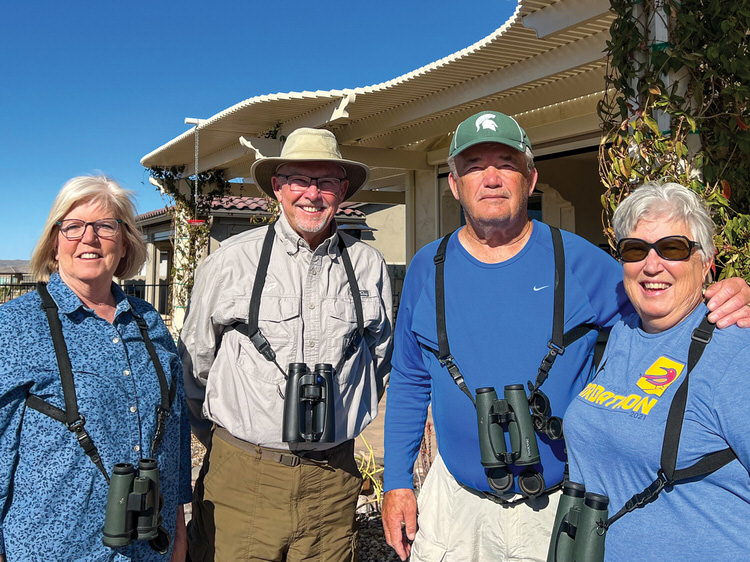 I am always amazed at the support of the SaddleBrooke Ranch (SBR) community, and the Birdathon was no exception. The SaddleBrooke Ranch Cuckoos—Laurie Mccoy, Jim Bradford, Deb Sandin, and Jim Hoagland—started the 24-hour Freestyle Birdathon in the evening of May 5 at the Ranch. Before turning in for a short night, we had already recorded 20 species. This was a great start toward our stated goal of 100 species. Peppersauce Canyon was the starting point at 4 a.m. the next morning where we heard the call of the Elf owl, leaving there with another 30 species. We stopped at the Arizona Trail where we saw a rare Botteri’s Sparrow along with a couple other desert birds.

In addition to the regular pledges, we received special pledge challenges for eagles and owls. We had hoped to see the Great Horned Owl with her two owlets, which we had previously scoped out in the saguaro along Webb Road. Unfortunately, they had already left the nest. Being close to the San Pedro riparian area crossing between San Manuel and Mammoth, we stopped to find many more species, moving us up to 75 species by late morning. We felt confident at that point about reaching our goal of 100.

The tongue-in-cheek “Lake District” (sewage ponds) of Mammoth let us down, yielding only one Mexican Duck.

Our next destination of Aravaipa Canyon Road, our focus was to find Gray Hawks, Common Black Hawks, and Zone-tailed Hawks. We snagged the Gray Hawk perched in a tree in the valley but missed on the other two hawks. Along the fast-flowing Aravaipa Creek, we spotted the Black Phoebe and Swainson’s Thrush. We next stopped at the Aravaipa Farms Orchard and Inn to find both the Inca Dove and Gilded Flicker. Laurie spotted a Zone-tail Hawk soaring in Mammoth. Next stop, Oracle State Park, we spotted the Woodhouse Scrub Jay. By this time, temperatures were in the 90s with only Willow Springs Road and SaddleBrooke Ranch left. On Willow Springs Road, we spotted two nests on the electrical poles. The first pole was a Red-tailed Hawk with three young eyas (babies), and the second pole housed a Chihuahuan Raven with two young chicks.

Before returning to SaddleBrooke Ranch, we spotted the Harris’s Hawk sitting on a nest near Oracle Junction. I had lost track of exactly how many species we had but knew we were close. We then returned to the Ranch, Jim and Laurie scouted out the back road for the Roadrunner while Deb and I walked the nature trail. Although Deb and I added a few more species from the trial, the Roadrunner was nowhere to be found. Little did we know it would be “the one that got away” to reach our 100th species.

On May 24, the SaddleBrooke Ranch was honored by Tucson Audubon Society with the award for the top fundraisers for the event. Thanks to all our supporters and the community of SaddleBrooke Ranch, we exceeded our goal of $5,000 by over $2,000. Good birding.