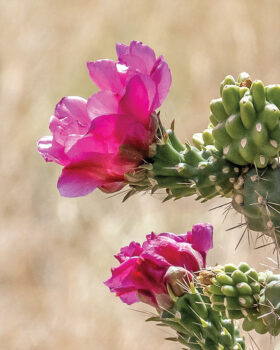 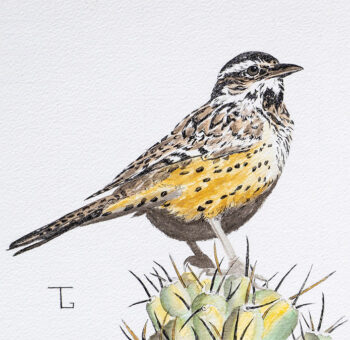 Watercolor by Gerry Tietje of a Cactus Wren

I have been writing the Nature’s Way articles for over two years and I am pleased to welcome Gerry Tietje to Nature’s Way writings. Gerry’s passion for nature extends beyond my passion for birds and will expand the knowledge of the biodiversity we are so lucky to have here at the Ranch. The SBR nature trail is one of Gerry’s favorite areas to photograph birds and other nature here at the Ranch. He has an extensive knowledge of butterflies, cactus, and wildflowers. Check out last month’s article by Gerry on butterflies.

Gerry grew up in a small town in Southwestern Wisconsin. He became interested in “anything nature” at an early age as he explored the marsh behind his home and canoed the river that bordered the marsh. He was most interested in the birds he saw and knew the common ones by name: robins, goldfinches, cardinals, blue jays, and sparrows. As he got into high school, Gerry began drawing birds and animals from photographs in magazines like Outdoor Life and Sports Afield. After high school, life took over with college, a move to Indianapolis for an engineering job, marriage, a move to San Diego for other engineering jobs, and raising a family.

It was not until Gerry retired that his interest in birds and birding resumed. He went on several field trips sponsored by the San Diego Audubon Society and became active in their annual Bird Festival. He also began pursuing digital photography for two reasons: (1) to capture images of birds that could be enlarged on a computer screen to help him identify field marks, and (2) to provide subject matter for pursuing photorealistic pen and ink drawing and watercolor painting. Mission Trails Regional Park, near his home in San Diego, provided many opportunities to observe and photograph birds in their natural habitat. Gerry became an active volunteer in the park’s visitor center. He walked many trails in the park and expanded his interests to subjects other than birds.

On one of his daily walks in the park, he met a wildflower enthusiast, and they began walking the trails together. Gerry began picking up the names of the different wildflowers and learned when each species bloomed each year; and, of course, he began to photograph them. Walks along the trails became more interesting as he was able to identify the different birds, plants, and later butterflies and reptiles. He developed slide shows of resident birds and wildflowers for Mission Trails Regional Park visitors.

In June 2021 Gerry and his wife, Claire, left San Diego and moved to SaddleBrooke Ranch. The day after they arrived, they got up early in the morning and joined our monthly bird walk on the nature trail. They have continued these walks, and Gerry brings along his camera so he can take photos to add to our e-bird checklists. He also joined the SBR photography group, PhotoWorks. When asked by group members what he likes to photograph, his common response is, “anything nature.”