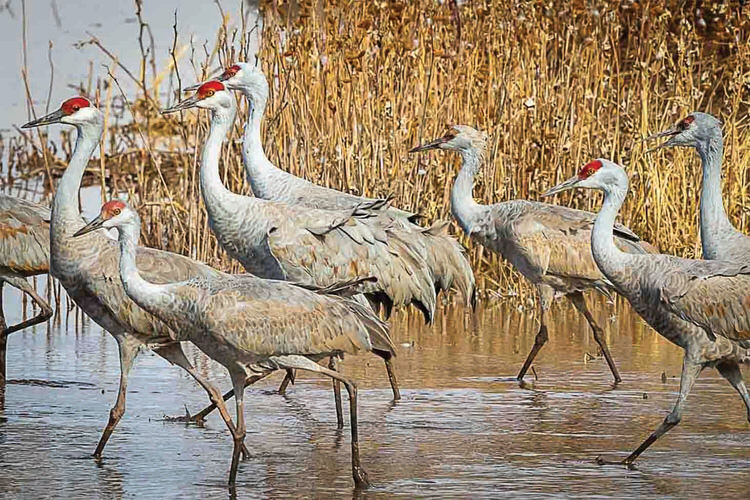 January is one of the best months to go and see sandhill cranes in Arizona, especially at Whitewater Draw Wildlife Area, an ephemeral lake. Once a former 1,500-acre cattle ranch, it was acquired by the Arizona Game and Fish Department in 1997. It is located 55 miles south of Willcox in the southern Sulphur Springs Valley. Starting in late September or early October, the cranes start showing up from both the Rocky Mountain population and Mid-Continental populations, both the lesser and greater subspecies of the sandhill cranes, with the lesser being more numerous.

As the numbers build, estimated to be between 20,000 and 30,000 by January, the birds feed on the residue grain in the nearby agricultural fields and then return to Whitewater Draw to feed on the small vertebrates and aquatic invertebrates in the shallows of Whitewater.

The history of sandhill cranes is magical, harking back to the beginning of time. Fossils of cranes have been found and dated to more than 10 million years old in Nebraska, and according to the Cornell Lab of Ornithology, the earliest unequivocal sandhill crane fossil, estimated to be 2.5 million years old, was unearthed in the Macasphalt Shell Pit in Florida.

The best time to view the cranes is just before sunrise and one hour after, as they leave en masse to forage in the nearby agricultural fields, giving you a great display as they leave. If you are not an early riser, watching the cranes return back into the Whitewater draw between 10 p.m. and midnight is an amazing experience. You will be mesmerized by the social behavior, including at least 10 different types of calls, various threatening postures, and elaborate dances for everything from joy to courtship.

The drive will take about 2 ½ hours from SaddleBrooke Ranch, but make it an overnight trip and stay at the historical Gadsden Hotel in Douglas, only 25 minutes away, or in Bisbee, about 30 minutes away. This will give you more than one opportunity to see the cranes. There is ample parking at Whitewater Draw and portable toilets onsite. Currently, overnight camping and RV parking is allowed with no fee.

There are many other waterbirds, ducks, and geese that can be viewed from one of several observations’ decks. The cranes usually stay until the middle of March when they leave for their northern migration to their nesting grounds. How long they stay depends on the weather and other factors. For us at SaddleBrooke Ranch, we might get lucky to see or hear them when they migrate north in the spring. If you are not able to make it down, you can check the cranes and other birds out on the Sandhill Crane Cam, www.azgfd.com/wildlife/viewing/webcamlist/sandhillcrane/cranecam,

which operates throughout the months that the cranes are there.

If time allows, then head over to Bosque del Apache in New Mexico to view the cranes there. You will not be disappointed. Happy birding.