Painters with their sunset with cactus in bloom paintings. The event benefitted the Oracle Schools Foundation.

Paint and Wine Fundraiser Event—A Fun Time for Everyone!

On March 24, 24 SaddleBrooke Ranch (SBR) residents enjoyed a Paint and Wine event, which was a fundraiser for the Oracle Schools Foundation (OSF). There was much laughter and fun as everyone tried their hand at painting the beautiful sunset picture with cactus in bloom.

The art instructor and SBR resident, Janice Mihora, provided a demonstration of painting techniques plus information regarding the blending of colors prior to the SBR residents starting on their canvas. During the event, Janice showed the participants various interpretations of the picture that a few of the artists had created. It was so delightful to hear the participants having such a good time and complimenting each other on their artwork!

As a fundraiser for Oracle Schools Foundation, Janice donated her time and materials. The foundation is the fundraising arm for the Mountain Vista Schools within Oracle. This school district services the students of Oracle; however, it also has students from San Manuel and Mammoth. Approximately 64% of the students are on free or reduced lunches.

The monies raised by OSF primarily pays for the preschool for 3- and 4-year-old children. Currently, there is no state funding for preschool.

The OSF also steps in and helps pay for items the school needs for the students. For example, during COVID and schools being closed, many students did not have the ability to access schoolwork from home. The OSF purchased 50 “hot spots” for the computers, which provided the students with internet access. 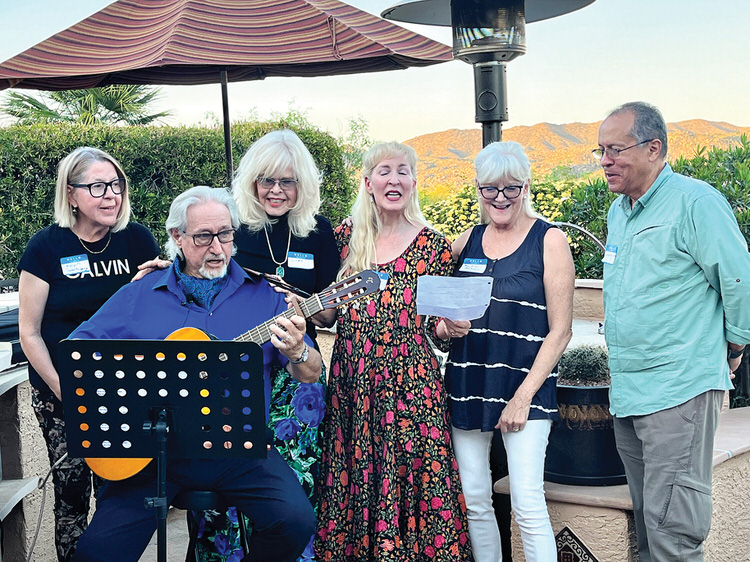 And the Winning Bid Goes to …

With a record-breaking 195 attendees, this year’s Oracle Schools Foundation Spring Fling Gala was a huge success! A special thank you to all who attended, bought, and bid, made monetary contributions, or donated their talents to the silent, live, or fixed price auction. We had 38 silent auction items and 12 great live auction items, including a weekend stay at a Mt. Lemon hotel, a Greek dinner, a library dinner, and more! There were also 27 fixed price events, including house concerts, theme dinners, several types of art classes, a night putting party, and many others.

Several of these events have already taken place. Last week, Randall Dighton donated his time and exceptional talent to entertain a group of 33 people on the patio at my home. Before the music began, people had a chance to socialize over appetizers and drinks. Then we settled in to listen to an outstanding performance. Randall has a beautiful voice, and he sang several Broadway show tunes, as well as some Celtic ballads. He did a great job of involving the audience—we were clapping, singing, and laughing as he performed a song dedicated to one of our desert pests, the javelina. His rendition of “Memory” from Cats was outstanding.

Another outstanding event took place at the home of Mary Jo and Barry Swartzberg, who hosted a “Starry, Starry Night” party. The evening began with delicious hors d’oeuvres and adult beverages, followed by a very interesting presentation about the planets, stars, and formations by Don Cain and Terry Joyce. They were joined by Richard Spitzer. All three men are accomplished amateur astronomers and members of the SaddleBrooke Stargazers. They each set up their huge telescopes so that all attendees had an opportunity to look at what’s “up there” and interact with these three experts who enlightened us about what we were seeing. It was a wonderful evening.

By attending functions such as these, you not only have an opportunity to mix and mingle with fellow SaddleBrooke and SaddleBrooke Ranch friends, neighbors, and new acquaintances, but you are contributing to the auction and supporting young learners in the Oracle School District. We are very grateful to Randall, Don, Terry, and Richard for donating their time and talent to the Oracle Schools Foundation Board.

If you weren’t able to attend the gala or didn’t have a chance to sign up for things you wanted to attend, there are some upcoming events: A Superbowl Bash next February, a beer making class, and a series of specialized classes for intermediate bridge players: “The Two-Over One System.” Please visit our website at www.oracleschoolsfoundation.com to sign up. Once again, thank you for supporting the foundation. We will be holding another gala next spring! 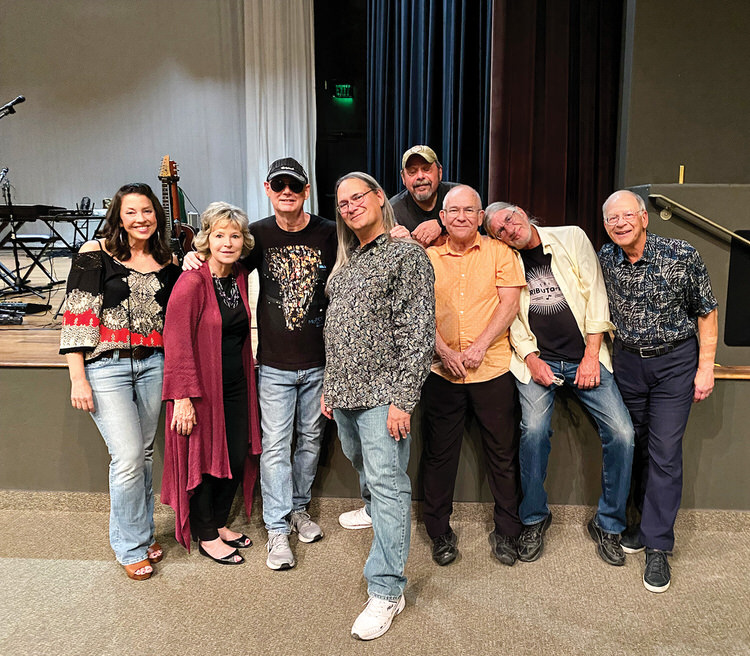 Oh What a Night:

On April 3, the Tributaries rocked DesertView Theater, playing to a sold-out auditorium for two and a half hours! This extremely talented group played selections from their nine shows: Good Morning Vietnam, The Eagles, Return to Woodstock, Linda Ronstadt: “Just One Look,” Simon and Garfunkel: “Homeward Bound,” Super Songs of the ‘60s, You’ve Got a Friend, That ‘70s Rock Show, and CSNY: “Love the One You’re With.” A very enthusiastic audience sang along, danced in the aisles, and tapped their toes to the songs we all know and love. It was such a great night, and even though the show didn’t end until after some attendees would normally have been in bed, there is no way anyone could have fallen asleep with all the energy in the theater!

After expenses, all proceeds from the performance will go to the Oracle Schools Foundation, which helps fund preschool and other educational programs at the Mountain Vista School in Oracle, which is SaddleBrooke’s school district. The money comes at a very opportune time, because the state of Arizona recently reallocated special education funding, which resulted in a $200,000 deficit for the school district. Consequently, the district will have to cut expenses, which could mean that they won’t be able to contribute to funding preschool. The foundation will most likely be asked to provide more funding, which we should be able to do with the proceeds from this concert and from the auction which was held in March. The foundation has a real commitment to the preschool program, because we believe that early childhood education promotes social, emotional, cognitive, and physical development during children’s formative years and helps to establish a foundation for future academic success. If you are interested in learning more about the Oracle Schools Foundation, please visit our website at www.oracleschoolsfoundation.com.