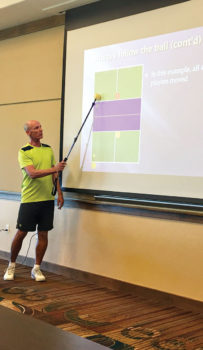 On November 1 the SBRPA Skills Development Committee hosted a Team Strategy Clinic at SaddleBrooke Ranch. This clinic was focused on the club’s 3.0 and 3.5 rated players. The format of the clinic included a presentation and Q&A in the La Mesa Room followed by demonstrations and on-court coaching at the pickleball complex. In all the 46 participants gained a much better appreciation for the intricacies of playing pickleball as a team.

Keith Sturdivant, SBRPA president, made the classroom presentation. He relayed his perspective on pickleball team strategy referencing well known pickleball instructors Helle Sparre, Joe Baker and Bill and Matt Previdi. Keith emphasized how best to work with a teammate on offense and defense so that your shots are better and how to make it harder for your opponents to make a good shot. Much of the focus is on taking control of the net, playing at the Non-Volley-Zone line, and moving in unison with the ball. Exceptional cases such as retrieving lobs were also covered.

At the courts Keith was joined by the other coaches, club members Bob Koerner, Craig McHugh, Brent Carlson, Paul Frederickson and Bob Hills. Four of the coaches demonstrated the exercises and their importance for all the participants. The group then split up for the exercises with each coach taking two courts. The exercises included a dinking game, serve and return and then working through the third or fourth shot. A lot of emphasis was placed on the positioning of serves, returns and third-shots to either neutralize play or give your team an advantage.

For those that did not attend, the presentation slides from this clinic are available at the club website in the Club Business section under Skills Development documents.

This was the 10th pickleball clinic put on by the club’s Skills Development Committee this year. The clinics provide instruction for 2.0 to 3.5 skill-rated players on .ariety of shots: forehand, backhand, dink, drop-shot an.olley, and on team strategy. Aside from these clinics the Skills Development Committee is also responsible for the club’s Introduction to Pickleball sessions held for beginners every Friday morning, with holiday exceptions. “This year’s program has bee.ery successful” according to Bob Hills, Chairman of the Skills Development Committee. Bob goes further in saying, “All the credit goes to the 40 club members that hav.olunteered to coach or assist with skills clinics and the beginners’ pickleball sessions throughout the year.”

The club is seekin.olunteers for next year’s Skills Development Committee. Anyone wishing t.olunteer should contact Bob Hill.ia the SBRPA website.