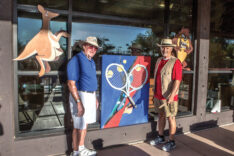 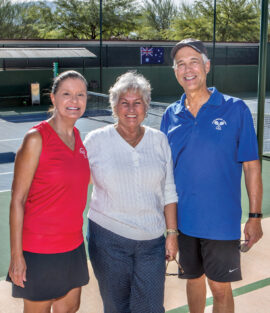 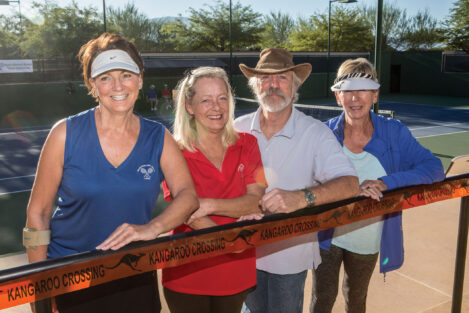 Decorated in the Aussie (Australian) format, the annual Steiness Tennis Festival at SaddleBrooke Ranch was held on October 20 and 21. The event consisted of two days of tennis matches in men’s and women’s doubles, mixed doubles and three singles matches for a few energetic players. There was a showing of the 1986 movie Crocodile Dundee on the evening before at the La Hacienda to get players in the Aussie mood. A “didgeridoo” was also demonstrated by Vern Nulk.

The festival is named after Helge Steiness, the club’s founder and first president, who passed away four years ago. His wife Krista has since moved from the Ranch to be closer to her family. She has returned each year to attend the festival. This year she was accompanied by her daughter, Susan, and son-in-law, Steve, her son, Dennis, daughter-in law, Erika and their children Harleigh and Oliver.

The weather was perfect both days as a total of 38 SBRTA members participated in this fun event. The members (players) were divided into two teams according to their tennis ranking. The team captains were selected and allowed to choose their team color (shirt color) and team name. The red team, led by Wes Hurst, was named the “Tasmanian Devils.” The blue team, led by Dean Alfrey, was named the “Wallabys.” Tennis action started at 8:00 a.m. on Friday and Saturday and included a total of 23 matches. Points were awarded for each matc.ictory. The first day the Wallabys dominated, but the Devils made a strong comeback on Saturday. At the completion of the match play the Wallabys came away with th.ictory. During the day we heard many Aussie expressions like “g’day mate,” blokes and sheilas, walkabout and ripsnorter. It was great fun for all players and those spectators who were on the edge of their seats for each match. Maybe not quite the edge but some “aussie” (awesome) tennis!

The tennis tournament was followed by a celebration dinner on Saturday evening. This year’s celebration was held at the MountainView Bistro at SaddleBrooke to accommodate over 60 attendees. Th.enue was set on the outdoor patio adjacent to the main dining area, which included a beautifu.iew and some friendly deer roaming the golf course before darkness settled in. The meal consisted of an ahi tuna appetizer, delicious chicken kabobs with apricot chutney served on rice, raspberry sorbet and cake.

The evening started with a social time followed by special entertainment from our own Alastair Stone singing Tie Me Kangaroo Down, Sport. President Steve Ordahl introduced the Steiness family. A gift basket from Krista Steiness was the first door prize given to a lucky attendee. Dinner was served, and during dessert Alastair again led everyone in the famous Australian song of Waltzing Matilda. I am sure most were singing that tune in their head while sleeping that evening. While calming ou.ocal cords the team captains presented the tennis tournament awards. A special appreciation gift was presented to Dean Alfrey for his dedicated work toward the tennis club and fellow tennis members. Thanks again, Dean!

For his encore, Alastair, noted for his trivia games, did not disappoint the crowd. This year’s trivia subject focused on facts about the Australian tennis open tournament and tennis players. One table had 10 correct answers, and each person at the winning table was rewarded with a can of tennis balls for their effort.During several intervals of the evening a total of 28 door prizes were given to lucky number holders.

The door prizes were graciously donated by several local businesses and Saddlebrooke Ranch resident members. A list of the prize donors was included in the written program so if possible please show your appreciation when you see them. A special thanks, presented by Elmer Klavetter, was given to three major contributors to the association including Sonoran Dreams Landscaping, Dr. Kimberly Tucker and Sunshine Experts. A special “Good On Ya Mate” to all contributors!

A successful event such as this is due to the time and commitment by many people. The following people (mates and sheilas) were responsible for putting together this year’s great festival: Terry and Anita Zimmerman, Event Planners; Carol and Billy Mihal and Sandy Schlager, Registration; Dean Alfrey and Wes Hurst, Team Captains and Facilities Coordinators; Beena Ordahl, Susan Cook, Jackie Levitt and Susan Swanson and Vern Nulk, Decorations; Georgine Hurst and Karen Klavetter, Dinner and Court Refreshments; Alastair Stone, Entertainment; Bo and Sandy Jessop, Game Announcers; Steve Weiss and Mike Wood, Photographers. Thanks to all!

If you are a SaddleBrooke Ranch Resident and interested in learning more about the SaddleBrooke Tennis Association and membership go to www.saddlebrookranch.org/tennis. The club also offers free tennis development clinics every Monday morning at the SBR Tennis facilities.