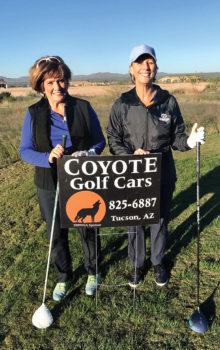 The Queen of Swings monthly tournament is held on the first Tuesday of each month. This tournament has one Low Gross winner and one Low Net winner each month. In addition, flights are paid out each month for Low Gross and Low Net. Congratulations to Diane Taylor and Lee Rinke for an outstanding day of golf!

Thank you to our premier sponsor, Coyote Golf Cars, for supporting the SBRWGA and sponsoring our Queen of Swings tournaments throughout the year!