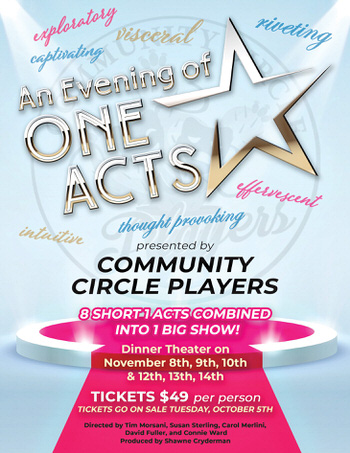 The cast has been chosen for Community Circle Players’ An Evening of One Acts—a charming dinner theatre production in a new format. In November, CCP is producing a night of eight short, stand-alone plays interspersed with a delightful meal.

Ranging from four to 10 minutes long, these tender, funny, one-act plays are:

Monica Gustafson is a retired speech language pathologist and children’s storyteller, who moved here with her husband five years ago from Winnipeg, Manitoba. She is ecstatic to be back working with the CCP players in her fourth production with the troupe. Her previous roles have included Susan in Don’t Drink the Water and Paige in The Outsider.

Carol Henry moved to the Ranch a year ago with her husband Bob and is excited to be a part of the funny show Faro Rides Again, her first CCP play. After acting in high school, Carol raised children, got her MBA, and taught math and business classes. Her last 22 years were spent in Colorado, where Carol and Bob started All Kids Dental. Carol took acting classes at the Denver Center of the Performing Arts, joined the Evergreen Players, and also participated in the Evergreen Players Reader Theater.

Lydia Blancato Strickland is a native of Manhattan who lived in New Jersey and New Mexico before moving to SaddleBrooke Ranch four years ago with her husband Bruce. She enjoys the energy of performing before a theater audience, creatively interacting with other cast members, and exploring different character roles. Lydia has been active in community theater, including CCP’s production of Woody Allen’s Don’t Drink the Water.

While the performance format for An Evening of One Acts may be new, patrons can, as always, count on a lovely dinner with salad, entrée, dessert, and no-host bar, plus the wonderful entertainment you’ve come to expect from CCP. The menu? A strawberry champagne salad, 8 oz. sous vide caprese chicken entrée served with rice and roasted asparagus, and a 3-layer chocolate mousse tower for dessert. The $49 tickets include dinner plus performance and go on sale Oct. 5 at 8 a.m. at the SB HOA-2 Administration Building or at noon online.

Every performance will be on the recently renovated stage in SB’s MountainView Ballroom. Seating will be at tables of six in half-moon style so that everyone will have a terrific view of the stage and be safely spaced. Tickets can be purchased by individuals or for an entire table if friends and neighbors want to enjoy the show together.

Mark your calendars and get your tickets. This is a production you won’t want to miss!