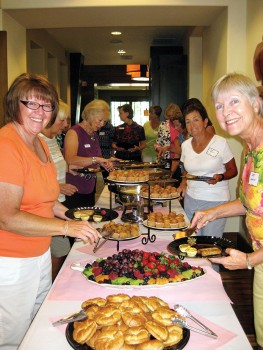 The SaddleBrooke Ranch Ranchette Putters put down their putters and picked up their forks as they gathered for a morning of visiting with friends and enjoying a delightful spread prepared by the staff of the Bistro Veinte. The ladies dined on mini quiches, sausages, fruit and rolls.

Since the normal putting schedule had been interrupted by construction of the new facilities and many ladies were missing the fellowship of the club, the Ranchette Putter Board organized this brunch to allow everyone to get together and catch up. All agreed it was a fun morning.

Linda Shannon-Hills, president, reported to the group that arrangements had been made with SaddleBrooke HOA One to use their green at 8:45 a.m. on July 22, August 12 and August 26. This will allow the putters to keep their skills sharpened until the green re-opens in the fall. In the interim, during the summer the newly invented “wicket” putting will continue at 7:45 a.m. on July 15 and 29 and August 5 and 19. Look for weekly reminders of these events in your email inbox.

The Ranch is growing. Many new folks are arriving, and it is expected that there will be an interest by many of these new women to join the Ranchette Putters when the green reopens. The club is excited about welcoming these future friends into the group. New members introduced at the brunch were Cindy Heck and Lee Rinke.

“Welcome Back To The Putting Green.” Existing and new members should be looking forward to this first fall event. The launch of the new putting season will be ushered in with a celebration of the completion of the putting green. Stay tuned for the announcement of this program.