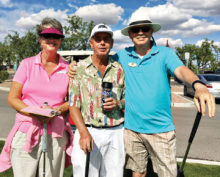 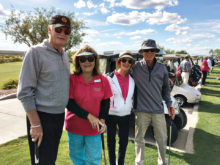 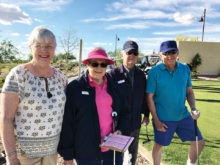 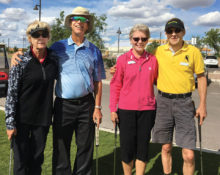 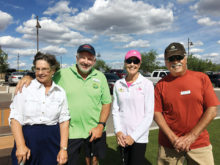 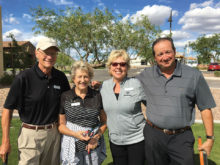 Every Wednesday morning the SaddleBrooke Ranch putting green turns pink with the Ranchette Putters. However, on May 10 the lady putters shook things up. Putting was held in the afternoon, and 34 club members signed up to putt with a spouse, friend or family member.

At 4 o’clock President Nancy Galant called “start your putters,” and 17 foursomes began the friendly competition. Even with prize money on the line, socializing seemed to be the prime objective of the putters as laughter filled the air. After putting a challenging course set up by Cindy and Denis Heck and Edie and Dave Kellogg, the putters adjourned to the La Hacienda Club to enjoy happy hour and continue the conversation and fun.

While everyone enjoyed a beverage, President Nancy Galant and Statistician Jeanne Bianchini presented awards for lowest team score, most holes-in-one and the money hole. With a keen eye and good reads these couples putted their way to some prize money. Almost two putting the course, lowest team score at 151 was awarded to Leslie and Les Brown and Deb and Don Lawson. Two teams tied for the most holes-in-one with eight: Cathy and Mark Johnson putting with CJ and Brian Kerley; Irene and Bill Keil putting with Ardie and Sam Rossi. Sending the ball direct to the money hole, Les Brown, Mark Johnson, Bill Keil and Craig Schreiber took this prize.

Ranchette Putters is a welcoming and social group of ladies. While we enjoy chasing the little white ball, socializing is the priority. The club currently has 86 members and welcomes you to give it a try. For membership information contact Marian Bianchini at [email protected]