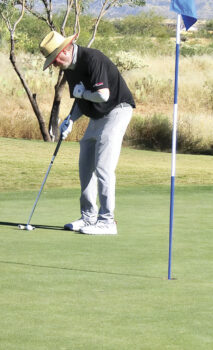 Bill Borden and Jim Rodine finished in a dead heat at 1 over 145. The playoff was three holes then a hole-by-hole sudden death, if needed, to determine the winner. Jim took a one stroke lead on the first hole holding it through hole two. Bill won the third hole forcing the playoff to sudden death on hole four. Bill prevailed on hole four and is our newest Founders’ Cup Champion. Congratulations to both Bill and Jim.

The entire tournament was closely contested. Seven players tied for third including Larry Bickelhaupt, Jim Cook, Ken De Leo, Jack Dyck, Dennis Johnson, Bill Lockett, and Hobie Richards with scores of 148. Another stroke back at 149 were five players tied for tenth. These included Dan Anderson, Brian Baker, Brian Grover, David Gruca, and Rick Wright with scores of 149. Of note was the tournament low net shot by Dan Anderson on day two of 69.

Following the second day of competition a lunch was held. There we had the opportunity to share time with some of the original founders. Attending with us were Steve Mason, Paul Lapotosky, Ken Hull, and Mike Koen. Ken and Mike competed. Though we missed some they sent along their greetings and hopes to attend the 2023 Founders’ Cup Tournament.

Congratulations to all. It’s great to be golfing.