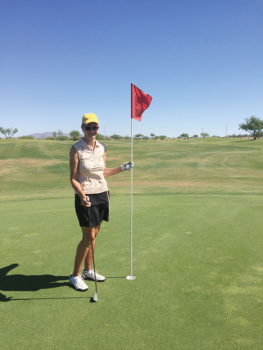 Karen McIver after her eagle on hole No. 6

A couple of other notables were Jeanne Osterlund broke 90 for the first time with an 89; Carol Mihal had an 84; Marlyce Myka had a chip-in bird on 18; and Niner Pam Horwitt had her best game ever.

Lastly, there was excitement on hole No. 6 for Niner Karen McIver who eagled the 222 yard par 4 hole. Karen had a great drive, then used an 8 iron to land on the front of the green. The foursome cheered as they watched this second shot roll into the hole. This was Karen’s first eagle. Congratulations, Karen.

Thanks to Mary Snowden and Ardie Rossi who organized the day to all that played and made this a successful day.