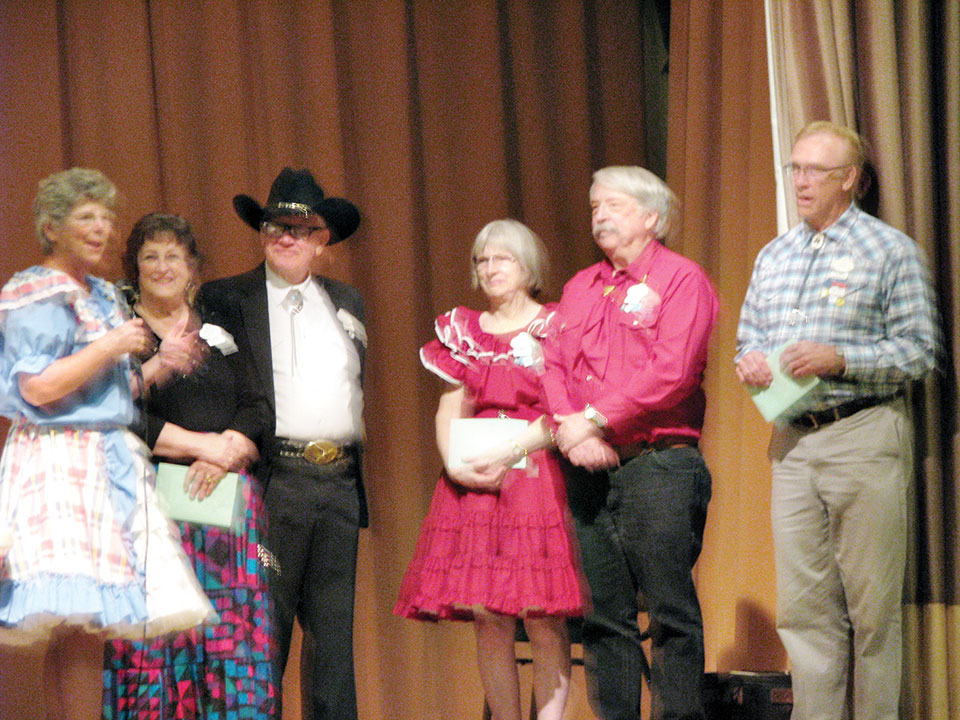 Thanking the teachers and coordinators

My husband John and I felt proud as we graduated from the Square Dance class of 2017 receiving a diploma and official name tag. Hmm, come to think of it no one failed the course.

You have to develop the ability to laugh at yourself (not pard’ner, of course) when you make simple errors of turning the wrong way and if you hear Larry calling “swing your partner and promenade home” and your partner is with another “pretty girl,” no matter you find another handsome dude and hope you can creep back to your correct place without breaking up the set.

It is quite a thrill when you get turned around this way and that and hear Allemande left with your corner…and there he is; it makes you smile!

The dance originated from Morris Dancing in England. This was done by men for propriety’s sake, and the men added bells to their feet for oomph. Then came the Revolutionary War and all things English were less popular. It took on a French influence at this time. The names Allemande, Promenade and Do se Do (which is a bastardization of dos-a-dos meaning back to back) persist today.

Square Dancing became more of a country dance as the towns grew. It was in Appalachia that they began standardizing the ‘cues’ or ‘calls’ and square dance calling became an art form in its own right for the singing, the teaching and the humor.

By the late 19th century the waltz and the polka, which permitted close holding, took over; then in the twenties swing and jazz. Square dancing was definitely considered old fashioned even in the rural areas and pretty non-existent in the towns.

Then along came Henry Ford! He had wonderful memories of square dancing as he grew up outside Detroit. When he summered in Massachusetts he was impressed by a dance instructor living there named Benjamin Lovett.

Ford felt this type of dancing was a wholesome activity, and he enticed Mr. Lovett to move to Dearborn from New England by offering him a princely salary and the promise of a new car each year.

Mr. Lovett started square dancing classes for all the Ford factory workers; he had it taught in the local schools and instructed other callers from around the country. There was so much square dancing now that there weren’t enough fiddlers to accompany all these classes. His pal Thomas Edison invented records…problem solved.

It is still considered old fashioned and you can’t ‘close hold’ (which I love); however, do check out ‘Tech Squares’ at M.I.T. on youtube. It is considered the Hot Geek Scene as high tech centers of Stanford and M.I.T have lively square dancing clubs where they perform complex, challenging fast dancing as mesmerizing as a Rubik’s cube.

You can learn to square dance at M.I.T. or you can join Larry’s class at SaddleBrooke this fall starting October 8, 7:00 p.m. in the MountainView Ballroom.

For more information check out our website at SaddleBrookeSquares.com or call Bob White at 818-9482.