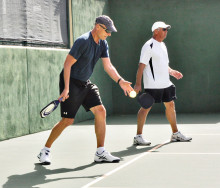 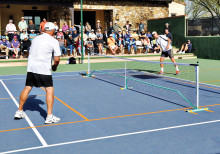 Scott Moore and Bob Koerner demonstrating the power of dinking

Scott serving during a private lesson

Scott Moore and Bob Koerner demonstrating the power of dinking.

The SaddleBrooke Ranch Pickleball Association’s Skills Development Committee hosted a free pickleball demonstration clinic on Monday, March 7, conducted by Scott Moore, a four-time 2015 National Pickleball Tournament gold medalist. The event was attended by over 100 residents and pickleball enthusiasts at the SBR Tennis Stadium. Scott opened his presentation giving an overview of his athletic career and how he began playing pickleball just over four years ago. While only competing for just over two years, Scott has become one of the country’s top pickleball players. The clinic covered basic shots, drills and an action-packed play demonstration including Scott and three of the SBRPA’s top players: Bob Koerner, Jody Koerner and Keith Sturdivant. The demonstration gave all in attendance a good idea of top-notch competitive play. The demonstration play was followed by a Q&A session and the Pickleball Club presenting Scott with a club jacket by Lupe Cook and Priscilla Wolf, co-chair of the skills development committee.

The remainder of Monday and Tuesday was devoted to semi-private lessons for 34 club members. Scott led the students through drills to improve their pickleball play. One tip Scott gave everyone was to “watch the holes on the ball” in order to improve concentration and hand-eye coordination. Another was to keep your head down through your stroke in order to make good ball contact and control. All the sessions ended with Scott playing a few games with the students where he injected reminders and new playing tips along the way. As a student Bob Hills said, “I know I was having difficulty with a few strokes, and it was good to have someone with his trained eye to identify the problem and instruct me on how to correct my swing.” All the students interviewed had very positive comments about their session with Scott.

A special thanks goes to Ken Cook for working closely with Scott to organize this special clinic in coordination with the skills development committee. We must give a big thank you to Alastair and Helga Stone for providing living arrangements for Scott during his visit.

There is a lot of information about Scott Moore on the internet including a number of videos of his play during the national tournament. In brief, Scott is 54-years old and describes himself as a lifelong racket-sport fanatic. Besides playing competitive pickleball, he is the Western U.S. and International PaddleTek (pickleball paddle) Exclusive Master Distributor. Scott and his son, Daniel, were honored as the 2015 Pickleball Rocks Players of the Year. Lupe Cook, co-chair for the SBRPA skills development committee said, “He is such a great person, answering many questions about the sport and how we can improve our own club’s skills.” We look forward to an encore clinic with Scott in the next year or two.