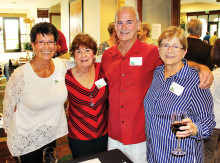 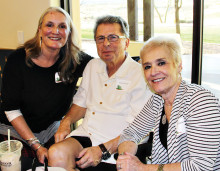 In the beginning there was the Ranch and some hardy settlers who took a leap of faith believing in the vision of a man named Robson. There was no clubhouse, only a golf course. No dog park, only the paved streets. No swimming pool, only irrigation systems. We were the first who came, chose a vacant lot and could see the future that was promised and bought with trust in that promise. We hailed from California, Michigan, Indiana and Illinois. From Colorado, Wisconsin, Montana, Alaska, New York and other points north, south, east and west.

In the middle of the worst housing bust in decades, we sold our homes (or not) and slowly filled the available lots along Arroyo Vista, Arroyo Grande, Misty Basin, Gulch Pass, Agarita and Ankole. In those early days we all knew each other because there were so few to keep track of. As the years passed more homes were built, the clubhouse and pool opened, the dog park was realized, pickleball courts became crowded, and it got harder to recognize all the faces and remember the names. We were no longer a small community, but we were still all Pioneers with friendships based on when we moved here, not on unit or street address.

This Pioneer group gathered together on February 19 to remember those early years as intrepid settlers who believed Mr. Robson and his promise of a beautiful community, and like those who came after we have been rewarded. Thanks to Alyce Grover, Chris Nunamaker and Nini Falconer for organizing a wonderful opportunity for us to look at pictures and reminisce. Now we wait as the next phase takes shape; the new golf pro shop will open soon. A pickleball facility worthy of tournament play and a deluxe dog park for our furry neighbors reside near the planned crown jewel clubhouse where we will dine, dance and remember when we were among the first to call SaddleBrooke Ranch home.