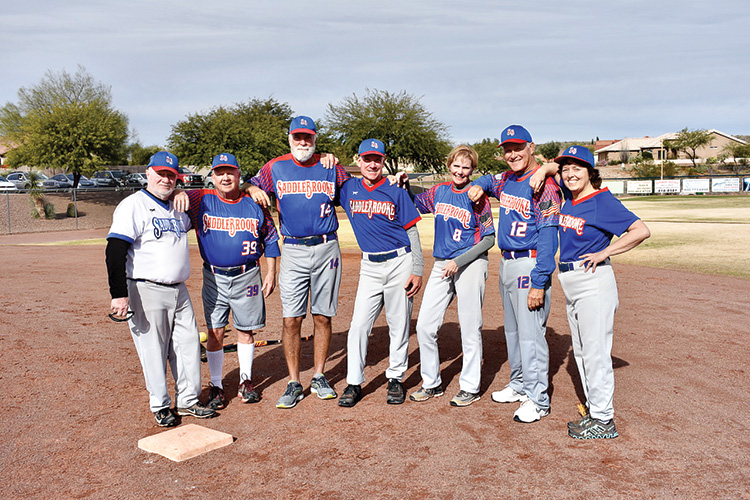 There’s lots to do at SaddleBrooke Ranch, but one activity many residents may not be aware of is softball; probably because the games are played at SaddleBrooke.

SaddleBrooke Senior Softball is open to Ranch residents. This past fall season saw 11 men and three women play on the state-of-the-art field complete with dugouts, electronic scoreboard, and stadium seating at the foot of the Catalina Mountains.

It’s slow-pitch softball with ten fielders. Each team usually has 11 to 12 players, and everyone plays the field a minimum of four innings. Courtesy runners are allowed. The games are seven innings with a five-run limit per inning for each team until the last inning when there is no limit. There are two umpires, a scorekeeper, and scoreboard operator for each game.

There are five leagues based on skill level. The Recreation League plays Monday; Sidewinder League on Wednesday; Coyote League (ages 65 and above) on Thursday; Community League on Monday, Tuesday, and Friday; and the Competitive League on Tuesday and Friday. Many players compete in more than one league.

Ranch players site the camaraderie, competition and exercise as reasons for playing. What they have in common is a continued love for the game they played as kids. For two hours a day, they get to put on a team uniform, hit a ball, catch and throw it, and run the bases. It’s summer all over again, no matter the season.

Steve Schneck thought his baseball days were over until he moved to the Ranch and was reintroduced to the game through SaddleBrooke Senior Softball. He has been playing for five years and intends on playing for another ten providing he maintains his good health. His wife Mary, who also plays, says, “we laugh, we play, we have fun—we can all benefit from that.”

Janice Mihora, a five-year SaddleBrooke softball veteran, says playing ball is like being a kid again. John Shaughnessy, a newcomer, also appreciates the benefits. “Win, lose or draw, I consider it a happy day when we all walk off the field.”

Hugh Parker, playing since the fall of 2014, says there are leagues to suit just about any skill level from recreational to competitive. And Charles Hendryx, a SaddleBrooke softball player for six years, notes that most players started with senior softball after not having played in 20 to 40 or more years.

Jeff Stolze, the new vice president of SaddleBrooke Softball, has been playing there for about six years. He’s an old baseball guy, he says, and after 35 years away from the game, he can now play again with others who really enjoy being out on the field.

He encourages his Ranch neighbors to come out to the field and watch a game to see what a great thing they have going. He would also invite them to come to practice sessions to get on the field, take some swings, and throw the ball around. He’s amazed at how many people he sees coming out who haven’t played in years that, after a while, can still play at a high level and have fun.

The winter season starts Jan. 13, when about 165 men and women play Monday through Friday over 15 weeks in the five different leagues. The first game starts at 9 a.m. Last winter season, there were 24 teams playing 14 games a week.

The league is celebrating its 15-year anniversary this season (the first game was played May 17, 2005). Games are played year-round, and there are four annual holiday tournaments, including St. Patrick’s Day in March.

The field is open for practice Monday through Saturday until Jan. 11 and then during the season on Thursday and Saturday mornings. The league provides gloves, bats and a supportive environment if you haven’t played in a while or ever. All skill levels are welcome.

If you are interested in playing on one of the best softball facilities in southern Arizona or even watching your neighbors, go to saddlebrookesoftball.com to learn more.