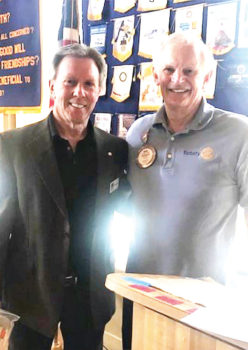 Dr. Don Jorgenson of ShelterBox and Doug May, President of the Rotary Club of SaddleBrooke.

Dr. Don Jorgenson, Former Executive Board member of ShelterBox, USA and the 2018 recipient of the Presidents Volunteer Service Award from Donald Trump, was the guest speaker at the March 21, 2019, meeting of the Rotary Club of SaddleBrooke. Don spoke about the recent missions to locations the Red Cross does not service. He also gave us the inside scoop on a number of things that happen during catastrophic events around the world.

ShelterBox was started by the Rotary Club of Cornwall, England, as a service to help people displaced by natural disasters and conflicts. The need quickly outgrew the resources of their club and is now partnered with Rotary International as ShelterBox International, providing aid internationally. A companion organization, ShelterBox USA, was established so donations in this country would be tax deductible.

ShelterBox provides a large, green plastic tub that contains a weatherproof, family-sized tent, ground cover mats, blankets, a unique water filtration system, cooking utensils and, if necessary, a hand tool kit for repair and rebuilding efforts. Each ShelterBox is tailored to the needs of the particular disaster. The decision to deploy ShelterBoxes is based on the need of more than 200 people for more than 30 days and is integrated with government and other aid. It is estimated that there are more than 85,000 people displaced in the world.

In 2004, more than 22,000 ShelterBoxes were distributed to victims displaced by the Indian Ocean Tsunami. Other deployments have included the 2016 typhoon in Fiji, the Syrian refugee crisis, the 2015 Nepal earthquake, 2013 Philippines typhoon, 2011 Japan earthquake and tsunami and the 2010 Haiti earthquake. In the U.S., deployments were made in response to Superstorm Sandy, Hurricane Harvey, Hurricane Katrina and tornadoes in Oklahoma and Arkansas. Currently, ShelterBoxes are being deployed to victims of the recent African cyclone in Mozambique, Malawi and Zimbabwe.

ShelterBox has a four-star rating by Charity Navigator for the high percentage of contributions that benefit recipients. For more information on recent deployments and donation opportunities, visit the website at www.ShelterBoxUSA.org.