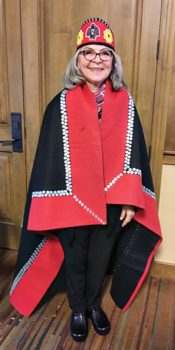 On Thursday, February 21, Toni Kahklen-Hoffman and Bob Elder visited SaddleBrooke Ranch to give a presentation on ravens called Speaking of Ravens. Bob is a docent for the Arizona Sonora Desert Museum in Tucson and Toni is a Native Tlingit American and a member of the Raven Moiety. Both live in Oracle but Bob and Toni’s husband worked together in Alaska.

This writer has always been fascinated with ravens during our many travels around the West. During Bob’s presentations, he talked about ravens being one of the smartest animals proven many times by scientists. In captivity, ravens can learn to talk better than some parrots as well as mimic other noises. Many have observed the raven making toys, a rare animal behavior, by using sticks, pinecones, golf balls or rocks to play with each other or by themselves.

Evolutionarily speaking, the deck is stacked in the ravens favor. They can live in a variety of habitats, from snow to desert to mountains to forests. They are scavengers with a huge diet that includes fish, meat, seeds, fruits, carrion and garbage. They can trick another animal to steal their food. Having very few predators, the raven can live a long time: 17 years in the wild and up to 40 years in captivity.

Ravens mate for life and live in pairs in a fixed territory. When their children reach adolescence, they leave home and join gangs. These flocks of young birds live and eat together until they mate and split off from the gang.

Many Native American tribes worship the raven as a deity in and of itself, the Tlingit people of southeast Alaska are one of the many groups. They have two moieties, (otherwise known as descent groups) in their society. Our second speaker was Toni Kahkien-Hoffman, a Native Tlingit American. L’eeneidi, or Dog Salmon, talked about ravens from the Tlingit cultural perspective and her experiences growing up in southwest Alaska. She showed photographs of her village in Alaska as a child and brought clothing from her family.