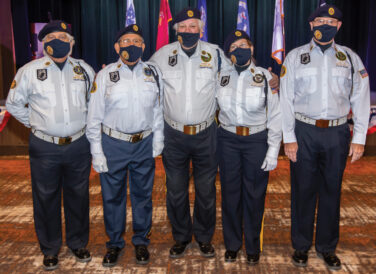 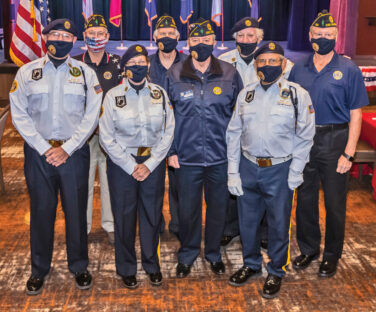 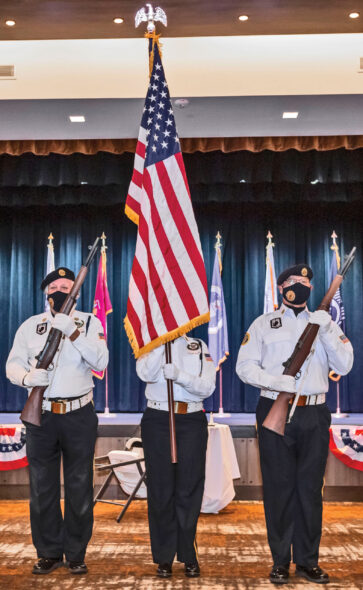 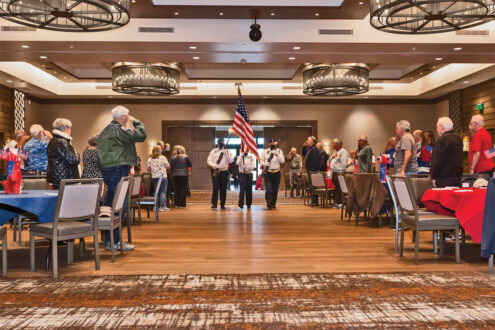 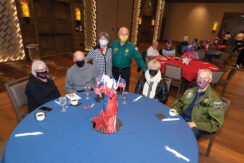 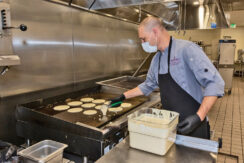 Jeremy Immes, Director of food and beverage, making pancakes for the event. (Photo by Steve Weiss) 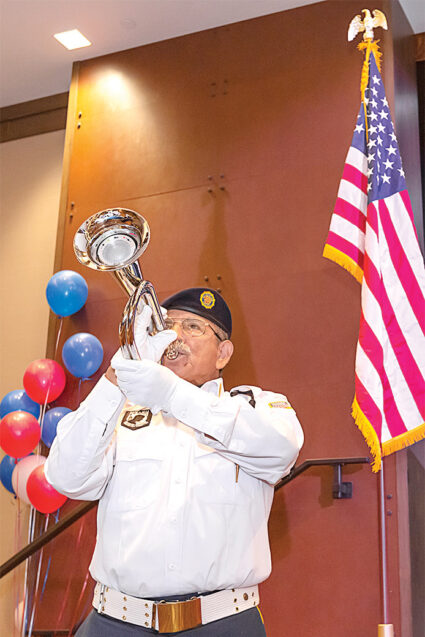 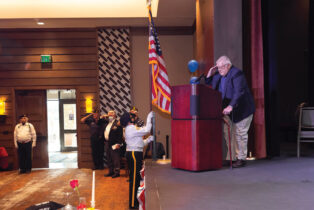 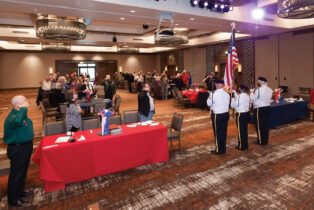 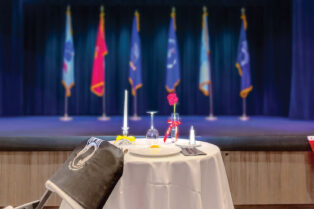 For the first time in the five years of the Veterans Day festivities, the complimentary breakfast was preceded by a special Veterans Club celebration to pay tribute to all of our resident veterans. The ceremony was the highlight of the event this year and seemed to be appreciated by all who attended. The ceremony’s opening began with the playing of patriotic music followed by the colors being presented by Legion Post 132 Honor Guard, followed by an opening prayer by the Post 132 Chaplain.

After the Veterans Club co-organizer Charles Wren made some opening comments, the Veterans Club Roy Thompson explained the Missing Man’s Table’s items’ symbolic meaning. This was another new and inspirational attribute of the celebration. The Missing Man’s Table has many symbolic meanings, all of which emphasize our concern for our men and women still missing in action or are still prisoners of war (POW). A yellow ribbon on the vase represents our continued determination to search for those missing, and the rose represents the life of each missing person and their family and friends. A lemon slice signifies those captured’ bitter fate, and the pinch of salt represents the tears shed for those missing. The Bible shows the strength gained through faith, and the candle is reminiscent of the light of hope. The ceremony presentation concluded with the Legion Post 132 bugler’s playing of Taps.

During breakfast, a slide show was prepared and shown by Ranch resident Carol Andrews. Carol invited all Ranch veterans to send her pictures of them taken during their time of service. It was a challenge to grasp who was who, then and now. Obviously, some changes had been in the making for some time now.

Roy said that he was interested in organizing this celebration to acknowledge and honor those who served, and those still missing in action. He also wanted to provide a venue for the Ranch veterans to reflect and talk to one another and perhaps share a part of their stories that only other veterans could understand and appreciate. Roy said he believes that many young men and women of his generation who are today’s veterans, were inspired by President John Kennedy’s call to “ask not what your country could do for you—ask what you could do for your country.” The phrase resonated and challenged many young men and women to look beyond themselves and contribute in ways more significant than just self, but to the public good.

Some joined the Peace Corps, and many others chose the U.S. Armed Forces to contribute to what they saw as a public good. For many of that generation, the call for public good required a significant paradigm change.

The Veterans Club is an organization that provides old (mature) veterans an opportunity to continue giving something of themselves to their fellow man and the SaddleBrooke Ranch community’s public good. The club is a charitable, fraternal, and educational organization endeavoring to perpetuate patriotism and remember our missing and fallen military personnel and history.

Thanks to the Ranch House staff, especially Kelly Cardwell, the Ranch House Food and Beverage Manager, for providing the Ranch residents a wonderful meal and graciously synchronizing the activities and decorating the ballroom. Thanks also to Ken Robinson, Liaison at Large.

For more information about the Veterans Club, please contact Roy Thompson by email at [email protected]