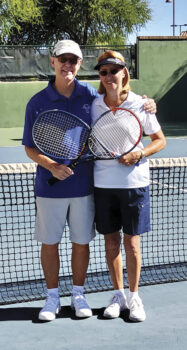 Mike and Carol Fielding moved to the Ranch from Salem, Ore., in 2013. They had been visiting the area since their daughter went to ASU from 1997 through 1999 and now tell her it’s her fault that they left the drizzly Oregon weather and moved to the desert for fun in the sun. The Fieldings note that she and their four grandchildren don’t find much humor in that!

They both tried pickleball for the first four years at the Ranch, playing in several tournaments. Mike served as the VP on the SaddleBrooke Ranch Pickleball Association (SBRPA) board for two years, and Carol chaired the court scheduling committee during the transition from four to 24 courts. Then Mike felt the urge to go back to tennis after having played both high school (Southern California) and college (Gonzaga University) tennis. Carol followed, where she attended the Monday morning development classes with Dean Alfrey. Carol never played tennis until moving to the Ranch. Tennis is not popular in Alaska, where she lived for 10 years!

Mike served as the president of the SaddleBrooke Ranch Tennis Association (SBRTA) for two years in 2020 and 2021 and served on the ratings and testing committee; Carol served on the court scheduling committee as both a committee rep for the 3.0 ladies and as the chairperson.

They both thoroughly enjoy the friendships they’ve made playing tennis at the Ranch, and love being on the courts two to three times a week … Mike with the 3.5 men and Carol with the 3.0 ladies.