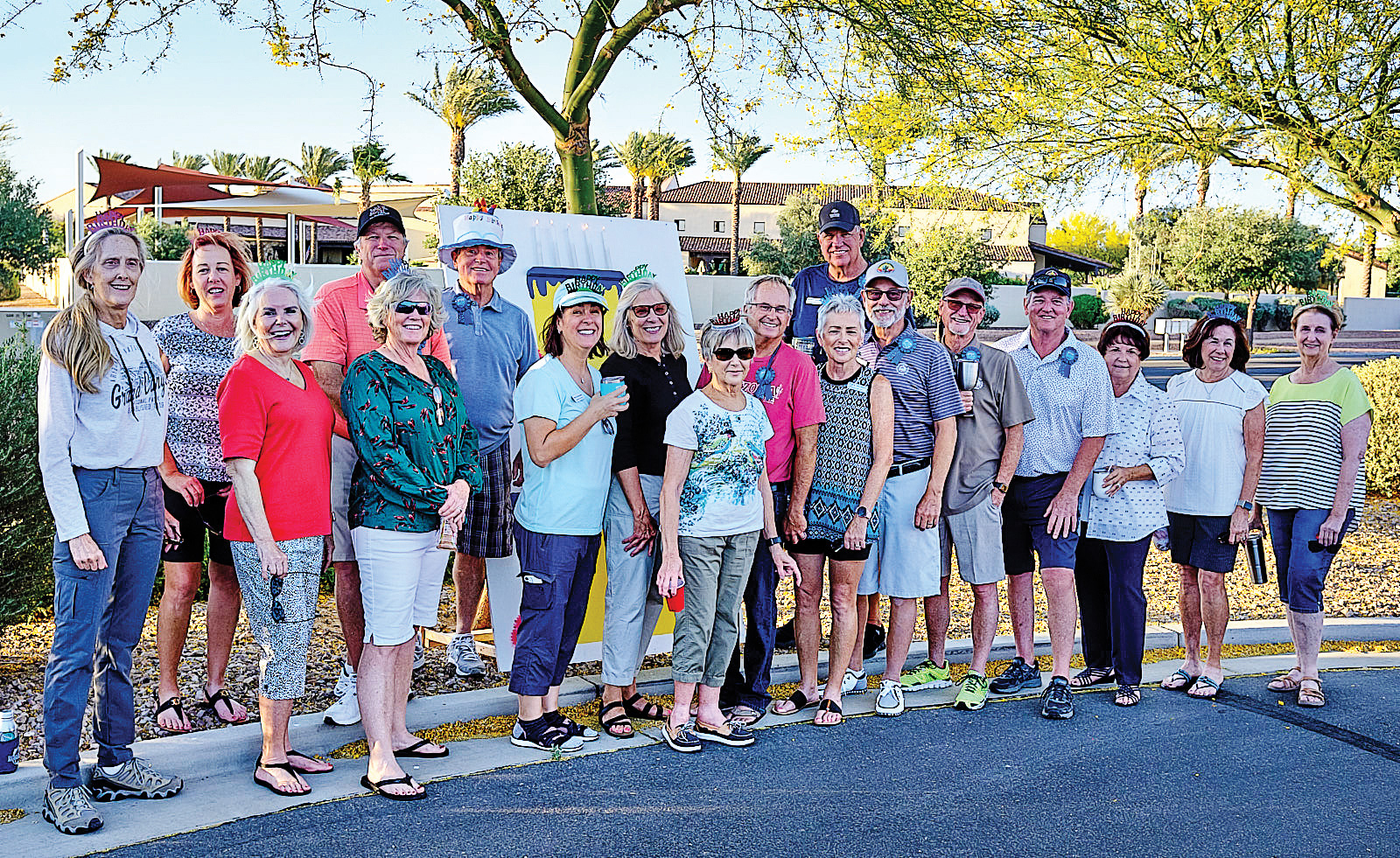 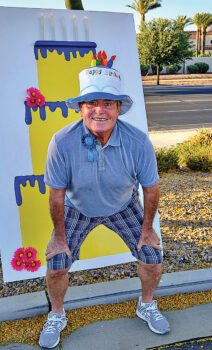 Unit 8A resident Tim Malone celebrates his milestone birthday at the unit’s birthday party on May 21.

During the COVID pause, many Ranchers celebrated a milestone birthday—a birthday ending with a five or a zero. With small groups and social distancing, plans for large parties had to be shelved or postponed.

Never missing an excuse for a party, Unit 8A decided to throw a big birthday party for those unit residents who had a milestone birthday between the beginning of the pause in March 2020 and the end of May 2021.

Twenty Unit 8A members were honored at an outdoor celebration in the unit on Friday, May 21. Decorating proved to be a major challenge on the very windy afternoon, but Happy Birthday balloons were tied to chairs and tablecloths were weighted and taped.

As they arrived, each honoree was presented with a birthday crown (the ladies) or a birthday ribbon (the gents). Honorees then posed for group and individual pictures in front of a giant yellow and blue billboard birthday cake, complete with flickering candles, pink flowers, and a rope securely tying it to a tree.

Paul Thomsen served as master of ceremonies for the event, welcoming honorees and guests and introducing the evening’s musical entertainment, Karl Knight. Karl, Paul, and Madoka Knight recruited guests to play the kazoo and accompany Karl as he played his guitar and sang “San Francisco Bay Blues.” Karl then donned a western hat and shared the funny story of how he, a Brit, came to learn, play, and sing the next tribute to the honorees, “My Next 30 Years,” by country singer Tim McGraw. All agreed Karl sounded “exactly” like Tim McGraw, British accent and all.

Each honoree received a jumbo cupcake, decorated with blue and pink icing and a birthday candle. As they made their wishes and blew out candles, everyone sang “Happy Birthday,” accompanied by Karl on guitar and guests with kazoos. Guests were also treated to a decorated cupcake and a few songs for line dancing.

Milestone honorees took home a birthday balloon and later received a souvenir copy of their birthday pictures. Four additional Unit 8A members celebrated milestone birthdays during the COVID pause but were unable to attend the event. Happy birthday to all!

Betty Ryan, Kate Thomsen, Judie Townsend, and Janelle Authur were hostesses for the evening. Bob Townsend designed and painted the giant birthday cake billboard and Bob Authur was the photographer.