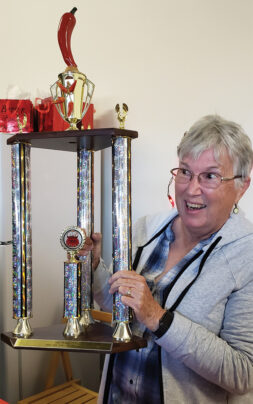 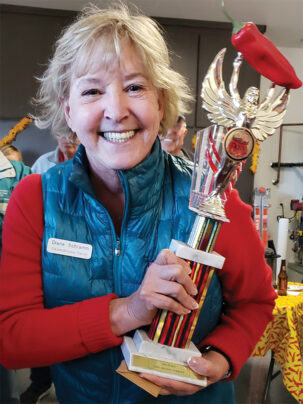 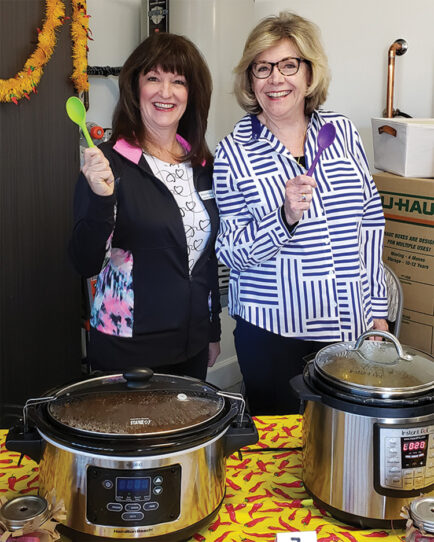 After celebrating 16B‘s 70th home completion, the unit held its inaugural Chili Cook-Off on Feb. 25, 2020. Despite the wind and cold, over 50 residents attended the event which took place in Diane Schramm’s garage. Tables lined the walls, laden with steaming crockpots, mounds of corn breads, and a variety of yummy desserts, as twelve chili contestants vied for the coveted Perpetual Rotating Chili Pepper Trophies. During the event, 16B residents tasted each chili then voted by bean for their three favorites. The greatest number of beans placed in each of the twelve covered jars determined the winners. After the official bean counters tallied their work, the results of the 16B Chili Cook Off were announced.

Diane Schramm’s third place White Chicken Chili recipe originated from her daughter’s high school home economics class. Shared from daughter to mother, Diane finds this chili one of her favorites. Second place was awarded to Laurie McCoy for her recipe for Firehouse Turkey Chili. Thirty-five years ago, when Laurie’s husband worked as a fireman, the American Heart Association introduced healthier food alternatives to his squadron, and this chili was created. In first place was Sherry Pietrzykoski, with her Texas Roadhouse Chili. Sherry found this no beans recipe on the internet, and has tweaked it over the years. However, Sherry states its success lies in the lengthy simmering. All who entered the 16B Chili Cook-Off received a participant’s chili pepper necklace, and an award bag filled with cooking condiments.

Braving the chilly, blustery day, the residents were warmed by the great food, the laughter, and the friendship found in this unit. Those driving down Dead Wood Trail in 16B may enviously observe the stunning trophies proudly displayed in the front windows of the winners. Reminiscent of the famous leg lamp from the movie, A Christmas Story, each striking award catches the eye, with an array of gleaming metal and bright red chili peppers. All who participated wish to extend a huge thank you to all contestants, the organization committee, and the Social Committee founders, Pete and Roxanne Watson, who made this event fun-filled and successful.