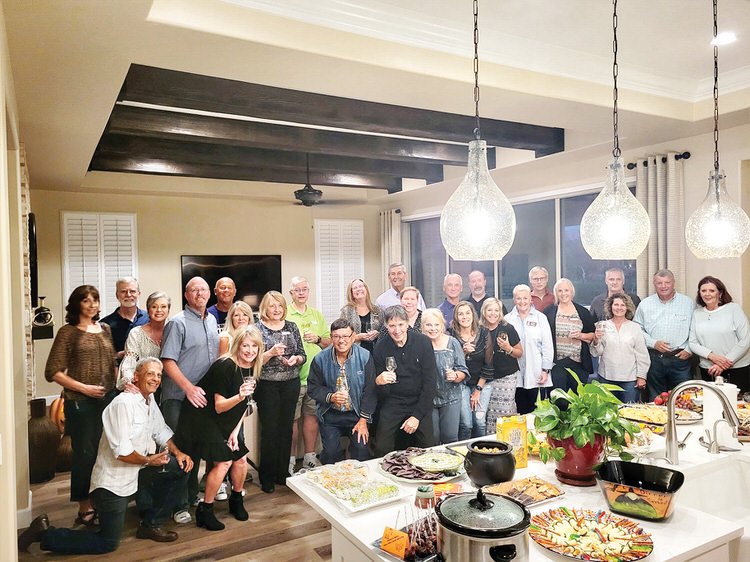 The Unit 6 residents held their first-ever wine tasting event on Oct. 16. Given it was the Halloween season, the theme was “Spooky/Mysterious Wines” hosted at Jes and Linda Chase’s home. The host family supplied the wines and the guests supplied the appetizers, which were not only very spooky but delicious too! Turns out Unit 6 has some pretty creative cooks! 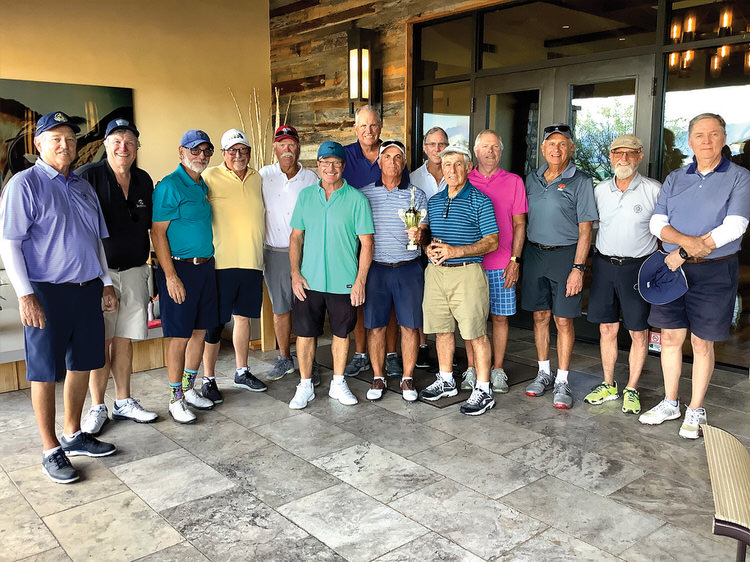 Golf Competition Continues in Unit 8A

On Wednesday, Oct. 20, Unit 8A held their 5th Annual Rick Dahlin Memorial Scramble Golf Tournament at the SaddleBrooke Ranch Golf Course. With wonderful weather and a refurbished golf course, a great time was had by all, with four teams swinging it out—golf clubs, that is—to see which team would take home the honors this year. The team with Bill Oprish at the helm as captain, and his teammates Ernie Nedder, Marty Knezovich, and Bob Townsend, earned those honors with a score of 66 to take home the first place traveling trophy. Following very closely behind was the second place team headed by John Whitehead and his teammates Frank Sherfy, Sam Calbone, and Clarke Latimer. Other winners included Knezovich and Oprish for closest to the pin on two holes, taking home golf towels with the 8A logo. Whitehead, who had the longest drive of the day, took home a golf hat with the Unit 8A logo.

To add to the day’s excitement, Denise Doepke and a group of wives held up the cheering section from Denise’s backyard on the 18th hole.

To end the exciting day in typical Unit 8A fashion, spirits, awards, bragging rights, and socializing were held at the Ranch Grill Patio after the tournament for players and their spouses.

Thanks to Kathy Dahlin for her continued support by providing sleeves of golf balls to all the participants. Also, thanks to the entire planning committee: Bob Authur, Stan Doepke, and Richard Osterlund for their combined efforts and expertise. 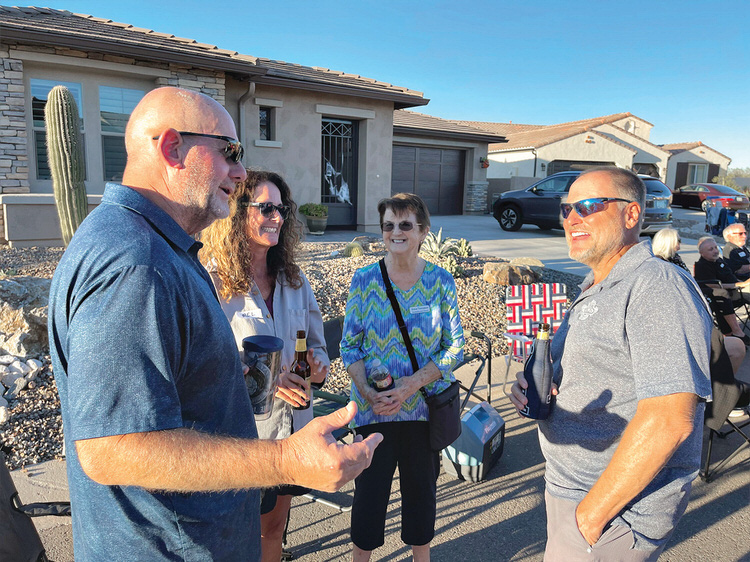 The East Wren Circle cul-de-sac at SaddleBrooke Ranch was transformed into Unit 10’s “Celebration of Summer’s End” on Thursday, Oct. 28. It was an opportunity for neighbors to reconnect after a busy summer travel season and to welcome new residents to the neighborhood. An estimated 90 Ranchers attended. Two local vendors, KT Klassics and Fork & Fire Food Truck, teamed up to provide several hours of classical rock music and sumptuous food. The weather was perfect, with temperatures in the low 80s by late afternoon. Six lucky folks went home with a bottle of wine each and literally dozens of fresh-baked cookies were provided to Unit 10 residents. It was a perfect way to celebrate the conclusion of summer 2021! 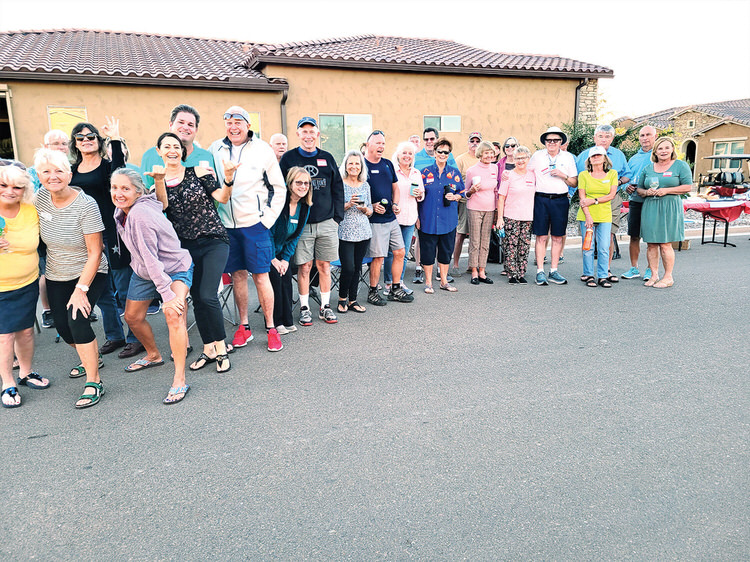 SaddleBrooke Ranch at the Villas 14B hosted their second block party which was a huge success! Everyone brought a dish and visited with their fellow Villa residents! There was music, dancing, and fellowship. 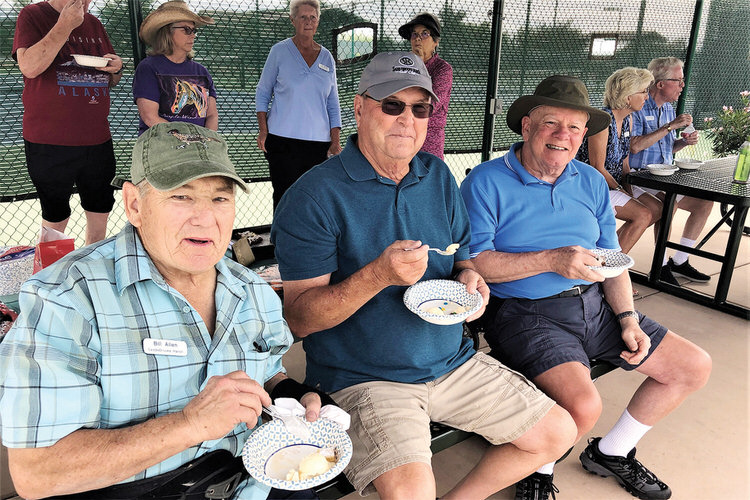 Bill Allen, Steve Fredrickson, and Joe Esterman dig in to their ice cream and fixings. (Photo by Camille Esterman)

Unit 4B Socializes with Ice Cream and Bocce Ball

The SBR bocce ball area was the setting for a Unit 4B ice cream social. Hosts Debbie and Craig Schreiber reserved the use of two bocce ball courts and the covered pavilion for two hours on a beautiful day in October.

Residents arrived with treats in hand: plates of cookies, spice bars, brownies, and lemon bars; bowls of mixed berries, candy toppings, mini M&Ms, and nuts; bottles of assorted syrups; and cans of whipped cream. They had all the ingredients to make a perfect sundae on a picture-perfect Sunday afternoon.

While Craig dished out bowls of ice cream, Debbie eagerly explained the rules of the game and encouraged everyone to play a round of bocce ball. Many residents admitted that this was their first exposure to the game and really enjoyed the experience.

Since the event was cancelled last year due to the pandemic, everyone was ready to reconnect with friends and meet new neighbors. Unit 4B thanks our neighbors, Craig and Debbie Schreiber, for providing buckets of ice cream and organizing this fun annual event. 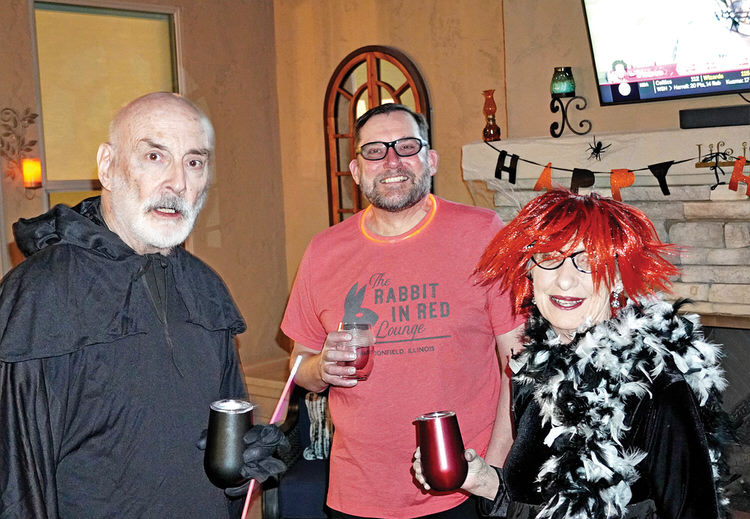 Ken, Henry, and Linda show off their costumes. 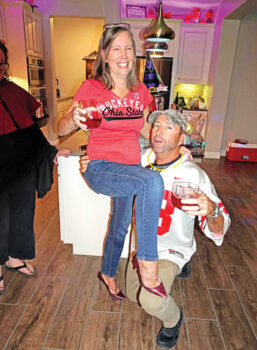 Brian holds up Dar as she tries on Dracula’s stilettos.

Unit 16C is now famous for its first-class Halloween party. The frightful night was hosted by Patty and Joe Cimo, who did a full house of scary creatures, purple lights, witches, and a fabulous witches’ brew that included smoke and worms. Neighbors gathered around a spooky buffet table that included edible false teeth, black cookies, blood red wings, and creepy sandwiches. Costumes were optional, but neighbors who dressed went all out as Father Time, flapper girls and a Dracula with sparkly stilettos. Weather permitted the group to be outside seated around a double fire pit table and comfy patio furniture while bathed in more purple lights. Although they celebrated Halloween, there were too many Ohio State University alumnus not to have the football game on. The golfers all challenged each other on the putting green with Bill McGinn coming out as best putter. If noise makes a great party, this one was a total success.